The Need for Early Referral: Characteristics of Children and Adolescents Who Are Overweight and Obese Attending a Multidisciplinary Weight Management Service

This secondary analysis was performed with day one 24 h recall dietary intake data from 2182 children and adolescents aged 2.0–18.9 years in the National Nutrition and Physical Activity Survey (NNPAS) 2011–12 database (4324.0.55.002—Microdata: Australian Health Survey: Nutrition and Physical Activity, 2011–2012, http://abs.gov.au/AUSSTATS/[email protected]/Lookup/4324.0.55.002Main+Features12011-12). Ethics approval was not required as all data were provided by the Australian Bureau of Statistics (ABS) in de-identified format. Children were invited to take part in the national survey following recruitment of an adult within the household by stratified multistage area sample of private households [17]. Dietary recalls were performed face-to-face (with older children/adolescents or parent proxy), between May 2011 and June 2012 using the Automated Multiple-Pass Method [18], and food model booklet and standard measures assisted portion size estimates. Detailed procedures can be found in the Australian Health Survey User Guide [17]. The majority of recalls (84%, 2–18 y) were performed via proxy (i.e., by parent/adult) with or without assistance from the child depending on child age. Children aged 14–18 y were the primary respondent, with or without assistance from a parent. In contrast to previous descriptive analysis of Australian children’s discretionary choice intake [15] (2–16 y), we included the addition of the 17–18 year old age group, in line with the Australian Dietary Guidelines for children and adolescents [1].

Discretionary choices were classified using the discretionary flag list provided by the ABS; the discretionary flag was assigned to minor food groups (five-digit code) and individual food items (eight-digit code) if they met the definition stated in the dietary guidelines as being high in energy, saturated fat, added sugar, or sodium [19]. Subgroups of discretionary choices were formed based on those previously used [15], using the ABS sub-major grouping (three-digit code, e.g., 131 sweet biscuits) or the minor grouping (5-digit code, e.g., 11,501 soft drinks non-cola, 11,503 soft drinks cola, and 11,505 flavoured mineral water formed the sugar-sweetened soft drinks subgroup) when the sub-major grouping was not appropriate. Similar types of food were grouped together as subgroups; for example, processed meats as mixed foods or in mixed dishes including sausages, rissoles or chicken nuggets were grouped as dishes containing processed meats, whereas sliced ham or chicken loaf, were grouped as processed meats. Due to changes in the latest revision of the Australian Dietary Guidelines and the ABS discretionary flag categorization, we included additional subgroups such as ‘processed meats’ and ‘sweet snack bars’. See Appendix A for the list of 19 discretionary subgroups, and respective food codes, which were used in this analysis.

Dietary intake data included individual food items, grams consumed, and corresponding nutrient profile based on the Australian Food, Supplement and Nutrient Database, AUSNUT 2013—a specifically designed food composition database [20]. All of the individuals were given population weighting factors based on age, gender, state of residence, and season by the ABS for the all respondent sample [17], and were applied to reported intake data to give a dataset weighted to 4,770,094 children and adolescents (as at 31 October 2011). Primary analyses were performed on dietary intake from all of the reporters, rather than only plausible reporters, due to the inability to factor in child growth and lack of appropriate and standardized cut offs for children without measured physical activity level (PAL) [21,22], and for consistency with the methodology with the ABS.

To account for possible extreme under and over reporting, sensitivity analyses (see Supplementary Tables S1 and S2) were performed with only plausible consumers (i.e., sufficient energy intake to sustain life) as per the Goldberg cut off method [23,24]. The Goldberg method compares energy intake (EI) to basal metabolic rate (BMR) ratio with energy expenditure (PAL) [24]. EI:BMR provided in the NNPAS data set was used, with plausible reporters being considered those within two standard deviations of a PAL of 1.55, and cut offs for under reporters as less than 0.87 and over reporters over 2.74. Respondents with missing EI:BMR (n = 507, due to missing weight data) were included with plausible reporters, as we were unable to assess if their reported intake was plausible. Three-hundred and fifty children and adolescents were determined to be non-plausible (n = 261 under-reporters, n = 89 over-reporters), leaving 2462 plausible reporters (n = 4,181,497 population weighted).

Analyses were conducted to determine: (1) per capita, and (2) per consumer intake of discretionary choices. Per capita analyses were performed for 2–18 year olds using the summation of grams, energy (kJ, with fibre), saturated fat (g), added sugars (g) and sodium (mg) intake divided by the total population, to give population aggregated mean absolute quantity, energy, and nutrient values. Percentage of total energy and nutrient intake was calculated using the total diet (including all foods and drinks) values for 2–18 year olds of quantity 2402 g, energy 7998 kJ, saturated fat 29 g, added sugar 58 g, and sodium 2313 mg.
Per consumer absolute intake was calculated using the same approach, but using discrete consumer populations for each discretionary subgroup, based on the number of survey respondents consuming at least one food item within the subgroup. Per consumer data analyses were performed for the whole sample (2–18 year olds) and repeated for the following age groups: 2–3, 4–8, 9–13, 14–16, and 17–18 year olds, with age specific population values. All data presented in the tables are expressed as absolute values. To keep denominators constant quantity, energy, and nutrient percentage of total diet presented for consumers were based on mean total intake for the age group (including consumers and non-consumers).
All of the population sizes, number of consumers and combined quantity, energy, and nutrient values were obtained from the dataset in IBM SPSS Statistics (Version 23; SPSS Inc., Chicago, IL, USA) and were divided by the relevant population, and percentage of total diet calculations were performed in Microsoft Excel 2013 (Microsoft Corporation, Redmond, WA, USA). Results are presented for subgroups that were consumed by more than 5% of the 2–18 year old sample and contributed to 1% or more of total energy, saturated fat, added sugars, or sodium in the overall diet, which is consistent with previous analyses [15].

Table 1 shows the per capita intake of discretionary choice subgroups by children and adolescents aged 2–18 years. Nearly all (99%) of the children and adolescents consumed at least one discretionary choice subgroup on the day prior to the survey, with sweet biscuits (31%), potato crisps and similar snacks (27%), and sugar-sweetened soft drinks (25%) the being most commonly consumed choices, consumed by over one-quarter of children. Cakes, muffins and slices (4%), sweet biscuits (3%), and potato crisps and similar snacks (3%) were top contributors to energy intake. Cakes, muffins and slices (4%) also contributed largely to saturated fat (5%), and added sugars (11%) intake. The fourth largest contributor to energy intake was dishes containing processed meats (2.5%), which was also a top contributor to saturated fat (5%) and sodium (5%) intake. Other top contributors to energy and nutrient intakes were ice-cream and ice-blocks (5% saturated fat), fruit drinks (8% added sugars), processed meats (6% sodium) and cereal-based takeaway foods (4% sodium).

When analyses were undertaken in the sub-sample of plausible reporters, the pattern of results remained consistent (Supplementary Tables S1 and S2). Per capita commonly consumed foods for plausible reporters were sweet biscuits 32%, potato crisps and similar snacks 28%, and sugar-sweetened soft drinks 24%. In the plausible reporter analyses, processed meats emerging as the third most common subgroup (25%) and also the top contributor to energy intake (4%). Cakes, muffins and slices remained a large contributor to energy (4%), saturated fat (5%), and added sugars (9%) intake. Top subgroups contributing to saturated fat, added sugar and sodium were comparable to all of the reporters with the exception of sweet snack bars identified as the largest contributor to saturated fat (5%).
Per consumer plausible reporters by age group again had similar patterns to all reporters. Commonly consumed foods primarily remained within the top three subgroups across age groups, however within adolescents (14–18 y) dishes containing processed meats emerged as the second most commonly consumed (31–41%). Cereal-based takeaway foods (26%), cakes, muffins and slices (20%), meat pies and other savoury pastries (19%), and dishes containing processed meats (14%) remained the largest contributors to total energy intake in 2–18 year olds, and across age groups. These subgroups were still amongst the top contributors to saturated fat and sodium (except for cakes, muffins and slices), across age groups. Sugar-sweetened soft drinks (52–61% 4–18 y) or fruit drinks (72% 2–3 y), cordials (39–82%) and cakes, muffins and slices (30–63%) were consistently high contributors to added sugar, across age groups and all reporters.

In conclusion, Australian children and adolescents aged 2–18 years continue to source nearly 40% of their daily energy intake from discretionary foods that are high in saturated fat, sodium, and/or added sugars. Cakes and biscuits, cereal-based takeaway foods, dishes containing processed meats, and sugary drinks are the optimal targets for interventions to reduce discretionary choices intake. These food targets are likely to have the biggest impact to moderate energy intake, while also reducing intakes of saturated fat, sodium, and/or added sugars.

B.J.J is supported by an Australian Government Research Training Program Scholarship. L.K.B and D.Z. are supported by a National Health and Medical Research Centre for Research Excellence (1101675). 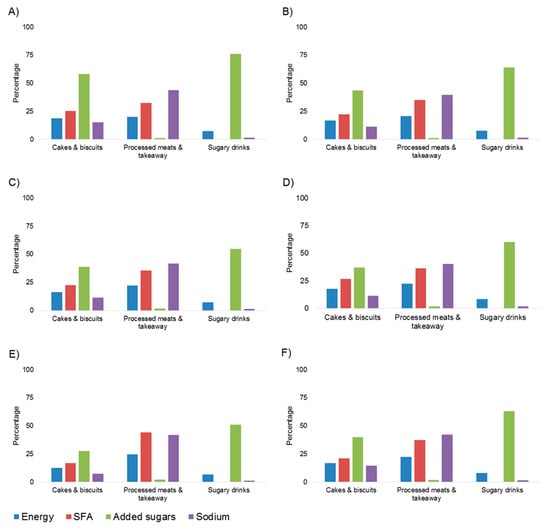 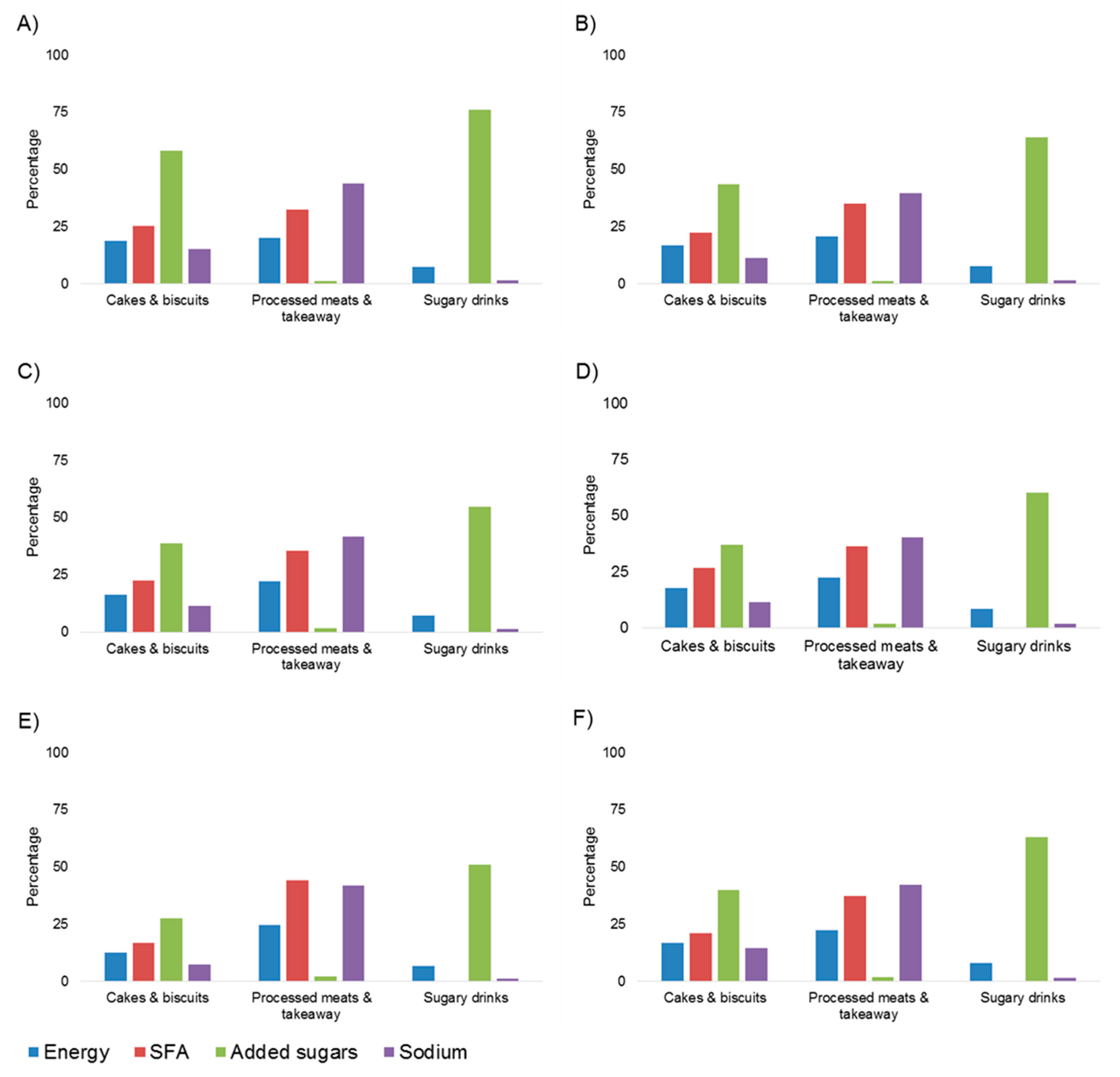