Could Cognitive Behavioural Therapy Be an Effective Treatment for Long COVID and Post COVID-19 Fatigue Syndrome? Lessons from the Qure Study for Q-Fever Fatigue Syndrome
Next Article in Special Issue

Evaluation of a Prehospital Rotation by Senior Residents: A Web-Based Survey
Previous Article in Journal

Toward COVID-19 Information: Infodemic or Fear of Missing Out?

Background: Emergency Medical Services (EMS) plays a fundamental role in providing good quality healthcare services to citizens, as they are the first responders in distressing situations. Few studies have used available EMS data to investigate EMS call characteristics and subsequent responses. Methods: Data were extracted from the emergency registry for the period 2013–2017. This included call and rescue vehicle dispatch information. All relationships in analyses and differences in events proportion between 2013 and 2017 were tested against the Pearson’s Chi-Square with a 99% level of confidence. Results: Among the 2,120,838 emergency calls, operators dispatched at least one rescue vehicle for 1,494,855. There was an estimated overall incidence of 96 emergency calls and 75 rescue vehicles dispatched per 1000 inhabitants per year. Most calls were made by private citizens, during the daytime, and were made from home (63.8%); 31% of rescue vehicle dispatches were advanced emergency medical vehicles. The highest number of rescue vehicle dispatches ended at the emergency department (74.7%). Conclusions: Our data showed that, with some exception due to environmental differences, the highest proportion of incoming emergency calls is not acute or urgent and could be more effectively managed in other settings than in an Emergency Departments (ED). Better management of dispatch can reduce crowding and save hospital emergency departments time, personnel, and health system costs. View Full-Text
Keywords: emergency medical services; information systems; prehospital intervention; population surveillance emergency medical services; information systems; prehospital intervention; population surveillance
►▼ Show Figures 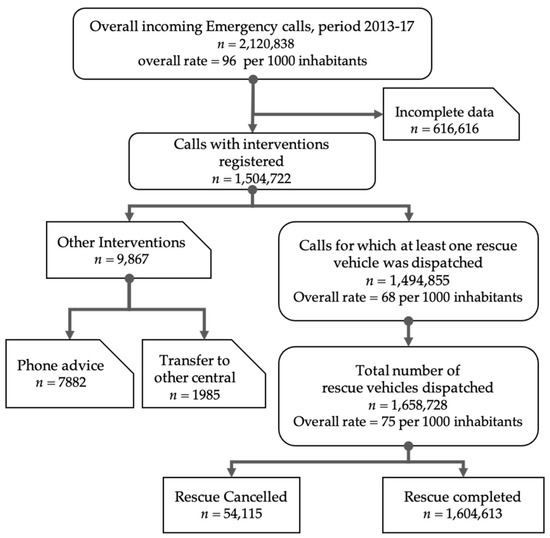