Are Individuals Perceived as More Attractive within a Group? A Confirmative Study of Group Attractiveness Effect and the Cheerleader Effect in China
Next Article in Special Issue

Prevalence Of, and Factors Associated with, Obesity among the Oldest Old. A Study Protocol for a Systematic Review

Loss of bone tissue and bone strength occurs with aging, and is accelerated in menopausal women [1]. Osteoporosis, a condition marked by low bone mass, is three times more common in women compared to in men [2]. Low bone density can result in hip fractures [3]. A study reported that among adults who could previously perform activities of daily living (ADL) independently, only 36% returned to independence, 27% survived but required ADL assistance, and 37% died 6 months to 2.5 years following a hip fracture [4]. Therefore, it is important for older women to maintain bone health to prevent fractures.
Muscle mass also reduces with aging [5,6], and age-related loss of bone and muscle mass occurs almost simultaneously [7]. Muscle mass is related to bone mass in postmenopausal women [8]. However, studies have reported inconsistent findings on the association between muscle mass and bone mineral density in older women. One study reported that muscle mass is related to bone mineral density in older adults [9], whereas another study reported that age-related muscle loss does not seem to be involved in bone mass loss [10].
It is helpful for health professionals to understand the characteristics of muscle mass in older women diagnosed with low muscle mass, in order to maintain their bone health and reduce the risk of fractures. The aim of this study was to investigate the characteristics of muscle mass in older women who have low bone mass. Furthermore, we investigated the characteristics of muscle strength and physical performance in these women, because it is possible that muscle mass is related to muscle strength, which influences physical performance [11].

The design of this study was cross-sectional and was conducted in 2019 in accordance with the Declaration of Helsinki and was approved by the ethics committee of the Kyoto Tachibana University (approval number: 18–26). Public information papers were used to recruit 306 community-dwelling older adults. Data on participants’ age, height, and weight were collected after which participants completed the Mini-Mental State Examination (MMSE). In addition, information regarding the prevalence of disease, such as osteoporosis, hypertension, hyperglycemia, orthopedic disease, diabetes mellitus, cardiovascular disease, pulmonary disease renal disease, and cancer, was obtained from the participants. Inclusion criteria were as follows: (1) age ≥ 60 years, (2) no cognitive impairment (MMSE score ≥ 24), and (3) ability to complete all measurements. The exclusion criteria were: (1) male sex, (2) implanted with a cardiac pacemaker, and (3) receiving treatment for osteoporosis. The final analysis used data from 214 participants (Figure 1).

Bone mass was measured at the right calcaneus by bone quantitative ultrasonometry using Benus evo (Nihon Kohden Co., Tokyo, Japan). T-scores, which is the standard deviation when compared with the young adult mean, were obtained, based on which participants were divided into three groups in accordance with the criteria published by the World Health Organization (WHO): normal (T-score > −1), low (−2.5 < T-score ≤ −1), and very low (T-score ≤ −2.5) bone mass [2]. The diagnostic criteria of T-scores published by the WHO have not been recommended to apply to T-scores obtained from quantitative ultrasound [12]. However, we used the WHO’s criteria as cut-offs to divide participants into groups, because the cut-offs of parameters obtained from quantitative ultrasound are unclear.

Grip strength and knee extension strength were used to determine participants’ physical performance, as described in Abe et al. [14]. Participants gripped a hand grip dynamometer (T.K.K.58401, Takei Scientific Instruments Co., Ltd., Niigata, Japan) as hard as possible and grip strength were recorded. Grip strength of both right and left limbs were measured, and the highest value was used for the analysis.
Knee extension strength was measured using a hand-held dynamometer (μTas F-1; Anima Corp., Tokyo, Japan) as described in Bohannon [15]. Participants sat with their knees and hips flexed at 90° and participants performed maximal isometric muscle contraction. Measurements were performed for both right and left legs, and the highest value was used for the analysis.

Gait speed and the timed up and go (TUG) test were used to determine participants’ physical performance. Participants walked at their usual speed and as fast as possible along an 11 m course, which included 3 m of acceleration and 3 m of deceleration zones at each end. The walking time spent in the middle 5 m course was measured using a digital stopwatch. Gait speed was expressed as m/s.
The TUG test was performed with a minor modification [16]. In a previous study, participants performed at the usual pace [16], whereas they were asked to perform at the fastest pace in the present study. Participants stood up from a chair without arm rests, walked along a 3 m course, turned around, walked back, and sat on the chair again as fast as possible. The time taken to complete the TUG test was measured using a digital stopwatch.

Sarcopenia was evaluated according to criteria published by the Asian Working Group for Sarcopenia in 2014 [17]. Participants were evaluated as having sarcopenia when they had low muscle mass (appendicular SMI < 5.7 kg/m2) with either low muscle strength (grip strength < 18 kg) or low physical performance (usual gait speed < 0.8 m/s) [17].

This research was funded by the Japanese Physical Therapy Association. 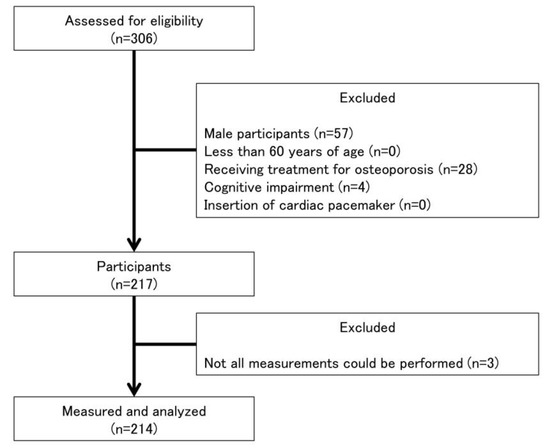