Signs in People with Intellectual Disabilities: Interviews with Managers and Staff on the Identification Process of Dementia
Next Article in Special Issue

PTSD in U.S. Veterans: The Role of Social Connectedness, Combat Experience and Discharge

Serving in the U.S. military provides a substantial opportunity for a sense of community, belonging and understanding. Re-establishing a new sense of community is essential for veterans transitioning out of the military and into civilian life. However, developing a new sense of connectedness is one of many challenges separating service members may face. Little is known about the role social connectedness may play in promoting positive transition outcomes.
One such challenge transitioning veterans may encounter is unmet mental health needs, particularly posttraumatic stress disorder (PTSD). Evidence suggests that veterans are especially at risk of developing PTSD due to the potential stressors associated with combat exposure and military-related trauma. The prevalence of PTSD among veterans ranges from 11 to 30% based on the area of service [1,2]. Research indicates that an estimated 30% of Vietnam, 10% of Gulf War, 15% of Iraq veterans and 11% of veterans returning from Afghanistan struggle with PTSD [1,2,3]. PTSD is a result of traumatic or stressful life events, and it can interfere with social, physical and psychological functioning. PTSD is characterized by intrusive thoughts in which the trauma is re-experienced, avoidance of situations that might trigger the trauma, a state of hyperarousal or vigilance and negative alterations in cognition and mood which may cause irritability and aggression [4,5]. Veterans with trauma exposure and PTSD are more susceptible to sleep disorders, mood changes, reckless behavior, substance use and isolation which may impede a successful transition from military to civilian life [1,5].
One of the primary risk factors for the development of PTSD is combat exposure. Extensive research identifies combat exposure as a strong predictor of health and psychological complications in veterans due to the risk of physical injury, psychological trauma and other stressors related to war [6,7]. A recent study examined associations between combat exposure and physical and psychological health focusing on the physical pain, PTSD and depression in veterans. The findings indicate that veterans exposed to combat had greater pain intensity and as a result higher PTSD and depression symptoms in comparison veterans without combat exposure [7].
Another factor associated with negative outcomes during transition is non-honorable discharge status. As qualification for benefits is determined by discharge status, the roughly 16% of veterans who leave the military with non-honorable discharge status are often met with additional barriers to getting care, which can create significant transition challenges [8,9]. With limited access to services, veterans with non-honorable discharge status are at increased risk of adverse mental health outcomes including PTSD [10].
Among the challenges that military veterans encounter during their transition from military to civilian life is a loss of social connectedness. Social connectedness refers to an individual’s internal sense of belongingness to the social environment [11]. Social connectedness impacts interpersonal relationships, peer affiliation, memberships, social behavior and overall social integration throughout the lifespan [12]. There are health and psychological benefits linked to social connectedness. Documented benefits to social connectedness include intimacy, sense of sharing and belonging [13]. Existing research shows that experiencing a higher sense of social connectedness may serve as a protective factor against psychological distress, depression, PTSD, low self-esteem and suicidal ideation [14,15]. The need for social connection is fundamental to the successful reintegration of veterans into civilian life. With the loss a sense of community, identity and belongingness often provided by the military, the inability to find a new sense of social connectedness may create difficulty for veterans interacting in the civilian world. This can lead to isolation and further transition challenges.
While it is well established that veterans may struggle in their transition out of the military and into civilian communities, little has been done to examine this transition in relation to social connectedness and its impact on risk factors and transition outcomes. The purpose of this study is to explore the effect of combat exposure, non-honorable discharge status, and social connectedness on PTSD symptoms in individuals who have served in the U.S. military.

Data used for this study were drawn from a community-based needs assessment involving veterans living in the San Francisco Bay Area [16]. Multiple recruitment strategies were utilized to achieve representativeness of the veteran population in the San Francisco Bay Area. Utilizing two methods for reaching potential participants, researchers partnered with higher-learning institutions and local agencies which serve veterans in the San Francisco Bay Area. The first method utilized an online survey approach by which the agency would send out an invitation and survey link to veterans within their database. The second method used an on-the-ground survey approach by which agencies would work with researchers to organize data-collection events within their respective organizations. Those who agreed to participate were sent either a paper survey copy or the online survey link. The final sampling strategy used print advertisements and social media to reach out to veterans within the San Francisco community. Avenues such as Facebook, Twitter, LinkedIn, mass emails and the survey website promoted the survey opportunity to potential participants. The survey took approximately 30 to 90 min to complete. All participants received a $15 gift card. All data collection procedures were approved by the University of Southern California (UP-15-00697) Institutional Review Board.

PTSD: The Posttraumatic Stress Disorder Checklist 5 (PCL-5) [17], a 20-item measure on a 0–4 Likert-type scale, was used to measure PTSD. The PCL-5 is a four-factor measure indexing disturbances in intrusive thoughts, physical arousal, cognitive, and avoidance symptoms. Responses to the 20 items result in a score from 0–80, with a cut-point score of 33 [18]. Sample items include “in the past month, how much were you been bothered by: Repeated, disturbing, and unwanted memories of the stressful experience?” and “in the past month, how much were you been bothered by: Feeling jumpy or easily startled?” Cronbach’s alpha for the PCL was 0.97 in these data.
Combat experiences: The 13-item short version of the Combat Experiences Scale [19] was used to measure combat experiences. Scale items are dichotomous and capture common impactful deployment-related experiences like receiving enemy fire and seeing dead bodies. Scores range from 0–13. Cronbach’s alpha for the CES was 0.90 in these data.
Discharge status: Participants reported honorable discharge or one of seven possible non-honorable discharge statuses, including general under honorable conditions, other than honorable, bad conduct discharge, dishonorable discharge, dismissal (officer), uncharacterized or other. These categories were summed to produce a dichotomous variable capturing any non-honorable discharge.
Social connectedness: The Social Connectedness Scale [20], an 8-item measure scored on a 6-point Likert scale, indexed social connectedness. The scale was developed based on the theory of self-psychology and measures feelings of belongingness. The scale was validated in a study with 626 undergraduate students and was found to have good test stability over a 2-week period (0.96) and strong internal reliability (0.91). Sample items include “I feel disconnected from the world around me” and “even around people I know, I don’t feel that I really belong”. Scores range from 8–48. Cronbach’s alpha for the Social Connectedness Scale was 0.94 in these data.

While transition from the military has received considerable attention as a point of intervention for promoting veteran success, little has been done to explore the role community and social connections may have in encouraging a positive transition. Findings demonstrate that facilitating the development of new social connections may serve as a protective factor in the development of PTSD symptoms. The results also indicate this may be particularly true for vulnerable veterans, such as those who have experienced combat and veterans with a non-honorable discharge status.

The study was funded by Wells Fargo. 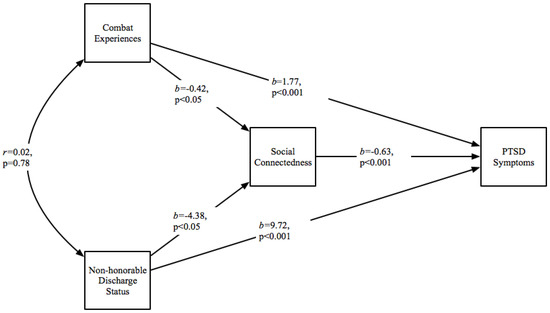 Table 2. Sample descriptive statistics.
Table 2. Sample descriptive statistics.
© 2018 by the authors. Licensee MDPI, Basel, Switzerland. This article is an open access article distributed under the terms and conditions of the Creative Commons Attribution (CC BY) license (http://creativecommons.org/licenses/by/4.0/).
We use cookies on our website to ensure you get the best experience. Read more about our cookies here.
Accept
We have just recently launched a new version of our website. Help us to further improve by taking part in this short 5 minute survey here. here.
Never show this again