The infiltration phenomena has been studied by several authors for decades, and numerical and approximate results have been shown through the asymptotic solution in short and long times. In particular, it is worth highlighting the works of Philip and Parlange, who used time and volumetric content as independent variables and space as a dependent variable, and found the solution as a power series in that is valid for short times. However, several studies show that these models are not applicable to anomalous flows, in which case the application of fractional calculus is needed. In this work, a fractional time derivative of a Caputo type is applied to model anomalous infiltration phenomena. Fractional horizontal infiltration phenomena are studied, and the fractional Boltzmann transform is defined. To study fractional vertical infiltration phenomena, the asymptotic behavior is described for short and long times considering an arbitrary diffusivity and hydraulic conductivity. Finally, considering a constant flux-dependent relation and a relation between diffusivity and hydraulic conductivity, a fractional cumulative infiltration model applicable to various types of soil is built; its solution is expressed as a power series in , where is the order of the fractional derivative. The results show the effect of superdiffusive and subdiffusive flows in different types of soil. View Full-Text
Keywords: asymptotic solution; parlange equations; Darcy’s law; fractional Caputo derivative asymptotic solution; parlange equations; Darcy’s law; fractional Caputo derivative
►▼ Show Figures 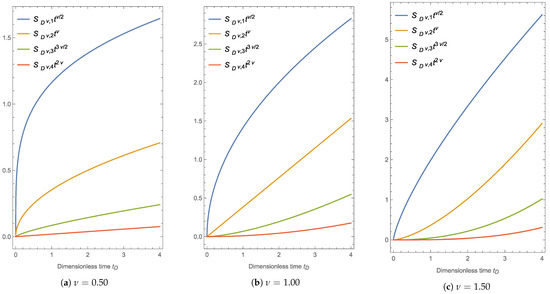