The present study emphasizes the efficacy of a biosurfactant-producing bacterial strain Klebsiella sp. KOD36 in biodegradation of azo dyes and hexavalent chromium individually and in a simultaneous system. The bacterial strain has exhibited a considerable potential for biodegradation of chromium and azo dyes in single and combination systems (maximum 97%, 94% in an individual and combined system, respectively). Simultaneous aerobic biodegradation of azo dyes and hexavalent chromium (SBAHC) was modeled using machine learning programming, which includes gene expression programming, random forest, support vector regression, and support vector regression-fruit fly optimization algorithm. The correlation coefficient includes the dispersion index, and the Willmott agreement index was employed as statistical metrics to assess the performance of each model separately. In addition, the Taylor diagram was used to further investigate the methods used. The findings of the present study were that the support vector regression-fruitfly optimization algorithm (SVR-FOA) with correlation coefficient (CC) of 0.644, (scattered index) SI of 0.374, and (Willmott’s index of agreement) WI of 0.607 performed better than the autonomous support vector regression (SVR), gene expression programming (GEP), and random forest (RF) methods. In addition, the standalone SVR model with CC of 0.146, SI of 0.473, and WI of 0.408 ranked the second best. In summary, the SBAHC can be accurately estimated using the hybrid SVR-FOA method. In other words, FOA has proven to be a powerful optimization algorithm for increasing the accuracy of the SVR method. View Full-Text
Keywords: biodegradation; chromium; azo dyes; prediction; SVR-FOA biodegradation; chromium; azo dyes; prediction; SVR-FOA
►▼ Show Figures 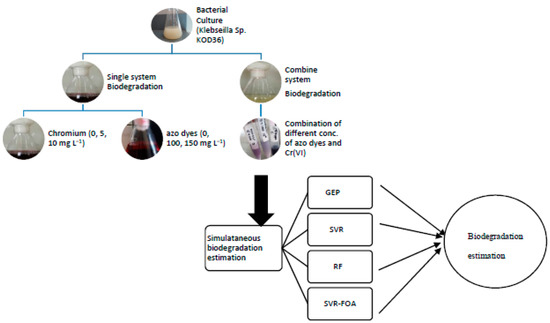