Systems working in discrete time (discrete event systems, in short: DES)—based on binary operations: the maximum and the minimum—are studied in so-called max–min (fuzzy) algebra. The steady states of a DES correspond to eigenvectors of its transition matrix. In reality, the matrix (vector) entries are usually not exact numbers and they can instead be considered as values in some intervals. The aim of this paper is to investigate the eigenvectors for max–min matrices (vectors) with interval coefficients. This topic is closely related to the research of fuzzy DES in which the entries of state vectors and transition matrices are kept between 0 and 1, in order to describe uncertain and vague values. Such approach has many various applications, especially for decision-making support in biomedical research. On the other side, the interval data obtained as a result of impreciseness, or data errors, play important role in practise, and allow to model similar concepts. The interval approach in this paper is applied in combination with forall–exists quantification of the values. It is assumed that the set of indices is divided into two disjoint subsets: the E-indices correspond to those components of a DES, in which the existence of one entry in the assigned interval is only required, while the A-indices correspond to the universal quantifier, where all entries in the corresponding interval must be considered. In this paper, the properties of EA/AE-interval eigenvectors have been studied and characterized by equivalent conditions. Furthermore, numerical recognition algorithms working in polynomial time have been described. Finally, the results are illustrated by numerical examples. View Full-Text
Keywords: discrete events system; max–min (fuzzy) algebra; interval matrix; interval eigenvector discrete events system; max–min (fuzzy) algebra; interval matrix; interval eigenvector
►▼ Show Figures 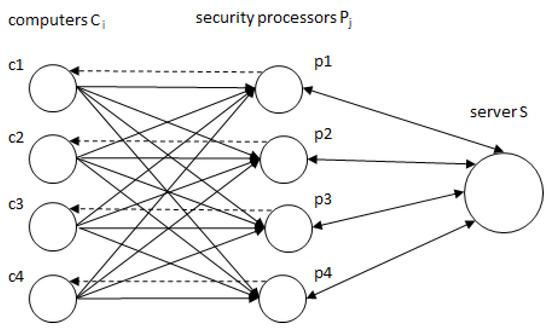