:
The reaction times of individuals over consecutive visual stimuli have been studied using an entropy-based model and a failure machinery approach. The used tools include the fast Fourier transform and a spectral entropy analysis. The results indicate that the reaction times produced by the independently responding individuals to visual stimuli appear to be correlated. The spectral analysis and the entropy of the spectrum yield that there are features of similarity in the response times of each participant and among them. Furthermore, the analysis of the mistakes made by the participants during the reaction time experiments concluded that they follow a behavior which is consistent with the MTBF (Mean Time Between Failures) model, widely used in industry for the predictive diagnosis of electrical machines and equipment.
Keywords:
reaction time; visual stimuli; fast Fourier transform; spectral analysis; MTBF model

The literature relates an important number of works on human reaction times to visual stimuli [1,2,3,4,5,6,7,8]. Fast responding is a very common scenario in daily life and in a broad variety of situations in industry [9], behavioral economics, finances [10], sports [11], and health [12], just to mention just a few examples.
The response time (RT) data have been proven to be correlated to cognitive disorders [8,13,14]. The most commonly diagnosed cognitive disorder in childhood affecting the RT is the Attention Deficit and Hyperactivity Disorder (ADHD). For instance, ADHD and autism spectrum disorder in children aged 7–10 years have been studied in reference [15] in order to gain insights into the attentional fluctuations, related to increased response time variability.
The fast Fourier transform (FFT) has been used to study the intra-individual variability (IIV) in children with ADHD. For instance, an FFT analysis of response time data in reference [16] revealed that there is a characteristic periodicity (frequency of 0.05 Hz) in children with ADHD. Similar studies yielded a periodicity at low frequency (0.03–0.07 Hz) observed in several tasks, namely, Sustained Attention to Response Task (SART) [17], the Ericksen Flanker Task [18], and the Go/NoGo Task [19].
On the other hand, error rates during response time experiments have been intensively studied in the literature as they retain important information about the neurological disorder under study. For children with ADHD, a relationship between error rates and the ex-Gaussian parameters of the response times has been found [20]. Similarly, increased error rates and long response times have been also found in developing readers and adults during yes/no and go/no-go tasks [21].
In this work, we will apply spectral analysis techniques such as the fast Fourier transform and entropy of the spectrum in order to get insights into the correlations and patterns in the response times of a group of individuals over consecutive visual stimuli. We will also perform a failure analysis of the mistakes made by the individuals while responding to the visual stimuli.
This article is organized as follows. In Section 2, the description of the sample (Section 2.1) along with the response time experiments (Section 2.2) are included. In Section 3, the methods used for the data analysis are described. The Results and Discussion are presented in Section 4, and the Conclusions in Section 5.

2. Description of the Sample and Visual Stimuli Experiments

A sample of 190 school-aged children from Valencia (Spain) took part in the computer-based experiments. The ages ranged from 8 to 10 years. Prior to the experiments, we made sure that all participants were healthy and had no brain injury, seizures, or any other neurological issue. The experiments were performed under the authorizations of the school management and the Regional Authority for Education. We also followed the recommendations of the Secretariat of Education of the Valencian Community and a protocol approved by the Government of Valencia. We also obtained the consent of the children’s parents or legal guardians as stated by the Declaration of Helsinki [22].

For the reaction time experiments, a child version of the Attentional Network Test (ANT Child) was chosen [23]. Every computerized experiment lasted for about 6–7 min in which 166 stimuli were presented randomly to the participants for 2500 s. The visual stimuli were very simple and uncorrelated to any cultural background or educational training. The reaction times were recorded by DMDX [24], a Windows program widely used in the literature [8,25,26,27]. During each trial, 5 black fish in a white background and aligned horizontally were presented. The participants were asked to identify the right direction of the central fish by pressing the “M” key (the fish looking to the right) or “Z” otherwise. In general, Attention Network Tasks like the one in this work, pursue to assess three attentional networks: alerting, orienting, and executive control [28], which are closely related among themselves [29,30]. Alerting network is assessed by changes in reaction time depending on a warning signal. Orienting is related to changes in the RT depending on where the target appears on the screen. Finally, the efficiency of the executive control is tested by asking the children to answer about the direction of an image placed at the center in between neutral, congruent, or incongruent flankers. The neutral case was when there was only the central fish. The congruent case was where the surrounding fish were placed in the same direction as the central fish. The third case was where the surrounding fish were placed in the opposite direction in respect to the central one. In total, our experiments involved 166 × 190 = 31540 reaction times.

For finite duration discrete-time signals (which represents the signal to be processed) with N points of length, the classic method for estimation of the spectrum using the fast Fourier transform is defined as where is the instantaneous frequency of the signal to be processed, is the imaginary unit, and is the amplitude spectrum of the vector response times. The spectrum-based analysis is used as a supplement to the calculation of spectral entropy [31].
The entropy of a discrete-valued random variable attains a maximum value for a uniformly distributed variable. Considering a discrete random variable with states and state probabilities , that is , the entropy of is defined as
According to Equation (2), the spectral entropy of the signal is a measure of its spectral power distribution. The concept is based on Shannon’s entropy, which quantifies the amount of information as well as its coherence. The spectral entropy treats the normalized energy distribution of the signal in the frequency domain as a probability distribution and calculates its Shannon entropy. Then, for a signal , the power spectrum is defined as the square value of Equation (1):
The probability distribution is then where is the individual energy contribution for each data sample. Then, the spectral entropy, , is defined as [31]:
Normalizing: where is the total number of frequency points. The denominator, represents the maximal spectral entropy of white noise, uniformly distributed in the frequency domain with flat power spectrum.
Once Equation (6) has been obtained, if the Pearson correlation coefficient based on the data covariance matrix is applied to the result, in order to search for linearity in the uniformity patterns, the following is obtained: where is the matrix of pairwise covariance calculations between each variable, used to quantify the spectral content in terms of energy, that is, to quantify the group coherence, as a linearity relationship in a vector by means of its spectral energy.

To model the failures of each one of the participants, the use of the mean spectral entropy over the total sample of 190 participants is proposed, and following the analogy that may exist with the MTBF (Mean Time Between Failures) model that can be defined in terms of the expected value of the failure density function, namely :
Let be a discrete matrix where correspond to a row, column index and and are the number of rows and columns respectively in the matrix. Then, the mean value for each row of the discrete matrix is given by where and are the total number of points and the row index, respectively. Substituting Equation (9) in Equation (1) and applying the power spectrum, we have
Performing the probability distribution (according to Equation (4)) of Equation (10) and applying the spectral entropy, we have
The Equation (11) describes the proposed algorithm for the failures process in the experiment described in Section 2 and whose result is associated with the discrete MTBF machinery failures model: where is the number of points in the vector , a discrete random variable with probability function .

Reaction times from visual stimuli experiments have been analyzed using a machinery failure approach and a spectral analysis. Results from the spectral analysis through the Fourier transform show that the participants have patterns in the responses along a series of visual stimuli, where the fundamental frequency for these experiments locates at 0.1 item−1, that is, every 10 items (every around 7.5 s). Similarly, the correlation analysis based on the spectral entropy showed that there are correlations among the reaction time series of the participants who carry out the experiments independently and without exchanging information. This result can be rationalized by considering that the participants form a system or a collective whose responses are not independent from one another. On the other hand, the analysis of the mistakes made by the participants while responding to the visual stimuli shows that they follow a behavior consistent with the MTBF model used in the industry for the predictive diagnosis of electrical machines and equipment. 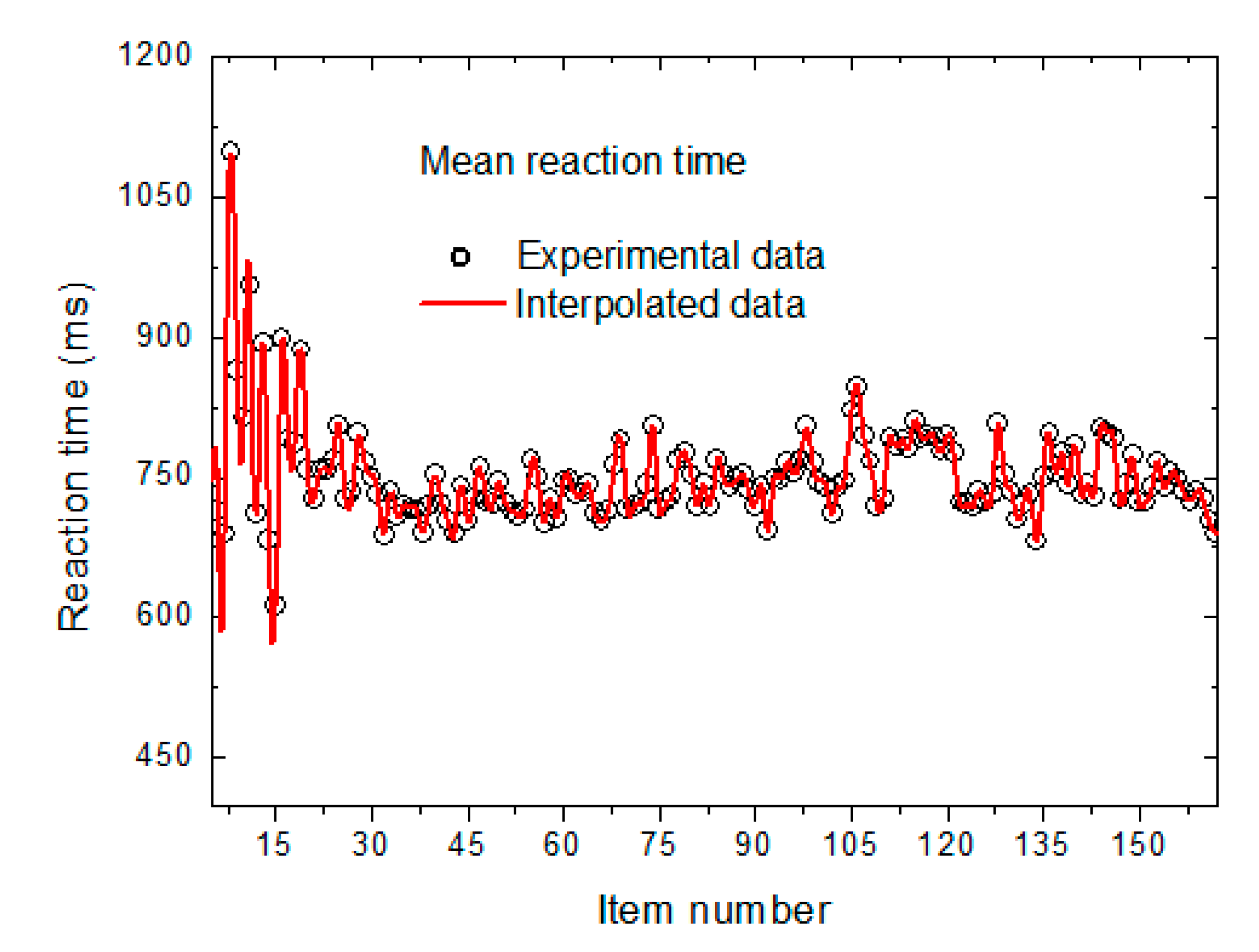 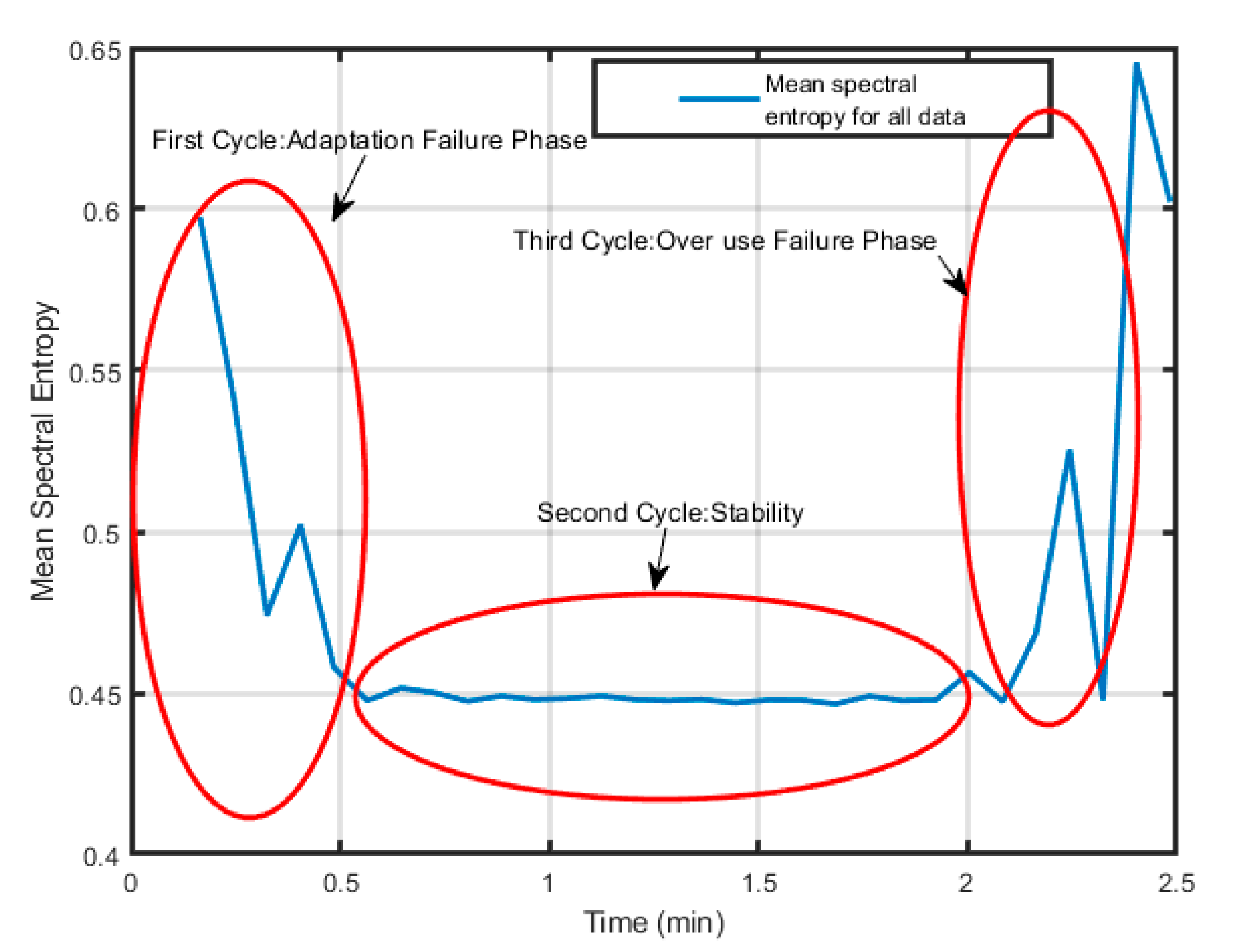