A cancer cell’s ability to rapidly adapt to targeted reagents is a major hurdle to the success of targeted therapy for cancer treatment. Examples include the compensatory activation of PI3K/Akt following mTOR inhibition driven by upstream receptor tyrosine kinase activation [1,2,3,4] and feedback activation of B- and C-RAF upon MEK inhibition, especially in the context of RAS-driven cancers [5,6]. This adaptive resistance is complicated by the diversity of kinases and enzymes expressed in cancer cells functioning in interconnected networks; thus, systematically examining how cancer cells respond to drugs could offer novel insights into adaptive resistance mechanisms and point toward effective drug combinations [7,8].
Mass spectrometry-based quantitative proteomics has been employed to assess altered signaling networks after drug treatment at a system-wide level. Gary Johnson and his colleagues developed a chemical proteomics method employing multiplexed kinase inhibitor beads followed by mass spectrometry analysis, allowing a system-wide measurement of drug-induced kinase activity/expression. This platform was employed to assess kinome adaptations to kinase inhibitors in multiple cancer models, including triple-negative breast cancer treated with MEK inhibitor selumetinib [9] and HER2-positive breast cancer treated with HER2 inhibitor lapatinib [10]. These studies highlighted drug-induced dynamic kinome reprogramming involving reactivation of co-expressed receptor tyrosine kinases in response to kinase inhibitors. The multiplexed kinase inhibitor bead approach also revealed differential kinome expression/activity between parental and leukemia cells with acquired drug resistance to BCR-Abl inhibitor imatinib [11].
As an alternative approach that has shown utility in charting rapid dynamic responses, profiling drug-induced global phosphoproteome changes has identified key adaptive changes linked to drug resistance. A tyrosine phosphorylation profiling in DDR2 mutant squamous lung cancer cells treated with its tyrosine kinase inhibitor dasatinib revealed key compensatory receptor tyrosine kinase activations linked to intrinsic drug resistance [12]. This approach also revealed differential drug-induced tyrosine phosphoproteome responses between naïve and drug-resistant EGFR mutant lung cancer cells to EGFR tyrosine kinase inhibitor [13]. Global phosphoproteome (phospho-Ser/Thr/Tyr) profiling showed that ablation of TBK1 expression in KRAS mutant lung cancers leads to compensatory activation of a panel of receptor tyrosine kinases including EGFR and MET [14]. One limitation of phosphoproteomic approaches is the requirement of large amounts of protein lysates (usually ~30–50 mg) and/or peptide fractionation (usually 12 fractions per sample), which restricts the number of samples or conditions to be analyzed in a practical and reasonably economical mass spectrometry experiments. Finally, important information on adaptive responses driven by other ATP-binding enzymes could be missed by focusing solely on phosphoproteomics.
We hypothesized that we could employ another approach to study adaptive resistance and kinase rewiring using a commercially available desthiobiotin-ATP probe (ActivX, Thermo Scientific), which covalently labels conserved lysine residues in or near the ATP-binding pocket of enzymes, including kinases [15]. Peptides containing the labeled lysine residues are then enriched by streptavidin beads, identified and quantitated by liquid chromatography-tandem mass spectrometry (LC-MS/MS). This approach is an alternative way to overcome the aforementioned disadvantages since it requires relatively small amount of samples (1 mg) and requires no fractionation for LC-MS/MS analysis. It allowed us to test how multiple KRAS mutant lung cancer cell lines differentially respond to MEK inhibition and reveal heterogeneous ATP-binding proteome responses from each individual cell line.
Here, we profiled ATP-binding proteome responses to two clinical MEK inhibitors, AZD6244 and MEK162, in the context of KRAS mutant lung cancer. KRAS mutations occur in nearly 30% of non-small cell lung cancers (NSCLC), yet therapeutic targets for these cancers have not been realized. MAPK signaling has been known to be essential for KRAS-induced lung tumorigenesis [16], and pharmacological inhibition of this pathway (e.g., MEK inhibitor) has been attempted to treat KRAS-driven lung cancers. However, significant clinical responses are still lacking, in part due to the cancer cells’ ability to re-activate ERK via feedback activation of RAF [5,6,17,18]. Recent studies indicated that mutational status of tumor suppressors, p53 or LKB1, in KRAS mutant lung cancer could modulate drug responses to MEK inhibitor AZD6244 [19] and immune checkpoint inhibitors [20]. This raises the possibility that heterogeneous adaptive responses could exist in KRAS mutant lung cancer depending on the status of co-mutated tumor suppressors, further complicating the development of a rational co-targeting strategy. For this study, we employed multiple KRAS mutant lung cancer cell lines harboring diverse p53 and LKB1 co-mutations and differential histology (adenocarcinoma and squamous cell carcinoma) to address heterogeneous adaptive responses. Using these two MEK inhibitors allows for filtering and focus on “on target” effects and not just idiosyncratic drug targets.

Cells were maintained in RPMI 1640 medium supplemented with 10% FBS. Cells were confirmed to be free of mycoplasma using PlasmoTest (Invivogen, San Diego, CA, USA). AZD6244 and MEK162 were purchased from ChemiTek (Indianapolis, IN, USA). Drugs were reconstituted with DMSO at 50 mM concentration, and aliquots were stored at −80 °C.

Cells at 80% confluence were treated with DMSO (vehicle control) or 1 µM MEK inhibitors (AZD6244 or MEK162) for 24 h; cell pellets were then harvested in ice-cold PBS and stored at −80 °C until probe labeling. Cell lysates were prepared and labeled according to the manufacturer’s recommendations for the Pierce Kinase Enrichment Kits and ActivX Probes (Thermo Scientific, Rockford, IL, USA)). Briefly, cell pellets were re-suspended in 600 µL of Pierce IP lysis buffer and sonicated. The lysates were cleared by centrifugation at 16,000 g for 10 min at 4 °C and desalted by Zeba Spin Desalting Columns (Thermo Scientific, Rockford, IL, USA). The concentration of protein was measured using a Bradford assay, and a total of 1 mg was used for ATP probe labeling. MnCl2 was added to the lysate to a final concentration of 20 mM for 10 min, and then the desthiobiotin-ATP probe was added at a final concentration of 5 mM for 15 min. All reactions were performed at room temperature.

The probe-labeled lysates were denatured in 5 M urea and 5 mM DDT at 65 °C for 30 min and then reduced in 40 mM iodoacetamide at room temperature for 30 min. The lysates were desalted by Zeba Spin Desalting Columns and then digested with 20 μg/mL of trypsin for 2 h at 37 °C. Desthiobiotinylated peptides were captured by 50 μL slurry of high-capacity streptavidin beads for 1 h. The beads were washed with lysis buffer, PBS buffer, and LC-MS grade water in sequence with four washes for each buffer, and then the peptides were eluted by 50% acetonitrile in 0.1% formic acid (TFA) water. The peptides were lyophilized in a vacuum concentrator and re-suspended in 20 μL of injection buffer containing 2% acetonitrile and 0.1% TFA. The LC-MS/MS analysis was performed as previously described [45].

The peptides identified in the mass spectrometry data were analyzed and quantified using MaxQuant Version 1.2.2.5 (http://www.maxquant.org) [21]. For the search parameters, desthiobiotin-ATP labeling was selected, enzyme specificity was set to fully tryptic cleavage, allowing a 10 ppm mass error in the main search, a maximum number of three modifications per peptide, and four maximum missed cleavages. Fragment ion tolerance was set to 0.6 Da. Protein and peptide false discovery rates were set to 0.1 and 0.05, respectively, and the minimum peptide length was set to six amino acids. MS/MS data were searched against the UniProt human database combined with common contaminants and concatenated with the reversed versions of all sequences using the Andromeda search engine integrated into MaxQuant. The protein kinases were annotated using GeneGO (Boston, MA, USA) and intensity of each peptide corresponding to protein kinases were used to calculate the inhibition of each drug on the relevant peptide compared with DMSO control group.
Peptide site intensities were extracted from MaxQuant output and input into the Libaffy software package [46]. Libaffy features access to iterative rank-order normalization (IRON), which we have previously used in proteomics applications [47,48]. Peptide site intensities were normalized using IRON before being input into R/RStudio with corresponding metadata [49,50]. Peptides were filtered to remove posterior error probability >0.1, reverse sequences, non-human peptides, and for peptides that were identified but had no corresponding intensities. Intensities were then log2-transformed. Concordance of log2 ratios between control and treatment pairs was measured using Pearson’s correlation (herein referred to as R). GeneGO MetaCore was used to annotate individual proteins from the identified protein groups [51] and used for pathway searches on all proteins in identified protein groups. A protein group was included in the pathway search if there was at least one standard deviation change in the log2 ratios of both treatments. Inconsistent log2 ratios (i.e., the log2 ratio indicates an increase from AZD6244 but a decrease from MEK162) were not included in the pathway analysis.

Our results demonstrate the utility of the desthiobiotin-ATP probe coupled with LC-MS/MS in assessing adaptive kinome/ATP-binding proteome responses to cancer drugs. This approach could allow mass spectrometry analysis of multiple samples or conditions (e.g., time points) since it does not require a large amount of total protein from each sample and peptide fractionation is unnecessary prior to LC-MS/MS analysis; this approach could be an alternative to kinase inhibitor bead-based kinome profiling and phosphoproteomics. These approaches are complementary and could be combined to identify novel adaptive resistance mechanisms. 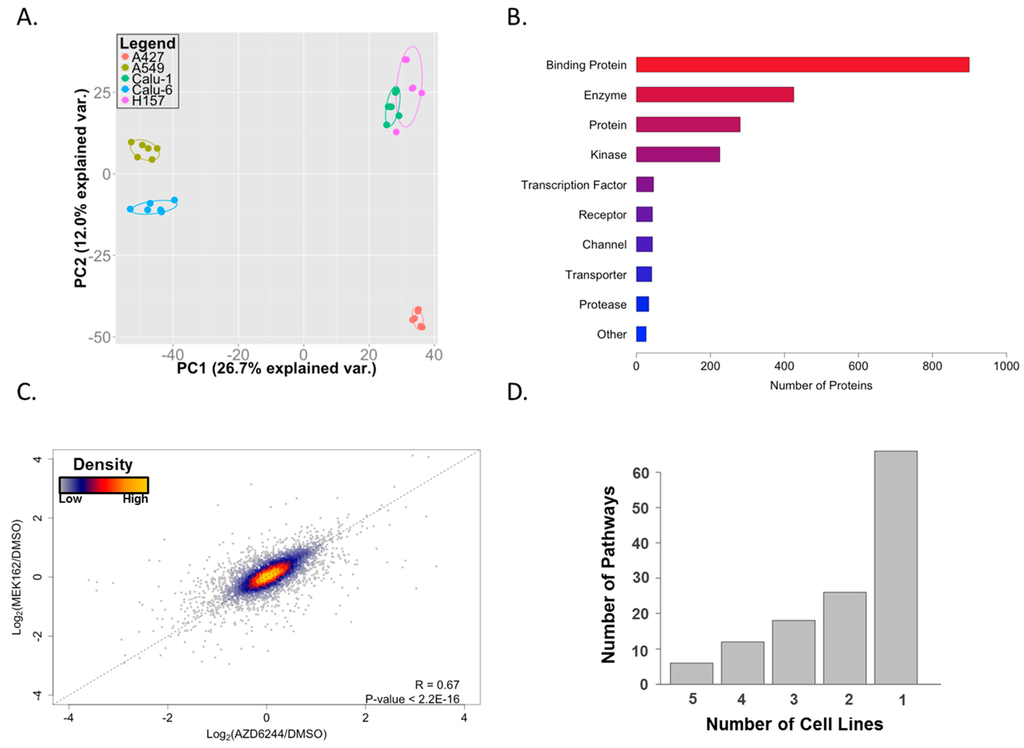 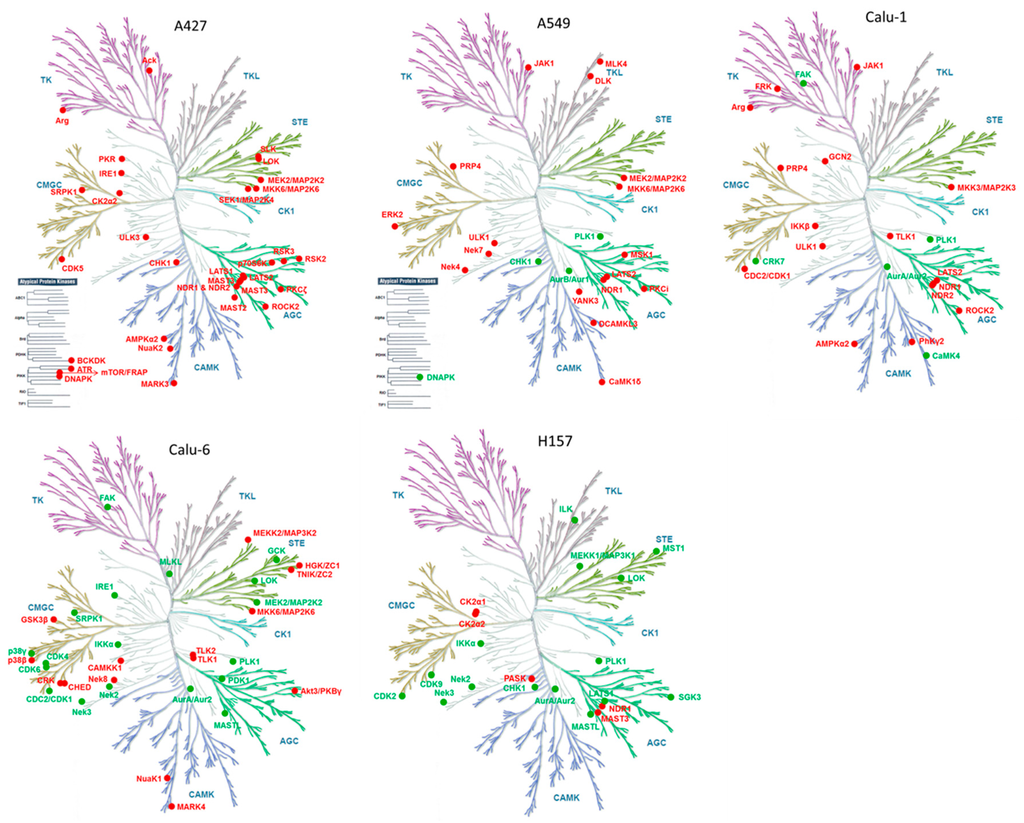