Democracy and Education through the Eyes of Kuwaiti Politicians: A Phenomenological Study
Previous Article in Special Issue

Ecological Citizenship Education and the Consumption of Animal Subjectivity

Refocusing Environmental Education in the Early Years: A Brief Introduction to a Pedagogy for Connection

2. A Pedagogy for Connection

The first draft of a pedagogy for connection that will be presented below is partly based on Lumber et al. [30]. They undertook three studies, grounded on the biophilia hypothesis [31] to identify the pathways through which nature connectedness is achieved. This is further enhanced by literature from developmental psychology, and further evidence from the fields of ecopsychology. Lumber et al. [30] identified the following pathways to nature connection: contact, emotion, meaning, compassion, and beauty. Figure 1 outlines the four main elements and their interrelation.
Based on these elements, the following foundational guidelines for a pedagogy for connection can be articulated.

Having regular access to natural spaces, both wild and managed, should underpin all early childhood education [32]. This is especially true for any EE programmes that focus on connecting with nature, thus remaining true to the original aims of early years’ EE as an education in and about the environment [5]. Contact with natural environments has been identified as a pathway to connecting with nature [30]. Physical and adventurous activities in nature have also been found to promote nature connection [33]. For this reason, regular and sustained contact with natural environments should be central to an EE pedagogy for connection. This feature is already in place in many early childhood EE programmes, as well as some mainstream early childhood pedagogical approaches in numerous Western countries, and will not be developed any further in this article. As shown in Figure 1, contact, although a separate pathway to connection, is seen as a constant and a prerequisite for developing the other three aspects. These three specific aspects of connection—namely engaging with nature’s beauty, developing compassion towards non-human species, and the practice of mindfulness—will be explored further below.

The aesthetic appeal of nature plays an important role in promoting a connection with the natural world [30,34,35]. Being able to notice and engage with beauty in the environment, should, therefore, be a focus of a pedagogy for connection. This appreciation for natural beauty may take many forms, from simply noticing and noting (see here the links with mindfulness below), to capturing nature’s beauty in various artistic forms. An easy way to incorporate such a practice in an early years’ programme would be to spend some time each day noticing three beautiful things in the nearby natural environment, and discussing them with a practitioner. Such an activity has been used as an intervention that showed marked changes in nature connectedness in adults [36] Finally, engaging with nature’s beauty through art has also been found to enhance nature connectedness in children in an empirical study [37], further supporting the argument made in this section.

2.3. Developing Compassion for the Non-Human

Compassion is a complex mental state that begins to develop in childhood and continues to develop throughout the lifespan [38]. The following key elements of compassion have been identified in the past: “(1) Recognizing suffering; (2) Understanding the universality of suffering in human experience; (3) Feeling empathy for the person suffering and connecting with the distress (emotional resonance); (4) Tolerating uncomfortable feelings aroused in response to the suffering person (e.g., distress, anger, fear) so remaining open to and accepting of the person suffering; and (5) Motivation to act/acting to alleviate suffering” [39] (p. 19).
As is clear, the definition above focuses on the human element, but the author proposes that there is no reason why this definition cannot be used as a framework for nurturing compassion towards non-human nature. Past research has indeed linked empathy towards humans and empathy towards animals [40]. There are many ways that compassion can be nurtured in early childhood. Several that have been supported by the literature include direct contact with, and care, for non-human animals [41], encouraging quiet observation of animals in their natural environment [42], encouraging perspective taking, which is the first step towards developing empathy [43] and, finally, anthropomorphising nature [44,45].
Anthropomorphism is the process of attributing human qualities to non-human entities (both living, non-living, and abstract). This process of anthropomorphising nature has been found, in several experimental studies, to promote nature connectedness and protective feelings towards the natural world, fostering conservation behaviours [46]. Although these studies have limitations in that they sampled undergraduate students, further research on young children could shed more light on this association. However, we can hypothesise that the process of anthropomorphising may facilitate perspective taking and, therefore, empathy, the third element of compassion as per the definition above [39]. Finally, it may enhance motivation to act in a compassionate way, the fifth element of compassion [39].

There is a growing body of evidence that explores the associations between mindfulness and nature connection [47,48,49], and significant links have been found between mindfully engaging with nature and nature connectedness [48]. Moreover, earlier research has linked mindfulness with sustainable behaviours [9,47], with the proposed mechanism being that mindfulness promotes better self-world connection and awareness of actions, leading away from automaticity and resulting in a greater ability to regulate one’s behaviour [50,51].
Although there is no evidence for mindfulness in nature interventions in preschoolers, there are several studies in adults that demonstrate links between mindfulness and connection. A recent study of 115 undergraduates reports that engaging with mindfulness, even outside of a natural setting, can increase both social and nature connectedness [52]. Moreover, learning mindfully, which is characterised by openness in thinking and perspective taking amongst other features, was associated with an increase in nature connectedness, both in affective and cognitive terms [48].
There is a dearth of mindfulness programme evaluations in the preschool age range, and certainly none to date have looked at nature connection or mindfulness within a natural environment. However, in a study conducted on preschool children in the United States, researchers observed that a mindfulness-based 12-week-long kindness curriculum significantly increased pro-social behaviours and emotional regulation [53]. These two skills are certainly linked with nurturing compassion, as was outlined above. Finally, engaging with nature mindfully could have the desired effect in providing the skills to appreciate nature’s beauty more deeply [54]. This further links to the second point in the framework.

This short article aimed to use existing evidence from the literature to outline a framework for early childhood EE that places connection to nature at its core and has environmental protection as its ultimate goal. Central to the proposed framework—besides regular contact with nature, which is already a common feature of early childhood education practice in many countries—are the elements of engaging with nature’s beauty, cultivating compassion towards non-human nature, and mindfulness. These four elements, as outlined above, have several areas of intersection between them.
Although the framework is primarily constructed upon current empirical research, there are, inevitably, several limitations. The most notable limitation stems from the fact that a substantial amount of the evidence is largely taken from studies with adult participants, most commonly students. This may affect their generalisability to children in their early years. Moreover, some studies looking at childhood experiences are retrospective in design, again, with adult participants. This also presents methodological limitations.
Future research in this area should focus on two axes. One would be the development and validation of a measuring instrument for nature connectedness that can be used with children in the early years. The second axis should focus on measuring the effect of the practices outlined above on children’s relationship with nature, compassion towards non-human nature, and pro-environmental beliefs and actions. Such studies would ideally be longitudinal in design to capture the effects of such early childhood EE programmes that ultimately focus on sustainability behaviours.

A.B. is the sole author of this article. 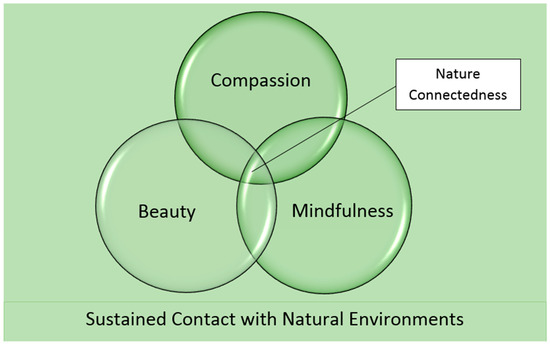