With Socrates on Your Heels and Descartes in Your Hand: On the Notion of Conflict in John Dewey’s Democracy and Education
Previous Article in Journal

A Cross-National Study of Implicit Theories of a Creative Person

Giftedness is an increasingly important research topic in educational sciences and mathematics education in particular. In this paper, we contribute to further theorizing mathematical giftedness through illustrating how networking processes can be conducted and illustrating their potential benefits. The paper focuses on two theories: Renzulli’s domain-general theory on giftedness as an interplay of creativity, above-average ability, and task commitment; and Krutetskii’s mathematics-specific theory on gifted students’ abilities. In a “proof of concept”, we illustrate how the abilities offered in Krutetskii’s theory can be mapped to the three traits described by Renzulli. This is realized through a mapping process in which two raters independently mapped the abilities offered by Krutetskii to Renzulli’s traits. The results of this mapping give first insights into (a) possible mappings of Krutetskii’s abilities to Renzulli’s traits and, thus, (b) a possible domain-specific specification of Renzulli’s theory. This mapping hints at interesting potential phenomena: in Krutetskii’s theory, above-average ability appears to be the trait that predominantly is addressed, whereas creativity and especially task-commitment seem less represented. Our mapping demonstrates what a mathematics-specific specification of Renzulli’s theory can look like. Finally, we elaborate on the consequences of our findings, restrictions of our methodology, and on possible future research. View Full-Text
Keywords: giftedness; theories; mathematics education; networking theories; domain-general; domain-specific giftedness; theories; mathematics education; networking theories; domain-general; domain-specific
►▼ Show Figures 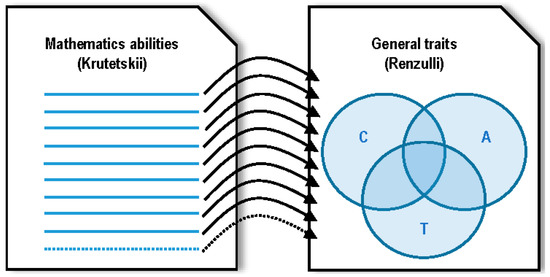