Fostering Creativity in the Classroom for High Ability Students: Context Does Matter

A Cross-National Study of Implicit Theories of a Creative Person

Implicit theories can influence learning behavior, the approaches individuals take to learning and performance situations, and the learning goals individuals set, as well as, indirectly, their accomplishments, intelligence, and creativity. For this cross-cultural study, Kenyan and German students were asked to draw a creative person and rate it on a number of attributes. The data indicated considerable differences among the implicit theories according to students’ gender and nationality. Kenyan girls, in particular, frequently ascribed a gender to their prototypical creative person that differed from their own, whereas the gender of the prototypical creative people drawn by German students was more equally spread. The data offer evidence that implicit theories of a creative person are multifaceted. Kenyan students value diligence as an important attribute of a creative person. In addition, social variables were seen as important, followed by talents in languages and mathematics. By contrast, German students valued imagination and talent in artistic areas, followed by diligence and social components. Their lowest rated attributes for creativity were talents in the domains of languages, mathematics and technical areas. Future studies should further examine the influence of implicit theories on the learning behavior of gifted students. View Full-Text
Keywords: creativity; implicit theory of creativity; cross-cultural study; stereotypes creativity; implicit theory of creativity; cross-cultural study; stereotypes
►▼ Show Figures 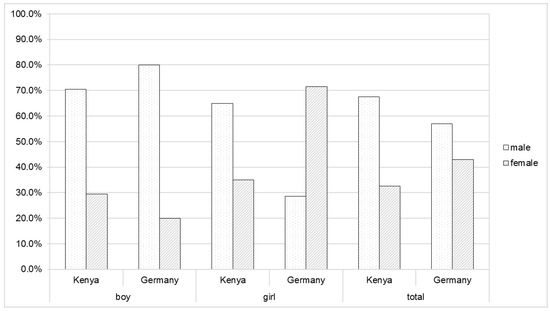