With increasingly stringent environmental regulations, desulfurization for gasoline oil production has become an important issue. Nowadays, desulfurization technologies have become an integral part of environmental catalysis studies. It is also important for processing of fuel for fuel-cells, which has a strict requirement for sulfur content for internal combustion engines. In this study, we focused on the preparation and characterization of magnesium hydroxide/aluminum supported NiO, ZnO, ZrO2, NiO-ZnO, NiO-ZrO2, adsorbents for the adsorptive desulfurization of liquid fuels. These hydrotalcite adsorbents were prepared by co-precipitation method and used for adsorption of thiophene (in n-pentane, as model fuel) and dibenzothiophene at ambient temperature and pressure. The physicochemical behaviors of the fresh adsorbents such as structure, composition, and bonding modes were determined using X-ray diffraction (XRD), Raman spectroscopy, Fourier-transform infrared spectroscopy (FTIR), energy dispersive X-Ray analysis (EDAX), scanning electron microscopy (SEM), X-ray photoelectron spectroscopy (XPS) and thermogravimetric analysis (TGA). The sulfur concentration in the mixture (thiophene and n-pentane) was measured by UV-Vis spectrophotometry. The percentages of thiophene removal and the adsorption capacity (mg of sulfur per g of adsorbent) of the five adsorbents were compared. The adsorption performance confirmed that NiO-ZrO2 and NiO-ZnO adsorbents are more efficient in removing thiophene/dibenzothiophene than that of three other adsorbents. The qualitative studies using XPS confirmed the efficient adsorption nature of modified hydrotalcite adsorbents on dibenzothiophene. View Full-Text
Keywords: adsorption; hydrotalcite; thiophene/dibenzothiophene; n-pentane; desulfurization adsorption; hydrotalcite; thiophene/dibenzothiophene; n-pentane; desulfurization
►▼ Show Figures 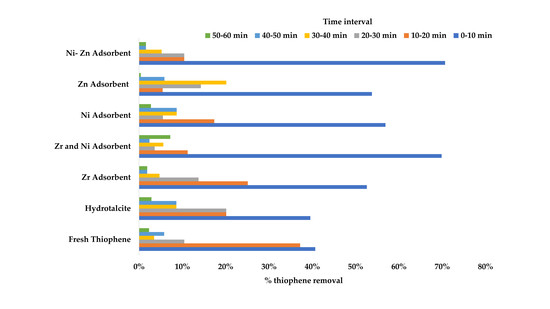