Tracking Australian Hajj Pilgrims’ Health Behavior before, during and after Hajj, and the Effective Use of Preventive Measures in Reducing Hajj-Related Illness: A Cohort Study
Previous Article in Journal

“The Difference between Plan b and ella®? They’re Basically the Same Thing”: Results from a Mystery Client Study

Pharmacy staff can serve an important role educating patients about emergency contraceptive pills (ECP), particularly ulipristal acetate (UPA), which requires a prescription. We conducted a secondary analysis of a previously completed mystery client study, assessing accuracy of information provided by pharmacy staffers to patients inquiring by telephone about filling a prescription for UPA. From the period December 2013 to July 2014, researchers used a mystery client methodology, contacting 198 retail pharmacies in Hawaiʻi. Researchers posed as patients or providers attempting to fill a prescription for UPA. During the course of the call, they asked about differences between UPA and levonorgestrel ECPs. Nearly half of all pharmacy staffers were unfamiliar with UPA. The majority of responses describing differences between the medications were incorrect or misleading, such as responses implying that UPA is an abortifacient. Lack of familiarity and incorrect information provided by pharmacy staffers may act as additional barriers in patient access to UPA. Health practitioners prescribing UPA should ensure patients receive evidence-based counseling at the time of prescription, while efforts should also be made to improve pharmacy staff familiarity with emergency contraceptive options. View Full-Text
Keywords: ulipristal acetate; emergency contraception; pharmacies; United States; Hawaiʻi ulipristal acetate; emergency contraception; pharmacies; United States; Hawaiʻi
►▼ Show Figures 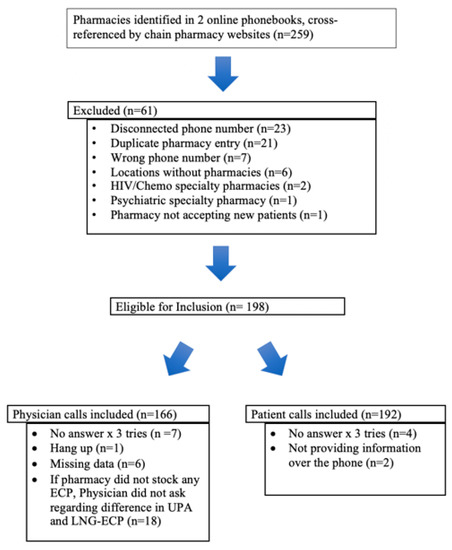