Introduction: As of 2019, people older than 65 years represent 20% of the French population. Despite several guidelines suggesting to avoid potentially inappropriate medication (PIM) use in elderly, the prevalence of their prescription remains high (25%). Furthermore, PIM could lead to preventable adverse drug reactions (ADRs). The main objective of this study was to determine the direct cost of PIM in older persons living in residential care homes for the elderly (nursing homes). A secondary objective was to assess the potential impact of PIM deprescribing on drug-related health care costs. Methods: We undertook a multicenter, retrospective study in 19 care homes for the elderly including 1240 residents. The analysis of prescriptions was carried out according to the European EU(7) PIM list. The cost of each drug was estimated according to the French Medication Insurance database. Furthermore, patient’s comorbidities were studied using Charlson’s comorbidity index. In order to estimate the economic impact of PIM, we used the list of alternative appropriate drugs suggested by EU(7) PIM list and French National Health Authority. An incremental cost per patient was calculated by the difference in costs between PIMs and alternative drugs. Results: A total of 7768 lines of drug prescriptions were analyzed. The mean age was 87.6 ± 7.6 years. About 70% (n = 872) of residents received more than five drugs. We identified 959 residents (77.3%) with at least one PIM. The mean cost of PIM was 0.58 euros versus 0.48 euros for alternatives. PIM substitution by alternatives led to save 12 centimes/resident/day. The mean cost of prescription with PIM was 2.8 euros per resident per day (28% of the overall cost of prescription). According to these results, more than 25 million euros can be overall saved for aged persons living in nursing homes for the older people in France per year. Conclusion: The prevalence of PIMs among the elderly in nursing homes is high and leads to a significant cost. Deprescribing of these medications could decrease both drug misuse and cost of drug prescription. Further research is needed to estimate the overall cost of PIM exposure outcomes, taking into account the ADRs leading to hospitalization. View Full-Text
Keywords: potentially inappropriate medication; nursing homes; deprescribing potentially inappropriate medication; nursing homes; deprescribing
►▼ Show Figures 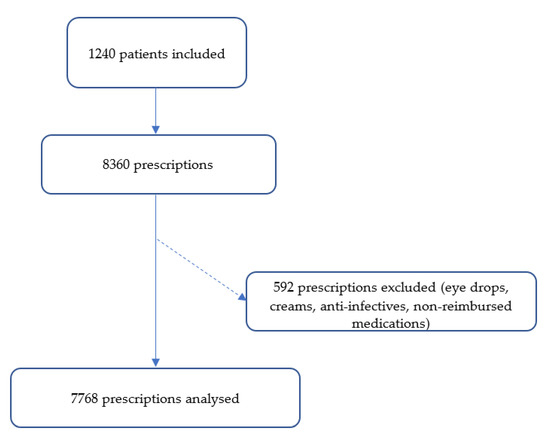