Health Workers’ Perceptions and Expectations of the Role of the Pharmacist in Emergency Units: A Qualitative Study in Kupang, Indonesia
Previous Article in Journal

Current and Potential Roles in Sports Pharmacy: A Systematic Review

Diabetes Screening Through Community Pharmacies in England: A Cost-Effectiveness Study

Community pharmacies are commonly used to screen for patients with diabetes. The aim of this paper is to estimate the cost per test and cost per appropriately referred patient from a pharmacy perspective using a one-year decision tree model. One-way sensitivity analysis was performed to estimate the effect of geographical location and patient self-referral rate. Data was used from 164 patients screened and located in an area with average social deprivation and largely white European inhabitants and 172 patients in an area with higher social deprivation (lower than average ability to access society’s resources) and a mixed ethnicity population in England. The diabetes screening consisted of initial risk assessment via questionnaire followed by HbA1c test for those identified as high risk. The cost per person screened was estimated as £28.65. The cost per appropriately referred patient with type 2 diabetes was estimated to range from £7638 to £11,297 in deprived mixed ethnicity and non-deprived areas respectively. This increased to £12,730 and £18,828, respectively, if only 60% of patients referred chose to inform their general practitioner (GP). The cost per test and identification rates through community pharmacies was similar to that reported through medical practices. Locating services in areas of suspected greater diabetes prevalence and increasing the proportion of patients who follow pharmacist advice to attend their medical practice improves cost-effectiveness. View Full-Text
Keywords: community pharmacy; screening; type II diabetes; cost-effectiveness community pharmacy; screening; type II diabetes; cost-effectiveness
►▼ Show Figures 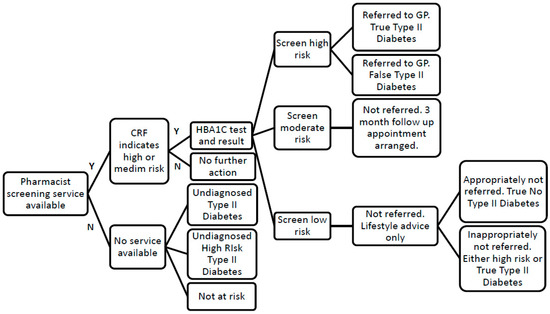