Background: The increasing burden of chronic (medical) conditions (CCs) is a major issue for healthcare systems across the world. We aimed to examine the changes in the rate of medication dispensation for multiple CCs among Australians aged ≥65 years. Methods: A repeated cross-sectional study was performed using the 2013–2016 Pharmaceutical Benefits Scheme (PBS) data on reimbursed prescriptions for a 10% random sample of the Australian population. Twenty-two CCs were identified via the RxRisk-V tool. The yearly changes in the proportion of older adults dispensed medications for ≥2 CCs were determined through Poisson regression modelling using 2013 as the reference year. The occurrence of CC dyads and triads for which medications were dispensed within a 180-day window were characterised, and the observed and expected rate of medication dispensation for each CC dyad or triad were calculated to identify the top 15 combinations. Results: The proportion of older adults dispensed medications for ≥2 CCs remained stable from 2013 to 2016, at >79% in each year. The proportion who were dispensed medications for multiple CCs increased with age. No gender differences in the dispensation of medications for multiple CCs were observed. Over 60% had medications dispensed for ≥3 CCs. The most frequent CC dyad and triad for which medications were dispensed were dyslipidaemia + hypertension (38.6%) and dyslipidaemia + gastroesophageal reflux disease + hypertension (18.7%), respectively. For the majority of CC dyads and all triads examined, the observed rate of medication dispensation exceeded that expected by chance. Conclusions: A high proportion of older Australians are dispensed medications for multiple CCs, suggestive of multimorbidity. The results reiterate the need for increased research into understanding the causal mechanisms of multimorbidity to inform the design of cost-effective interventions. View Full-Text
Keywords: multimorbidity; older adults; disease clusters; comorbidity; medications; Australia multimorbidity; older adults; disease clusters; comorbidity; medications; Australia
►▼ Show Figures 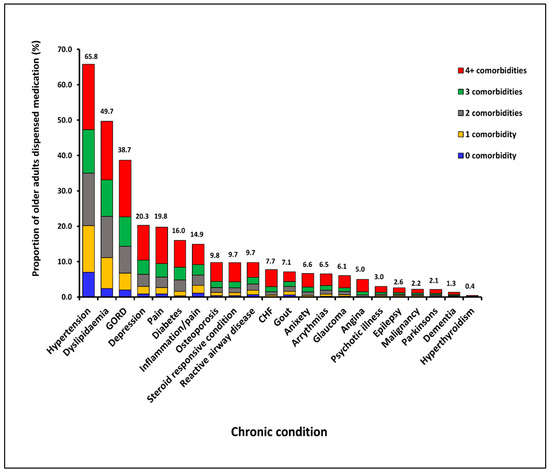