Patient Safety and Pro Re Nata Prescription and Administration: A Systematic Review
Next Article in Special Issue

Medication waste can occur in all stages of the pharmaceutical supply chain. For instance, physicians may prescribe unnecessarily large quantities (prescribing stage). During the dispensing stage, pharmacists dispense larger quantities as manufacturers’ package sizes may exceed the amount required for treatment. Once medication has been supplied to the patient, early treatment changes, for example, due to some side effects or unsatisfactorily efficacy, can lead to an excessive amount of unused medication at home. Moreover, low adherence of patients to treatment regimens can contribute to medication waste as well. Finally, medications that are left unused and of good quality, are generally destroyed if returned to the pharmacy [1,2,3,4,5].
There is increased awareness of the financial impact of medication waste [6,7,8,9]. Health care budgets are limited and unused medications can be considered a waste of resources. It is important that patients dispose of these properly, for instance, by returning these to pharmacies or chemical waste depots. However, patients sometimes incorrectly dispose of unused medications through household garbage, the toilet, or sink, with the risk of polluting the environment [10]. Active pharmaceutical ingredients have been detected in surface, ground, and drinking water [11,12] that may have detrimental effects on aquatic species and ecosystems [13,14]. Efforts to reduce medication waste and the undesirable economic and environmental burden are, therefore, warranted.
Pharmacists are key players in the pharmaceutical supply chain and are in a position to contribute to the reduction of medication waste [15]. One can presume that individual pharmacists have already initiated various strategies to reduce this waste. However, information about activities that are implemented in practice to reduce waste is limited. The availability of such information could facilitate an exchange of knowledge between pharmacists on how to reduce medication waste and could promote the implementation of such activities in daily practice. Therefore, the aim of this study was to identify activities that individual pharmacists have currently undertaken in community and hospital pharmacies in developed countries to reduce medication waste. Moreover, this study aimed to assess the extent to which these activities are implemented, the importance of the activities for reducing waste, and the feasibility for broadly implementing these activities in daily practice.

This survey consisted of two phases: an exploratory phase of which the results were used for the subsequent assessment phase. The study was conducted between July 2014 and October 2016. The first phase aimed to identify activities currently undertaken by individual pharmacists and the second phase aimed to assess the extent to which these activities are implemented and their importance and feasibility (see Figure 1 for overview).

All data were analysed anonymously. Under Dutch law, no approval from an Ethical Review Board was required as only health care professionals were involved.

Pharmacists working in a community, hospital or academic setting located in a country with a ranking of ‘very high‘ on the human development index [16] were eligible for participation. Pharmacists were approached through (inter)national organizations of pharmacists or through the personal network of the research group. Pharmacists received an email invitation explaining the purpose of the study that included a link to the questionnaire. Non-responders received two reminders, the first reminder was sent two weeks after the initial invitation and the second two weeks thereafter. Countries were only included in the analysis if two pharmacists from that country completely filled in the questionnaire.

Activities that individual pharmacists have implemented to reduce medication waste were explored by an open-ended questionnaire that was created in an online survey tool. The questionnaire was developed by the research group and pre-tested in terms of interpretation by a pharmacist who was not involved in the study. The questionnaire consisted of three sections (see Appendix A): the prescribing, the dispensing and the leftover stage. Each section consisted of several questions that focused on activities implemented to reduce medication waste. As the community and hospital setting may differ, hospital pharmacists were asked two additional questions regarding activities implemented during the (preparation prior to) administration of medications and activities implemented at the hospitals’ wards. Pharmacists’ country of origin and work setting (community pharmacy/hospital pharmacy/academic) were recorded as well.

Data from the questionnaires were exported to Microsoft Excel version 2010 (Microsoft, Albuquerque, NM, USA) and analysed using thematic content analysis [17]. Pharmacists’ answers were coded by the first researcher and reviewed by the second researcher [18]. Any disagreements between the two researchers were discussed until consensus was reached. Hereafter, both researchers independently categorized the activities into the three previous defined stages according to their content which they subsequently discussed until both agreed.

A questionnaire was constructed based on the results of the first phase. This questionnaire was distributed among pharmacists participating in the 45th European Symposium on Clinical Pharmacy that was held in Oslo, Norway, in October 2016. Only questionnaires completed by pharmacists working in a country, as defined in phase one, were included in the analysis.

Questions were formulated for all activities that were identified during the first phase of the study and divided into the predefined stages (Appendix B). The questionnaire was also pre-tested by a pharmacist not involved in the research study. For each activity, pharmacists were asked to indicate whether the activity was implemented in their country (yes/no), to rank the importance of the activity to reduce waste and the feasibility to implement in practice. Answers were measured on a scale with a range from one, denoting the activity as not important or feasible, to five, very important or feasible. In addition, pharmacists were able to add other activities if these were not included. Their country of origin and work setting (community pharmacy/hospital pharmacy/academic/other) were recorded as well.

Data from the questionnaires were imported in Microsoft Excel and descriptively analysed (frequencies and percentages). To equally weigh the frequency scores, more than 50% of the pharmacists within a country should have reported implementing the activity, because activities taken by fewer than half of the pharmacists within a country were assumed to be taken at random and therefore not counted. The importance and feasibility ranking scales were assessed as medians with interquartile ranges. First, the median ranking for each activity within each country was determined. Subsequently, the median ranking for all activities were calculated and averaged per stage. All analyses were performed in STATA version 13 (StataCorp, College Station, TX, USA) and Microsoft Excel.

Fifty-three pharmacists from 19 developed countries were included in the first phase of the study (Appendix C). The activities currently undertaken by individual pharmacists to reduce medication waste were categorized into the prescribing, dispensing and leftover stage. During the analysis, two subthemes within the dispensing stage were added, i.e., activities related to the pharmacy or to the patient’s medication therapy and storage practices. In total, 14 main activities were identified (Table 1).
Eighty-nine pharmacists from 22 developed countries were included in the second phase (Appendix D). The pharmacists reported no new activities on top of the activities that were identified in phase one. Results of the two phases are presented together per stage hereafter to facilitate a comprehensive presentation.

To reduce medication waste in the prescribing stage, two main activities that were undertaken were identified. Namely, prescribers could tailor the prescribed amount and pharmacists could counsel prescribers on the prescribed amount. Most pharmacists mentioned that prescribers tailor the amount based on medication characteristics (e.g., cost), on patient characteristics (e.g., age) and the expected duration of time until symptoms should resolve. Some pharmacists remarked that they counsel prescribers on how to prevent waste. For instance, by recommending the duration of use for each prescription whenever possible.
Activities in the prescribing stage were reported to be implemented by approximately one-third of the countries (Table 1). On average, these activities were considered important for reducing waste (median ranking 4), and were ranked neutral in terms of the feasibility of their implementation in practice (median ranking 3, Figure 2 and Figure 3).

Activities undertaken by pharmacists to reduce medication waste in the dispensing phase focused mainly on dispensing smaller amounts to the patient, by adjusting the amount of prescribed medications to the treatment duration, dispensing opened medication packages and using dose-dispensing systems. Most pharmacists indicated that the number of days for which medications can be dispensed is limited by law and generally concerns a three-month supply. Some pharmacists mentioned that they are allowed to adjust the amount of medications prescribed without consulting the prescriber. One example of such an activity is when a pharmacist notices that a physician has prescribed more than needed, they inform the patient and reduce the dispensed amount. However, this approach is not achievable for all pharmacists as it was frequently reported that pharmacists are only allowed to dispense complete medication packages, even when the prescribed amount is less. Concerning internal waste management at the pharmacy, pharmacists mentioned that they manage the amount of medications kept in stock. For example, some pharmacies exchange medications that are rarely used or that are close to the expiry date to prevent disposal. In some hospital pharmacies, patients who are treated with parenteral medications are scheduled on the same day in order to pool injection vials.
Stock management was most frequently reported activity implemented to reduce medication waste, in 86.4% of the responding countries. Of these countries, 94.7% indicated that they limit the amount of medications that are kept in stock and 73.7% collaborated with other pharmacies to exchange medications. The other pharmacy-related activities of the dispensing stage were reported to be implemented by approximately half of the countries. The activities were ranked the highest in terms of importance and feasibility. Of all activities, using dose-dispensing systems and stock management ranked highest concerning their importance for reducing waste (median ranking > 4), but lower on feasibility for implementation (median ranking 3 and 4 respectively).

Patient-related activities for reducing waste reported in the dispensing stage aimed at optimizing medication therapy and storage management by the patient. These include storing the majority of patient’s medications at the pharmacy, reviewing the patient’s medications, and starting a dialogue with the patient about the quantity needed. Furthermore, through discussion with the patient, pharmacists try to adjust the dispensed amount to the patient’s actual needs, and to increase their awareness about waste. Some hospital pharmacists reported that patients are allowed to use their own home medications during hospital admission, thereby reducing medication waste.
Sixty-eight percent of the responding countries reported to perform medication reviews. Only 9.1% of the countries stored patients’ medications at the pharmacy and this was considered less feasible (median ranking 2). Overall, patient-related activities in the dispensing stage were considered important for reducing waste (median ranking 4), but scored lower on feasibility for implementation (median ranking 3).

The authors want to thank all pharmacists who participated in this study. Special thanks go out to Aya Al-Rashed who performed the data collection of the exploratory phase.

Appendix A. Questionnaire of Phase One

1.
Which initiatives are taken nationally and in pharmacies to minimize medication waste?

9.
What is done with unused medications that are returned to the pharmacy?

Appendix B. Questionnaire of Phase Two

Appendix C. Number of Pharmacists per Country of Origin and Work Setting that Participated in Phase One

Appendix D. Number of Pharmacists per Country of Origin and Work Setting That Participated in Phase Two. 12 Pharmacists Were Working in Multiple Settings and therefore the Total Sum Exceeds 89 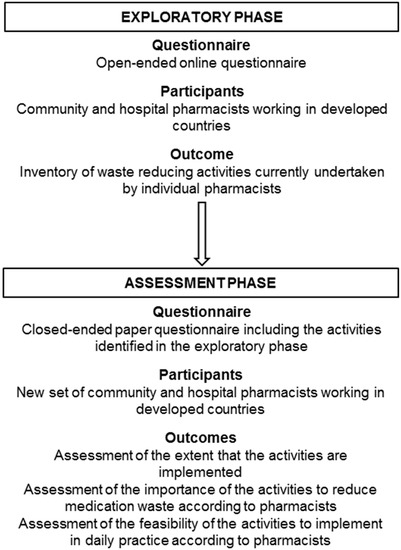 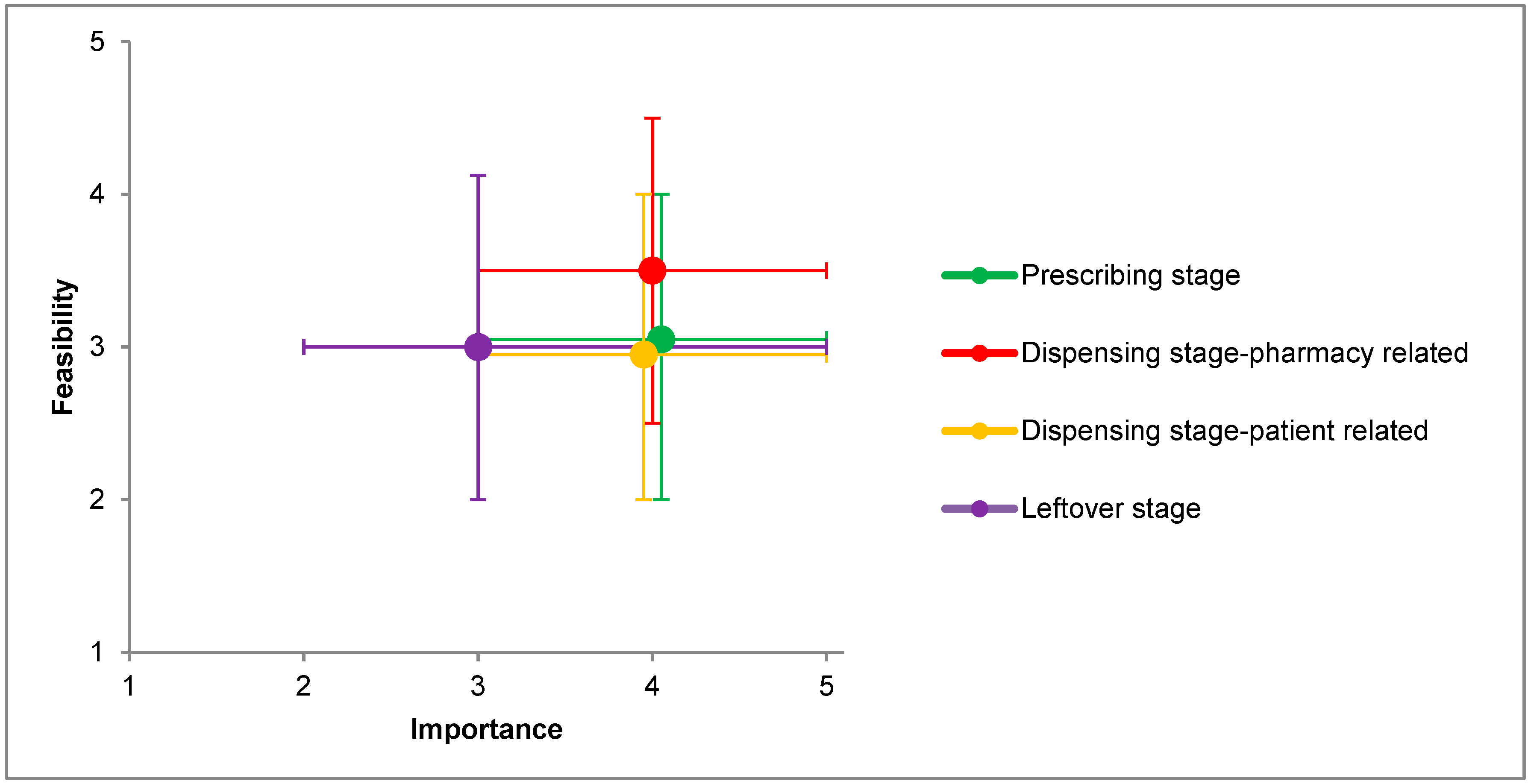