Does Teaching Your Native Language Abroad Increase L1 Attrition of Speech? The Case of Spaniards in the United Kingdom

The present study examines the perceived L1 accent of two groups of native Spaniards in the United Kingdom, Spanish teachers, and non-teachers, alongside monolingual controls in Spain. While the bilingual groups were carefully matched on a range of background variables, the teachers used Spanish significantly more at work where they constantly need to co-activate it alongside English. This allowed us to test the relative effect of reduced L1 use and dual language activation in first language attrition directly. To obtain global accentedness ratings, monolingual native Spanish listeners living in Spain participated in an online perception experiment in which they rated short speech samples extracted from a picture-based narrative produced by each speaker in terms of their perceived nativeness, and indicated which features they associated with non-nativeness. The results revealed significantly greater foreign-accent ratings for teachers than non-teachers and monolinguals, but no difference between the latter two. Non-native speech was associated with a range of segmental and suprasegmental features. These results suggest that language teachers who teach their L1 in an L2-speaking environment may be particularly prone to L1 attrition since they need to co-activate both their languages in professional settings and are regularly exposed to non-native speech from L2 learners. View Full-Text
Keywords: L1 attrition; speech; foreign accent; accent perception; Spanish; English; bilingual; teacher L1 attrition; speech; foreign accent; accent perception; Spanish; English; bilingual; teacher
►▼ Show Figures 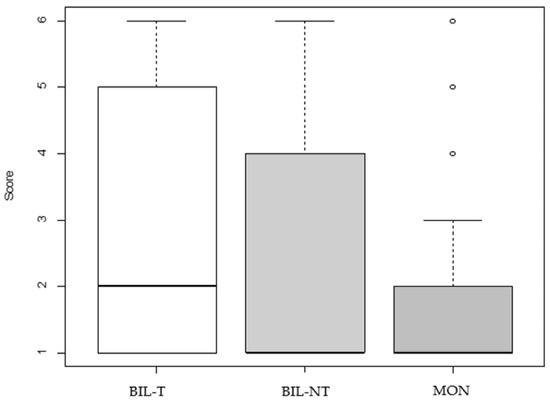 Mayr, R.; Sánchez, D.; Mennen, I. Does Teaching Your Native Language Abroad Increase L1 Attrition of Speech? The Case of Spaniards in the United Kingdom. Languages 2020, 5, 41.


Mayr R, Sánchez D, Mennen I. Does Teaching Your Native Language Abroad Increase L1 Attrition of Speech? The Case of Spaniards in the United Kingdom. Languages. 2020; 5(4):41.