Recent trend in the aeronautic industry is to introduce a novel prognostic solution for critical systems in the attempt to increase vehicle availability, reduce costs, and optimize the maintenance policy. Despite this, there is a general lack of literature about prognostics for hydraulic flight control systems, especially looking at helicopter applications. The present research was focused on a preliminary study for an integrated framework of fault detection and failure prognosis tailored for one of the most common architectures for flight control actuation. Starting from a high-fidelity dynamic model of the system, two different faults were studied and described within a dedicated simulation environment: the opening of a crack in the coils of the centering springs of the actuator and the wear of the inner seals. Both failure modes were analyzed through established models available in the literature and their evolution simulated within the model of the actuator. Hence, an in-depth feature selection process was pursued aimed at the definition of signals suitable for both diagnosis and prognosis. Results were then reported through an accuracy-sensitivity plane and used to define a prognostic routine based on particle filtering techniques. The more significant contribution of the present research was that no additional sensors are needed so that the prognostic system can be potentially implemented for in-service platforms. View Full-Text
Keywords: prognostics; hydraulic flight control; stability and command augmentation system; feature selection; particle filtering prognostics; hydraulic flight control; stability and command augmentation system; feature selection; particle filtering
►▼ Show Figures 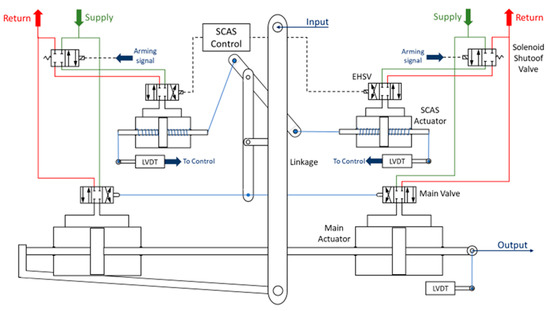