Nanosatellites are increasingly being used in space-related applications to demonstrate and test scientific capability and engineering ingenuity of space-borne instruments and for educational purposes due to their favourable low manufacturing costs, cheaper launch costs, and short development time. The use of CubeSat to demonstrate earth imaging capability has also grown in the last two decades. In 2017, a South African company known as Space Commercial Services launched a low-orbit nanosatellite named nSight-1. The demonstration nanosatellite has three payloads that include a modular designed SCS Gecko imaging payload, FIPEX atmospheric science instrument developed by the University of Dresden and a Radiation mitigation VHDL coding experiment supplied by Nelson Mandela University. The Gecko imager has a swath width of 64 km and captures 30 m spatial resolution images using the red, green, and blue (RGB) spectral bands. The objective of this study was to assess the interpretability of nSight-1 in the spatial dimension using Landsat 8 as a reference and to recommend potential earth observation applications for the mission. A blind image spatial quality evaluator known as Blind/Referenceless Image Spatial Quality Evaluator (BRISQUE) was used to compute the image quality for nSight-1 and Landsat 8 imagery in the spatial domain and the National Imagery Interpretability Rating Scale (NIIRS) method to quantify the interpretability of the images. A visual interpretation was used to propose some potential applications for the nSight1 images. The results indicate that Landsat 8 OLI images had significantly higher image quality scores and NIIRS results compared to nSight-1. Landsat 8 has a mean of 19.299 for the image quality score while nSight-1 achieved a mean of 25.873. Landsat 8 had NIIRS mean of 2.345 while nSight-1 had a mean of 1.622. The superior image quality and image interpretability of Landsat could be attributed for the mature optical design on the Landsat 8 satellite that is aimed for operational purposes. Landsat 8 has a GDS of 30-m compared to 32-m on nSight-1. The image degradation resulting from the lossy compression implemented on nSight-1 from 12-bit to 8-bit also has a negative impact on image visual quality and interpretability. Whereas it is evident that Landsat 8 has the better visual quality and NIIRS scores, the results also showed that nSight-1 are still very good if one considers that the categorical ratings consider that images to be of good to excellent quality and a NIIRS mean of 1.6 indicates that the images are interpretable. Our interpretation of the imagery shows that the data has considerable potential for use in geo-visualization and cartographic land use and land cover mapping applications. The image analysis also showed the capability of the nSight-1 sensor to capture features related to structural geology, geomorphology and topography quite prominently.
Keywords: nanosatellites; remote sensing; image quality; image interpretability; land use and land cover applications nanosatellites; remote sensing; image quality; image interpretability; land use and land cover applications

The nSight-1 images used in this study are comprised of the red, blue, and green spectral bands. With a 64 km swath, nSight-1 images are captured at a ground sampling distance of 32 m [14]. The sensor features a Bayer-pattern filter, which captures colour images in the visible region of the electromagnetic spectrum. Real-time onboard computer processing as shown in Figure 1 includes Bayer pattern demosaicing, RGB colour space conversion, and chroma subsampling and thumbnail downsampling [16]. Further colour optimization is applied to the images. The spectral response for the red, blue, and green bands are shown in Figure 2. Wavelengths longer than 720 nm are not taken due to the NIR-blocking filter onboard the nSight-1 imager.
The compression imaging workflow for nSight-1 is shown below.
The following procedures are done using real-time onboard processing: Bayer pattern demosaicing, RGB colour space conversion, chroma subsampling, and thumbnail downsampling while the JPEG compression process is done on the onboard computer [15]. One of the advantages of nSight-1 nanosatellite is that it uses a tasking image acquisition strategy. This entails that the nanosatellite only captures images over targeted areas that have been pre-programmed and does not have a fixed temporal resolution. Unlike Landsat 8 that mainly operates in systematic acquisition mode, tasking allows frequent revisits over programmed areas of interest.
Landsat 8 images acquired over the study area were used for comparing the image quality score, using the red, blue, and green spectral bands. The Landsat 8 images were selected because nSight-1 and Landsat 8 multispectral bands share the same spatial resolution of 30 m. nSight-1 CubeSat images were acquired from Space Commercial Services and Landsat 8 OLI images from South African National Space Agency. Landsat 8 Operational Land Imager (OLI) and Thermal Infrared Sensor (TIRS) images are received through direct reception at SANSA from NASA and USGS owned Landsat 8 satellite. Landsat 8 OLI images consist of nine VNIR and SWIR spectral bands at 30 m spatial resolution. The Landsat 8 OLI blue, green, and red spectral bands are strategically designated at 0.452–0.512, 0.533–0.590, and 0.636–0.673 micrometres of the electromagnetic spectrum respectively to capture land cover features such as water, vegetation, soil, and geology. Images used in this study are collected over sites in South Africa, USA, Canada, Botswana, Egypt, Bolivia, and Saudi Arabia. The study sites are characterized by diverse land use and land cover types discernible from nSight-1 nanosatellite images.

In this study, we applied the MITRE Image Quality Measure Computer Program© (IQM–v7.3) to automatically compute NIIRS ratings for the images. To establish the NIIRS values for the nSight-1 and reference Landsat 8 images we used the Image Quality Measure (IQM) algorithm. IQM is an objective, quantitative image quality indicator that uses the spatial frequency power spectrum of digital imagery and the modulation transfer function of the human visual system [26]. The power spectrum carries critical spatial quality information inherent in digital images such as sharpness, contrast and detail rendition [40]. IQM is highly correlated with the NIIRS to the extent that IQM valued can easily be converted to NIIRS values using a regression equation. NIIRS is a standard visual quality scale utilized in image interpretation that has been used widely for the detection, recognition and identification of man-made objects discernible from digital satellite imagery and aerial photography. In this study, we used the MITRE Image Quality Measure Computer Program© (IQM–v7.3) to compute the NIIRS values for the images. The mathematical formulae for IQM is shown in Equation (2) below. where:
The program is capable of computing NIIRS for general aerial images, space digital sensors, space oblique digital sensor, and digitized film imagery.

In this study, we use the Blind/Referenceless Image Spatial QUality Evaluator (BRISQUE) to assess the visual-spatial image quality of nSight-1 imagery. The BRISQUE model uses scene statistics of locally normalized luminance coefficients to characterize possible losses of naturalness in the image as a result of distortions [29]. We selected BRISQUE due to its computational simplicity and superior performance over other complex methods. Mittal [29] reported that BRISQUE produced better results compared traditional methods involving full-reference peak signal-to-noise ratio (PSNR) and structural similarity index (SSIM). BRISQUE uses a Natural Scene Statistics model framework of pair-wise products locally normalized luminance values to compute an automatic measure of perceptual quality in the spatial domain without the use of a reference image [29,30]. The algorithm does not use distortions specific features such as blur to calculate image quality losses. The results of the image considered to be highly correlated. BRISQUE is increasingly being used in a variety of satellite image quality assessments. The image quality scores computed by the BRISQUE Model are expressed in a grading scale of 0 to 100 where a score of 0 is indicative of the best quality and 100 is considered the worst. Translating this to the equivalent categorical five-level scales (excellent, good, fair, poor, bad) implies 0 is excellent and 100 is poor. This approach is beneficial since other blind image quality assessment methods are distortion specific and are only able to perform that assessment when there is prior knowledge to the distortion affecting the image such as blur, compression, and noise.

To compare the image quality scores and NIIRS values for nSight-1 and Landsat 8 images we performed a statistical analysis in GraphPad Prism8® software. The Shapiro–Wilk test was first used to test the normal distribution of the visual scores from the blind assessment image quality scores and NIIRS scores while a Student’s t-test was used to compare the score from the two datasets using a significance level of 0.05.

The upsurge in the number low cost nanosatellites with earth imaging capabilities offers new prospects for earth observation. Although most of the nanosatellites have been used as platforms for education, capability demonstration and testing scientific space-borne instruments, the potential for the usage of CubeSat data for practical remote sensing applications are increasingly being realized. In this study, we assessed the image quality of the satellite images captured by the nSight-1 CubeSat and examined the images to consider the potential remote sensing applications for the mission. Results of this study indicated that Landsat 8 OLI images produced significantly higher image quality scores and NIIRS results compared to nSight-1, revealing Landsat 8 has superior image quality and better image interpretation characteristics. Nonetheless, when considered independently, it can be concluded that nSight-1 images are of high quality as shown by an average NIIRS value of 1.6 and the spatial image quality scores that ranged in the good to excellent image quality categories. The quality of nSight-1 imagery in the spatial dimension is attributable to the inherent spatial, spectral, and radiometric resolution of the data.
Our interpretation of the imagery indicates that the data has considerable potential for use in geo-visualization and cartographic land use and land cover mapping applications. The features discernible from nSight-1 imagery are consistent with those described at level 1 and 2 of the National Image Interpretability Rating Scales (NIIRS). We observed that inSight-1 imagery could be used for a range of earth observation application that include urban demarcation, forest patch delineation, mapping of structural geology features, agriculture field boundary extraction, water body mapping, and coastline mapping and assessment, land degradation and soil erosion assessments, drainage morphometric analysis of fluvial systems, wetlands monitoring, maritime ship surveillance, mapping of major roads, general land use, and land cover mapping. The nSight-1 images analyzed in the study depicted strong expressions of geological structures, geomorphological patterns, and surface topography. Imagery from the nSight-1 nanosatellite could also be used for filling data gaps in rapid response applications such as disaster management and other time-sensitive applications. To widen its applications, increase data usage, and improve temporal resolution, we recommend in the future that nSight-1 missions investigate developing a constellation of CubeSats with an increased number strategically placed spectral bands in the visible and near-infrared (VNIR) region. The inclusion of the near-infrared band could be prioritized. We also recommend future missions to focus on radiometric calibration to improve the radiometric quality of the data and potentially get the data to an analysis-ready state. 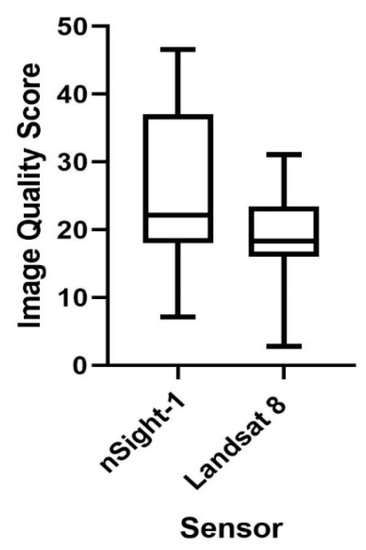 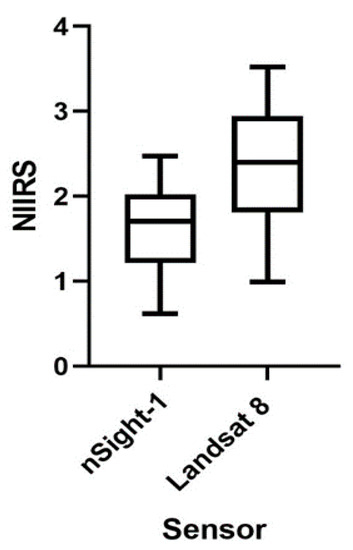