Aircraft wings optimized for cruise conditions provide control devices to ensure aerodynamic performance during takeoff and landing [1]. For safe takeoff and landing, it is important to assess the aerodynamic performance accurately for deploying control devices. Computational fluid dynamics (CFD) technology has made tremendous progress [2,3,4]; it has advantages in that not only can it reduce capital investment and maintenance costs, but it also can acquire physical quantity at any position in a computational domain. However, to realize accurate aerodynamic performance prediction for control devices, CFD is not mature yet; we deepen the perception of knowledge through the American Institute of Aeronautics and Astronautics high-lift prediction workshops [5,6,7]. On the other hand, in the wind tunnel test, we can obtain spatial data through particle image velocimetry (PIV) [8] measurements; we can comprehensively gain surface pressure/temperature through the invention and development of Pressure/Temperature Sensitive Paint (PSP/TSP) [9]. In recent years, it has become possible to procure unsteady data, too [10]. Although there are problems such as wall interference of wind tunnels and the Reynolds number effect, we can earn data without any mathematical modeling, so it remains an indispensable means for aerodynamic performance evaluation.
A typical wind tunnel is a system that installs a large actuator outside a measuring chamber and changes the angle of attack of an entire model. Thus, it is necessary to temporarily suspend the ventilation of the wind tunnel to alter only a part of the wind tunnel model like control devices; we adjust the configuration of it by hand. Then, we should recommence ventilation. Because we can ordinarily measure at most five configurations per day, we cannot obtain a sufficient amount of data during a limited test period, which is abundantly unproductive. Research and development have been implemented to extend on dynamic testing capabilities that Germany and the Netherlands have advanced for many years to solve this dilemma [11,12]. Airbus has proposed the motorization of wind tunnel test models that can be remotely controlled [13]. The Boeing company has similarly earned patents on the measurement technology of wind tunnel tests in the US [14]. In this way, wind tunnel tests are becoming more efficient, but no papers discuss the particulars of the data acquired from these systems; the exactitude of the data and the usefulness of the method are unknown.
This study has two purposes: the efficiency of wind tunnel tests and highly accurate configuration settings. We remotely manipulated an actuator to change model configurations sequentially without resting ventilation to enhance the efficiency of wind tunnel tests. Actuators used in wind tunnel models have recently exhibited sophisticated performance [15], so we extended a system in which a small actuator is installed in a simple 3D rectangular wing model with a flap so that we manage the flap angle remotely. However, an error inevitably arises between an input value and an actual rotating angle from play due to the actuators’ characterization. An error also results from the elastic deformation of wind tunnel models. To minimize these errors is crucial to assure the exactitude of wind tunnel test data. Thus, we fulfilled an automated feedback control of the actuator. We prepared three parameters to utilize for our feedback control and inspect the precision of rotating amounts of flap angles for them. The first parameter is the pulse number of the stepping motors in the actuator; the second is the encoder value of the flap hinge line; the third is the 3D surface coordinates of the wind tunnel test model based on optical measurement. This study adopted the 3D surface coordinates using the optical measurement system [16,17] for the first time to consider the elastic deformation of the model, so we focused on validating its efficacy.
This article is structured as follows. In Section 2, we explain the constructed feedback control system. Section 3 outlines the model and pieces of measurement equipment used in the wind tunnel system. In Section 4, we assess the precision accomplished by the feedback control system using optical measurement. Section 5 concludes this article.

By bringing the actual flap angle closer to the input value as much as possible, we can procure highly accurate aerodynamic data. Thus, this research diverts the optical measurement system that Japan Aerospace Exploration Agency (JAXA) has been studying. Optical measurement is a technique to measure variations in the physical quantity of flow fields and geometrical deformations of wind tunnel test models through optical instruments such as laser and camera. JAXA has been researching the flow field measurement via PIV [18,19] and PSP [17,20] using this system and has recently constructed a hybrid wind tunnel through data assimilation with CFD. We divert a part of the optical measurement system configured to accomplish the purpose of this study and derive actual flap angles from photographed image data of the wind tunnel test model.
Inferring flap angles is based on the principle of triangulation; two cameras measure the 3D coordinates of markers stuck on the model surface. We estimated normal vectors of the coordinate values at each marker position and procured relative flap angles before and after the flap driving. The flow of the derivation is as follows:
denotes the feedback value by optical measurement. Further, the system can make feedback controls using the pulse number of stepping motors and the encoder values as parameters.

We took a commercialized actuator as small as possible and made the wind tunnel test model with a stepping-motor-driven actuator inside it. Since the wing needed thickness suitable to contain the actuator, we chose the NACA0018 airfoil shape. We can alter either both-end or one-end fixed configuration by attaching/detaching the wing tip parts. We used the model with the both-end supported configuration for fixing horizontally in the wind tunnel to perform control performance tests. By contrast, we utilized the one-end supported configuration perpendicularly to the balance in the wind tunnel to measure three components of the aerodynamic force. We designed the model with the dimensions shown in Table 1 according to the size of the wind tunnel test section.
Installed instruments had the following requirement; they need to attain a torque that surmounts the aerodynamic force that the flow of the wind tunnel generates. Even in wind tunnel tests with the maximum flow speed of 50 m/s, we need to stipulate the lower limit of the required torque because we should select an actuator capable of generating sufficient torque against the aerodynamic force.
Figure 2 presents the wind tunnel test model drawn by CAD software and created practically. To satisfy all the aboverequirements, we stored the equipment in the thickest location of the wing and transmitted the torque to the hinge line of the flap using bevel gears and a shaft shown in Figure 3. The details of the installed devices are as follows:

To assess the performance of the constructed system, we evaluated the tracking performance of the actuator by the difference between input target angles and accomplished angles on the flap:
We always fixed the angle of attack of the main wing at 0 degrees; we rotated the flap angle in the order of 0 →→ 0 → 20 → 0 degrees. As shown in Figure 5, we defined the plus/minus of the rotation direction.
We set to be eight angles: , , , , 1, 5, 10, and 20 degrees to verify whether we control accurately regardless of the value of . We performed under five wind speed conditions: 0, 10, 20, 30, 40, and 50 m/s. We defined the converge judgment of this time as follows: where i (1, 2, 3, ⋯) signifies the iteration number of feedback controls. The second condition is a criterion for determining that the stepping motor is running idle.
In this case, we placed in the order of 0 →→→→ 0 → 5 → 10 → 20 → 0 degrees. Figure 6a depicts final errors accomplished by the feedback control by in each flap angle at each flow velocity. Except for a part of the data of 50 m/s (when is 0 deg), converged to
Figure 6a reveals the following two points:
These data do not depend on wind speeds. Even under the 50 m/s condition, the system achieved similar convergence performance except for of 0 degrees. In the case of 0 degrees, since the aerodynamic forces on the upper and lower surfaces of the flap are respectively small, they mutually cancel each other, and the feedback system cannot apply the torque against the aerodynamic force on the flap. Consequently, to lock the flap in the of 0 degrees is difficult, which is a drawback of the feedback control by .
Figure 6b–g shows the convergence histories of for each wind speed. These graphs indicate the following three points:
We needed many numbers of times of control and a control interval of up to s because of the actuator mechanism and deformation of the wind tunnel test model, but we could control the flap even with the upper limit of the wind speed and could procure the flap angle data without any loss.

This study has constructed a remote and feedback control system to adjust the configuration of a part of a wind tunnel test model. The purpose was to improve the efficiency of the wind tunnel test by automatically rotating the flap of the wind tunnel test model without pausing the ventilation and to position precisely by diverting optical measurement technology. We were able to experiment faithfully with the intended configurations because optical measurement can feedback for aerodynamic data from both the play of the actuator mechanism and the deformation of the model. Since sequential aerodynamic data could be procured efficiently by trial experiments presented in Appendix A, the system has expanded the possibility of future wind tunnel tests.

K.C., T.K., H.K., and K.N. conceived and designed the experiments; T.K. and H.K. performed the experiments; K.C. and T.K. analyzed the data; K.C. wrote the paper. All authors have read and agreed to the published version of the manuscript.

This study was conducted under the JAXA student training system (technical acquisition).

Since we constructed the environment that accurately implements remote and feedback controls by optical measurement, we practically applied it to earn three components of the aerodynamic force. We calibrated three sensor components before and after the wind tunnel test. As shown in Figure A1, we fixed the model with one-side support mounted on a three-component force sensor on the bottom of the wind tunnel so that 25% mean aerodynamic chord was the moment center. We attempted experiments under the three conditions in Table A1. This endeavor is a feasibility study of acquiring aerodynamic data; the physical interpretation of the data will be our future work.

Table A1. Experimental conditions for attempting aerodynamic measurement.
Table A1. Experimental conditions for attempting aerodynamic measurement.
Figure A2a presents the gained and ; Figure A2b displays . Since Cases 1 and 2 were system operation confirmation works, we measured and only in Case 3. Figure A2 explicates the state in which the experiments could obtain aerodynamic data sequentially. From the results of Cases 1 and 2, the contrast due to the wind speed is also apparent; the system accomplished high resolution that the gradient changes near degrees in Case 1. It is significant to be able to capture nonlinear aerodynamic change due to an alteration in the flow around the flap.

Next, we plan to perceive the behavior of the data of Case 3 that possesses three components (, , and ) under the condition that the main wing is at the high angle of attack. Figure A2 indicates that phenomena vary between the four regions: (i) , (ii) , (iii) , and (iv) . Visualizing flow fields requires comprehending specific physics, but we infer phenomena as follows:

In this way, the system can sequentially capture variations in phenomena in one ventilation run; we can precisely distinguish changing physical circumstances.
In this endeavor, rotated from to 45 degrees, but by performing the reverse rotation, we can address a hysteresis of aerodynamic force. In addition to facilitating the capabilities of wind tunnel tests, we would perceive fluid physics more deeply hereafter. 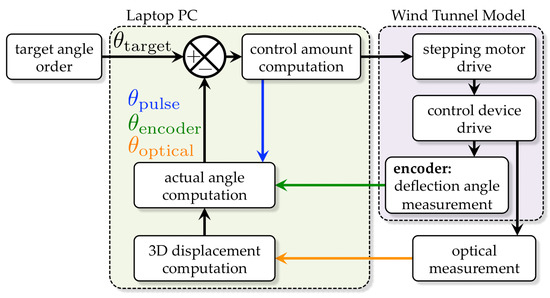 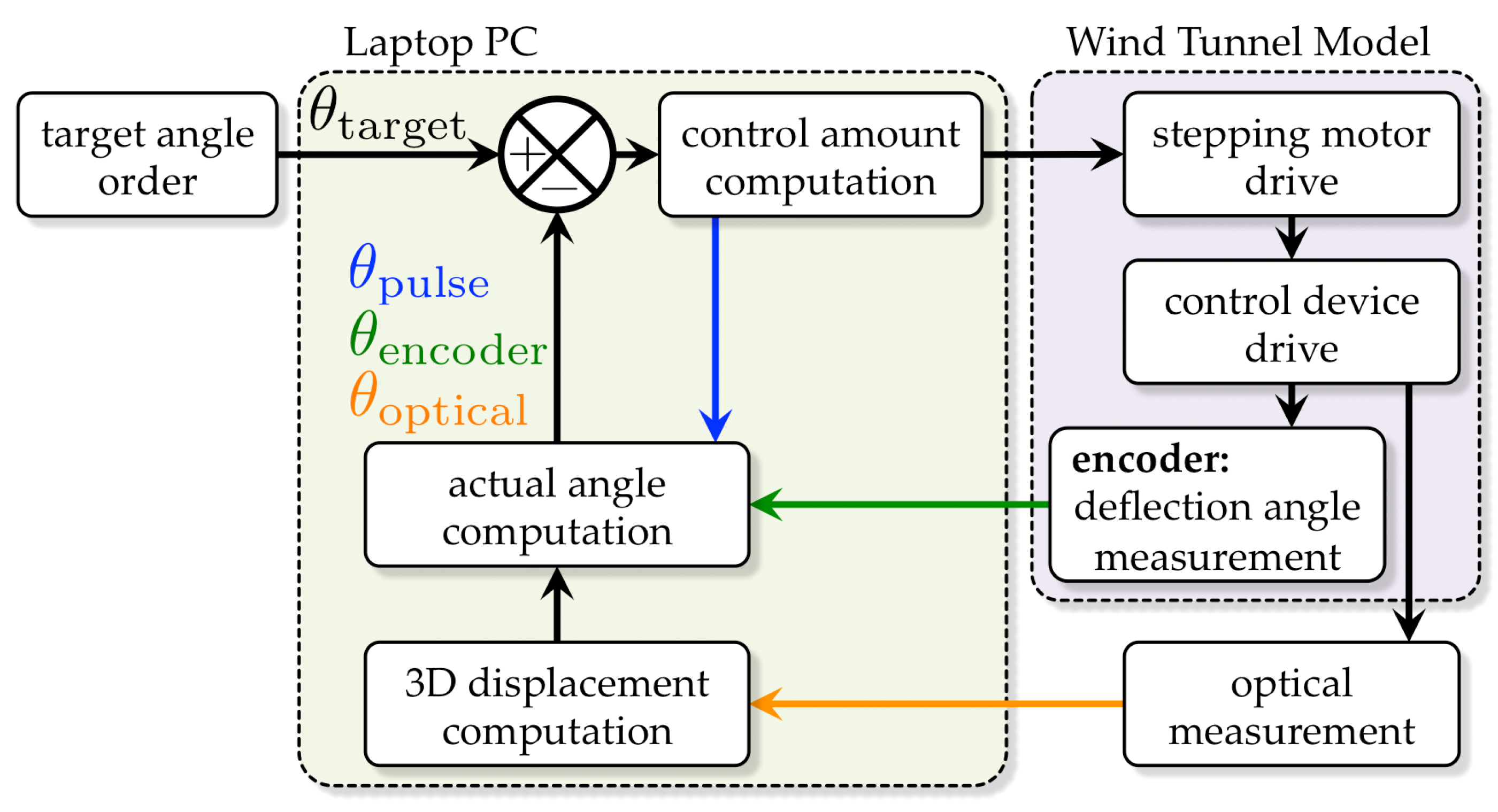 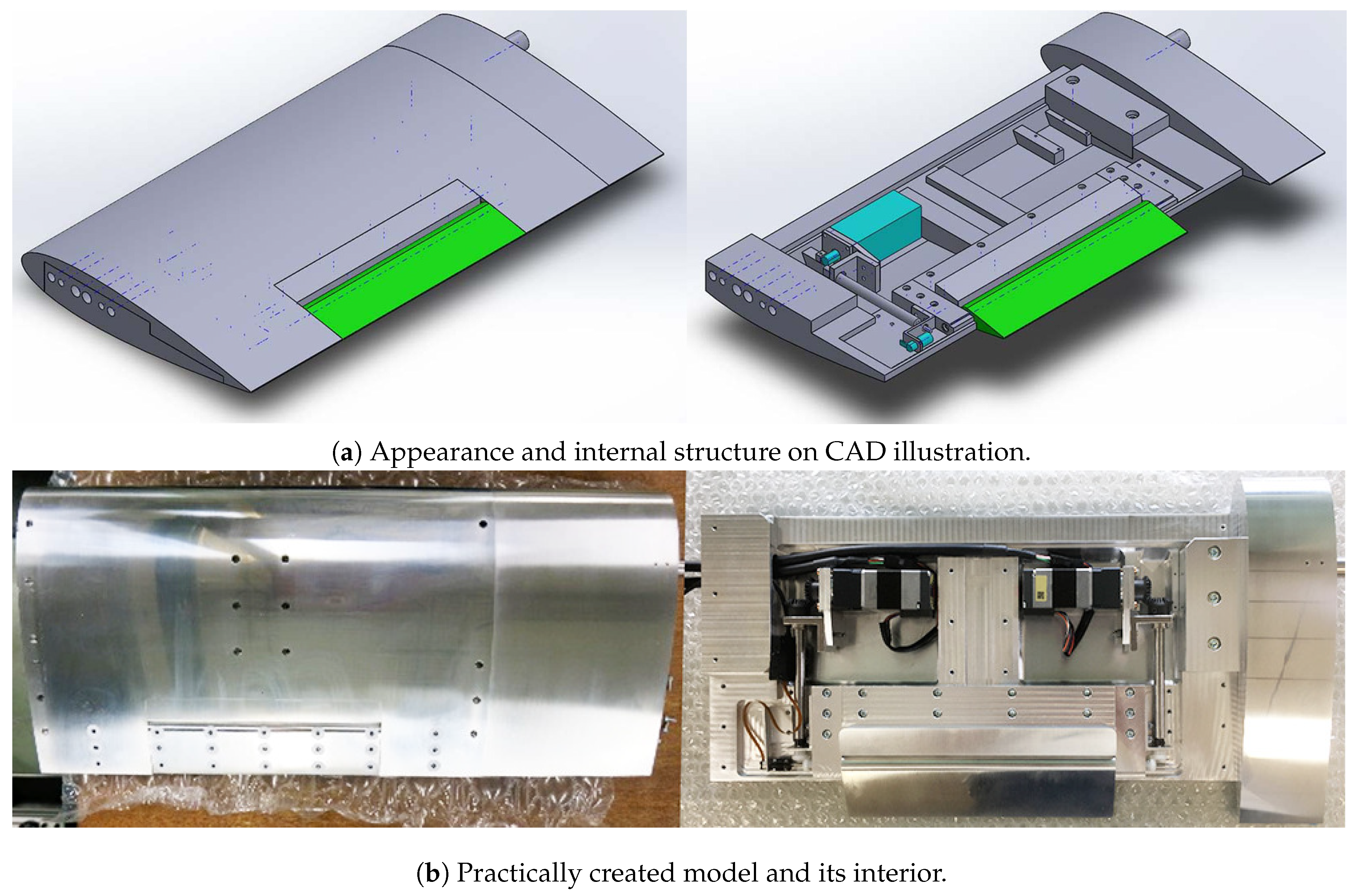 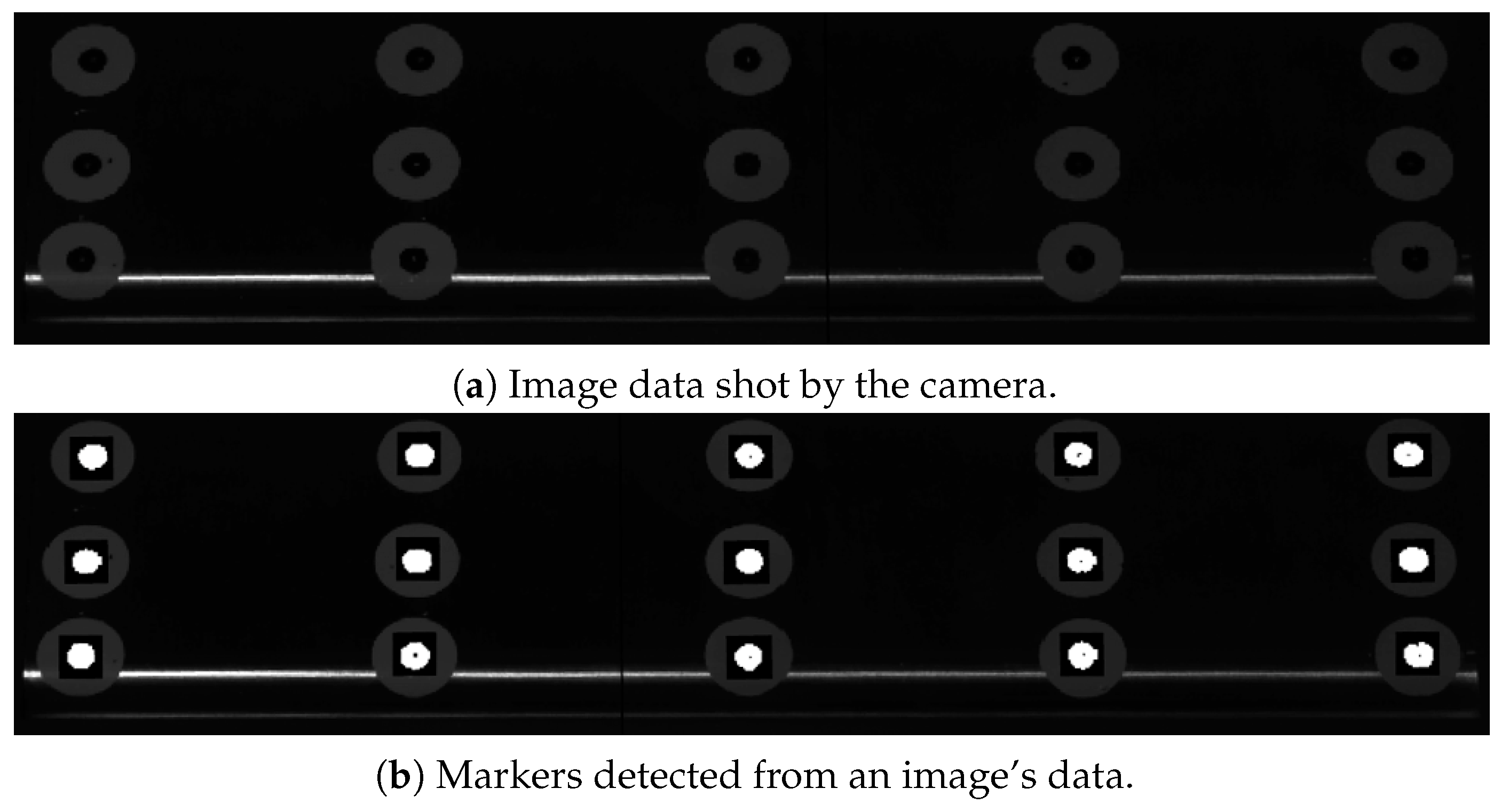 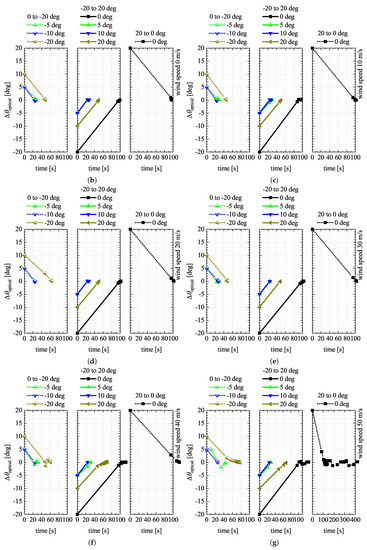