Inclusion of polymers into hydrocarbon fuels is a well-known procedure for hydrodynamical drag reduction. The decrease in hydrodynamic drag is caused by the Toms effect. In 1948, B. Toms [1] recognized the reduction in wall shear stress caused by the addition of small amount of polymer to a turbulent flowing fluid. This effect is widely used in pipeline transportation of oil and shipbuilding to reduce friction. The application of kerosene polymer additives for liquid propellant rocket engine (LPRE) efficiency enhancement has been studied recently. The use of additives may decrease pressure losses in the combustion chamber cooling channels by 20%–24%, enhance fuel pump efficiency by 13%–17%, and decrease turbine power by 7%–9% [2]. Polymer additives are most effective for engines with gas-generator cycles because the polymer additives in kerosene reduce the fuel massflow driving the turbine and do not participate in thrust creation.
It is commonly known that polymer additives influence the process of liquid atomization into droplets, increase the droplet mean diameter (DMD), and alter the droplet diameter distribution [3,4]. This feature of polymer additives is widely used for reduction of fuel mist ignition during fuel tank destruction in catastrophic events. Therefore, it is obvious to assume that the addition of polymers in kerosene would decrease the combustion performance due to increase in the droplet mean diameter.
However, the change in droplet mean diameter is not the main factor influencing combustion efficiency. In some cases, even a large increase in the DMD does not reduce combustion performance because the droplet diameter distribution type is also a highly important criterion. This is due to the fact that completely different shapes of the droplet diameter distributions can correspond to the same DMD. Also, two injectors spraying a liquid with the same average diameter can provide different combustion efficiency due to the fact that their design will give different droplet size distributions. This is because a different ratio of large and small droplets injected will give different combustion efficiency [5,6].
Estimation of the influence of polyisobutylene (PIB) additives on the combustion process during fire testing is difficult as the polymer additives are often destroyed in the cooling jacket channels and turbopump impeller. As a result, kerosene fuel seeps into the injector containing the destroyed polymer additive molecules. Previously conducted tests show that the use of PIB kerosene additives in modern LPREs (RD-107, RD-58M, RD-170) does not influence the operating process in the combustion chamber [7]. However, if the polymer molecules seep into the injector in the half-destroyed or undestroyed conditions, a different behavior may be seen, as other physical effects can be revealed, such as the drag reduction (main Toms effect), which can affect the flow parameters. This situation is possible during the use of polymer additives containing very large molecules, which in the pump or cooling channels may separate into smaller but still large fragments comparable to the size of the PIB molecules [8,9]. In this case, the polymer additive may significantly affect the combustion performance and eliminate the positive effects of drag reduction in the fuel feeding system.
The combustion process in the combustion chamber of an LPRE is a complicated physical phenomenon, which consists of a number of interdependent processes, namely, fuel flowing out of the injector, fuel jet atomization into droplets and ligaments, fuel heating and evaporation, and ignition and combustion in the gaseous phase.
Previously, several studies were conducted to describe the influence of PIB additive on the combustion process of kerosene in gaseous oxygen [7,10]. These studies, however, did not consider the issue of PIB influence on combustion efficiency in the presence of liquid (namely kerosene) film cooling.
This study aims to continue the previous research and is dedicated to investigation of the influence of PIB additives on the combustion process in the combustion chamber with kerosene film cooling, i.e., reductive conditions of the combustion gas, which is more typical of modern LPREs.

The objective of the present study concerns the effects of two types of kerosene: with PIB additives and without additives (pure kerosene). Table 1 describes the basic physical and chemical characteristics of kerosene in comparison with samples containing PIB additive in varying concentrations [11]. The data show that all physical properties of the kerosene samples are almost equal.

In order to estimate the influence of PIB additive in kerosene on the combustion performance, a special experimental LPRE using gaseous oxygen and kerosene was used in the study (Figure 1). The main feature of this design was a separate inlet for liquid component for the wall film cooling. In this manner, the design allows for regulating the wall film cooling massflow without affecting the combustion chamber core flow.
All fire experiments lasted 2 s. In each experiment, the gaseous oxygen valve was the first to open, after 50 ms the spark plug was switched on, after 50 ms the valve of kerosene injectors opened, after that in 200 ms the spark plug was switched off and in 100 ms the film cooling valve was opened. After that, in 1.7 s, the valve of the kerosene injectors was closed, then after 30 ms the film cooling valve was closed, and the valve of gaseous oxygen was the last to close. Experiments with pure kerosene and kerosene with PIB were conducted in the same sequence. All modes of the experiments are presented in Table 2. Such test conditions were used to reduce the temperature of the hot gas near the wall and to prevent overheating of the combustion chamber wall. Due to the fact that the liquid film under the combustion chamber conditions is atomized by the hot gas flow, the massflow of kerosene for the wall film cooling was chosen so that it was guaranteed to prevent this.
The problem of the film cooling massflow effect on the wall temperature was studied in detail in the works of the author and his colleagues earlier. Based on these studies and the experience of experimental work, the massflow for film cooling was selected. Details of these studies are described in [12,13].
The kerosene combustion efficiency was determined from the value of the relation between the experimental and theoretical characteristic velocities, as calculated from equilibrium thermodynamical composition of the combustion products [14]: where
—experimental characteristic velocity;
—theoretical characteristic velocity;
—experimental chamber pressure;
—throat area;
—combustion chamber massflow;
equilibrium composition gas constant for kerosene and oxygen combustion products, temperature and polytrophic constant computed at experimental combustion chamber pressure, and oxidizer to fuel ratio.
Fire tests were performed under ambient conditions using the Rocket Engines Department test bench at the Moscow Aviation Institute. Pure kerosene and kerosene containing 0.05% PIB by mass were used during the tests, and the characteristic velocity βexp of the engine was measured. This amount of PIB was selected from the results of the study [9], which showed that the concentration of PIB reduces the hydrodynamic drag in the pipe at the maximum possible value, other parameters being equal. The other measured parameters were fuel massflow, oxidizer massflow, outer wall temperature at 12 points, and combustion chamber pressure.
According to [15], the use of gaseous atomization eliminates the influence of the liquid properties on the linear sizes of the drops, and the droplet diameter is mainly determined by the atomization gas parameters. As the injectors used in the test engine are of the gaseous atomization type (atomized by gaseous oxygen similar to “air-blast atomizers”), it could be stated that the Sauter mean diameter (SMD) under these conditions and using the current design is mainly influenced by the oxidizer massflow and is not dependent on fuel properties such as kinematic viscosity.
The influence of PIB additives on heat exchange inside the combustion chamber and wall film cooling efficiency was estimated with data derived from 12 Type-K thermocouples, that were placed on the outer wall of the combustion chamber in the configuration shown in Figure 1: four thermocouples each in the three combustion camera sections.

The study shows that the PIB additive to kerosene increases the LPRE wall-film cooling efficiency. As noted in other similar studies, this research has also not shown any correlation between kerosene PIB additive and combustion efficiency. A small efficiency enhancement with the use of PIB kerosene is obvious due to the higher evaporation rate of the film cooling liquid droplets, thus resulting in higher mixing rates and combustion efficiency.
The results outlined in this paper can help determine the parameters of LPRE combustion chamber cooling systems with the use of PIB additive in kerosene. The combustion chamber cooling system developed with a provision for these effects would allow for specific impulse growth due to decreasing kerosene massflow wall-film cooling. In order to say how much the specific impulse of the combustion chamber will increase, it is necessary to make additional experiments with measuring the temperature of the wall under the conditions typical for combustion chambers of rocket engines with large thrusts. The conditions in the combustion chambers depend on many parameters such as total massflow, oxygen to fuel ratio, design of the injector, design of film cooling nozzles, etc. All these factors will affect the stability of the flow of kerosene film, and therefore the magnitude of the effect of reducing heat flux in wall of the combustion chamber.
Another positive effect of applying PIB additives could be the reduction of the required pump capacity, leading to the decrease in turbine power. As already noted, this is caused by the effect of hydraulic drag decrease in the engine feed line. This may lead to less turbine and gas generator massflow requirements. These changes can bring an augmentation to engine life and reliability, while also enhancing thrust for the same level of fuel reserve in the tanks.
Application of PIB kerosene in LPRE of staged combustion cycle can only insignificantly influence the engine thrust but can lead to reduction of pressure in the gas generator and main combustion chamber. This may enhance the engine reliability and life.
The main effect is estimated to be seen when using the PIB additive in LPRE with gas-generator cycle and especially with fuel-rich gas generator. It is known that a significant proportion of fuel reacts inside the gas generator in this type of LPRE. Combustion products then enter the turbine and outflow to atmosphere without thrust production. In the case of PIB kerosene use, the fuel massflow demand decreases, which means that more fuel can react in the main combustion chamber, leading to the growth in thrust.
Moreover, PIB or other polymer additive application to kerosene or other fuel component can allow for pressure decrease in the fuel supply system of developed and existing LPRE, which can either enhance the engine thrust, or improve its reliability and life, which is of prime importance for recoverable engines and return first stages of launching vehicles.

I.B. and E.S. have designed and investigated the fire tests and are the main authors of the paper. V.G., V.C. and P.L. are the specialists in PIB application in kerosene rocket engine who revised paper critically for important intellectual content. A.K. and Y.Y. participated in the analysis of the data and improvement of the paper. 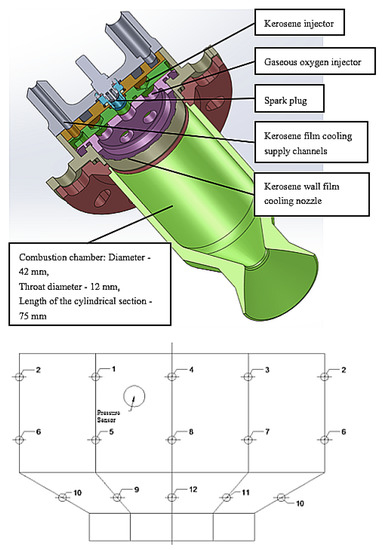 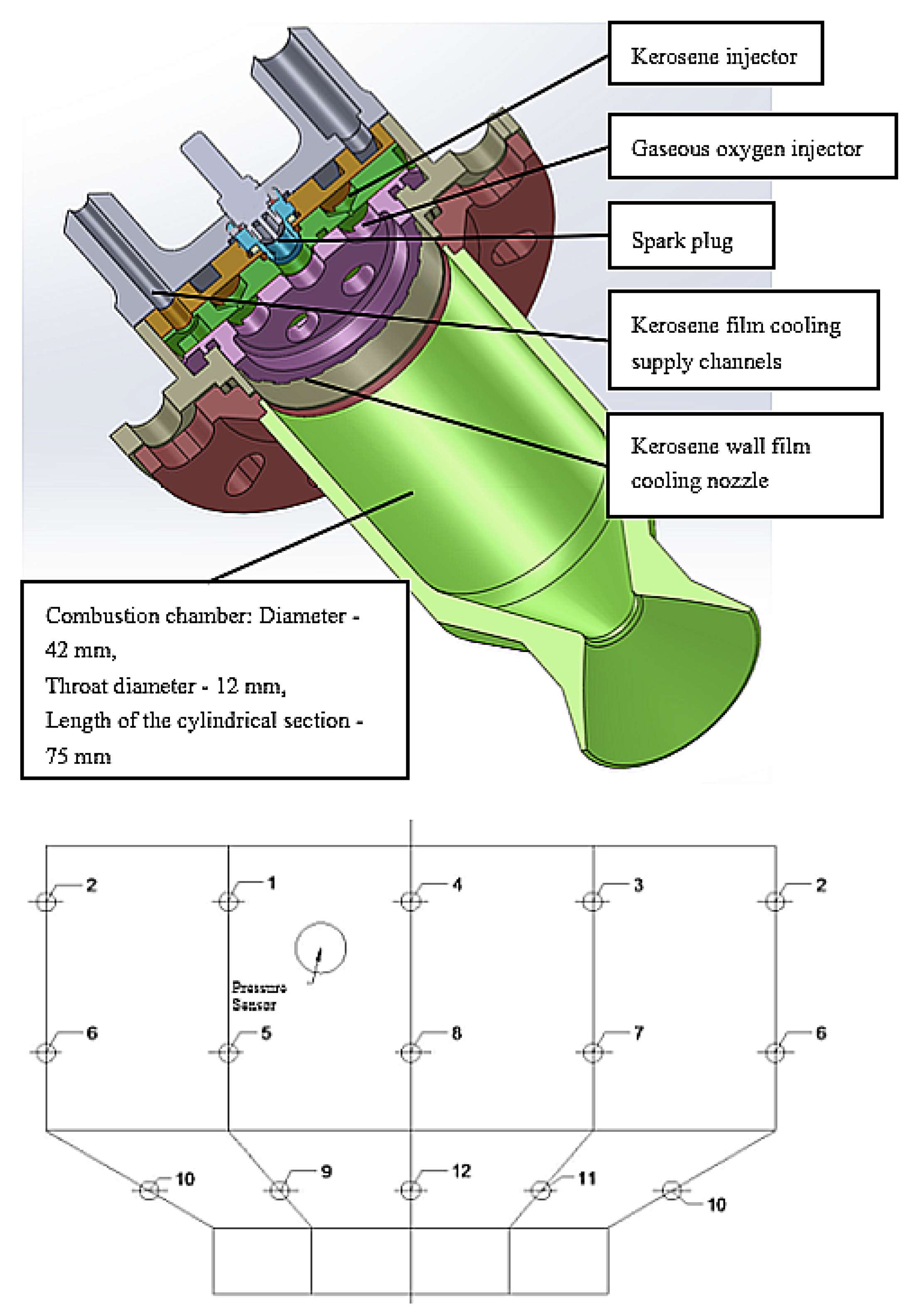 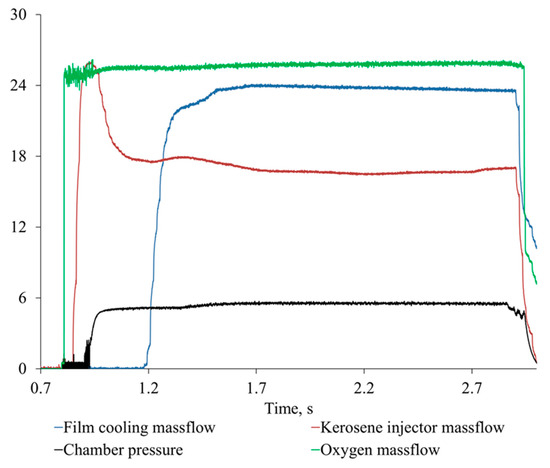 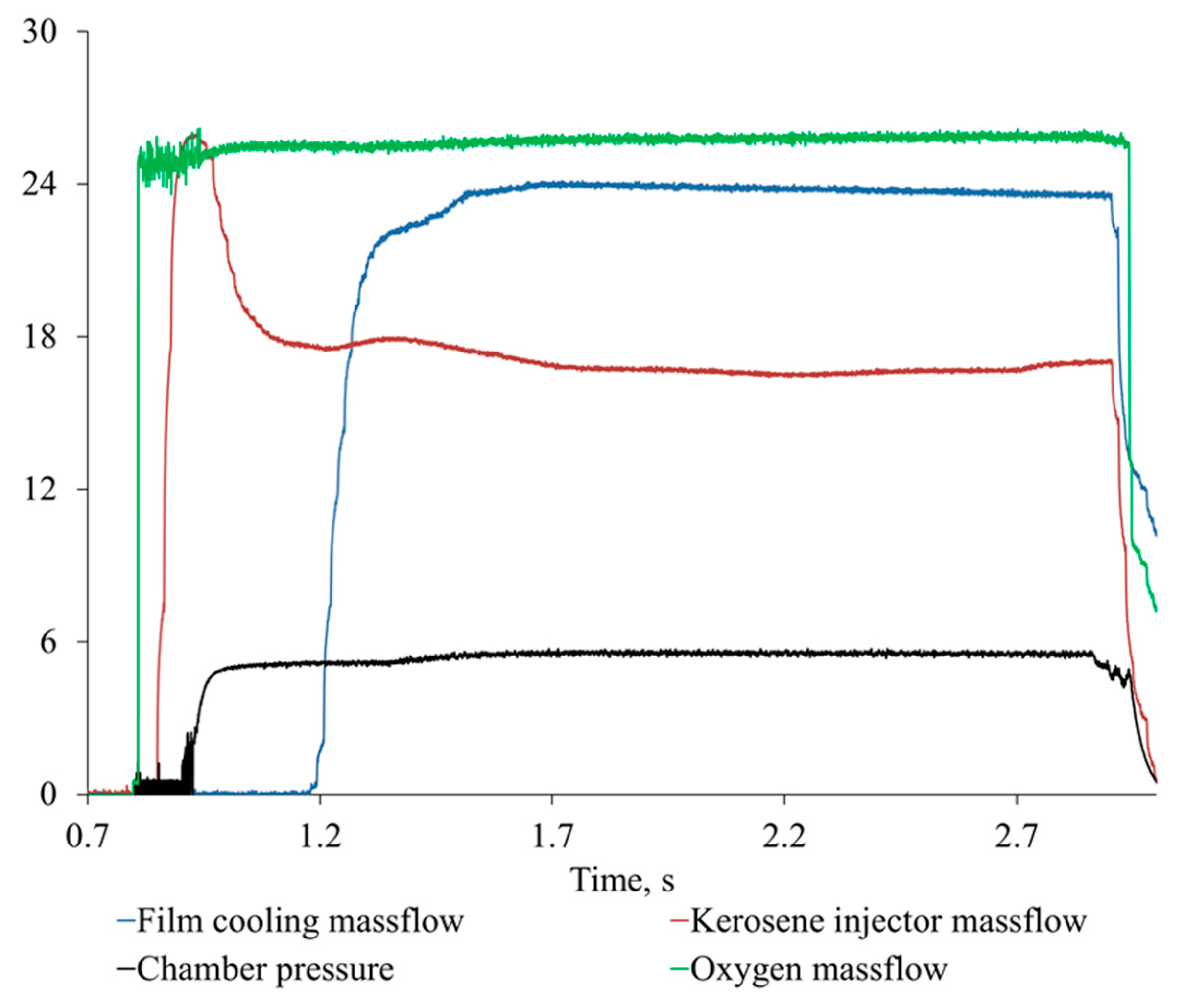 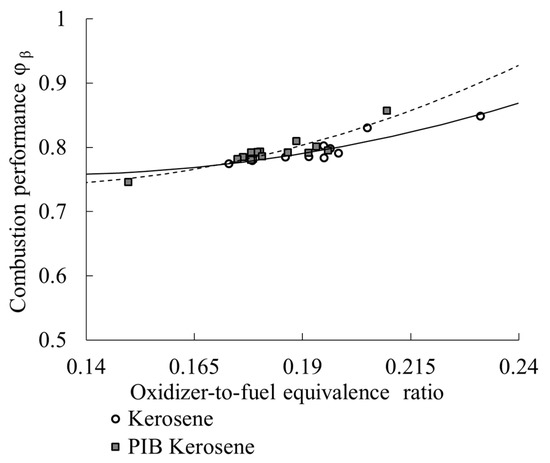 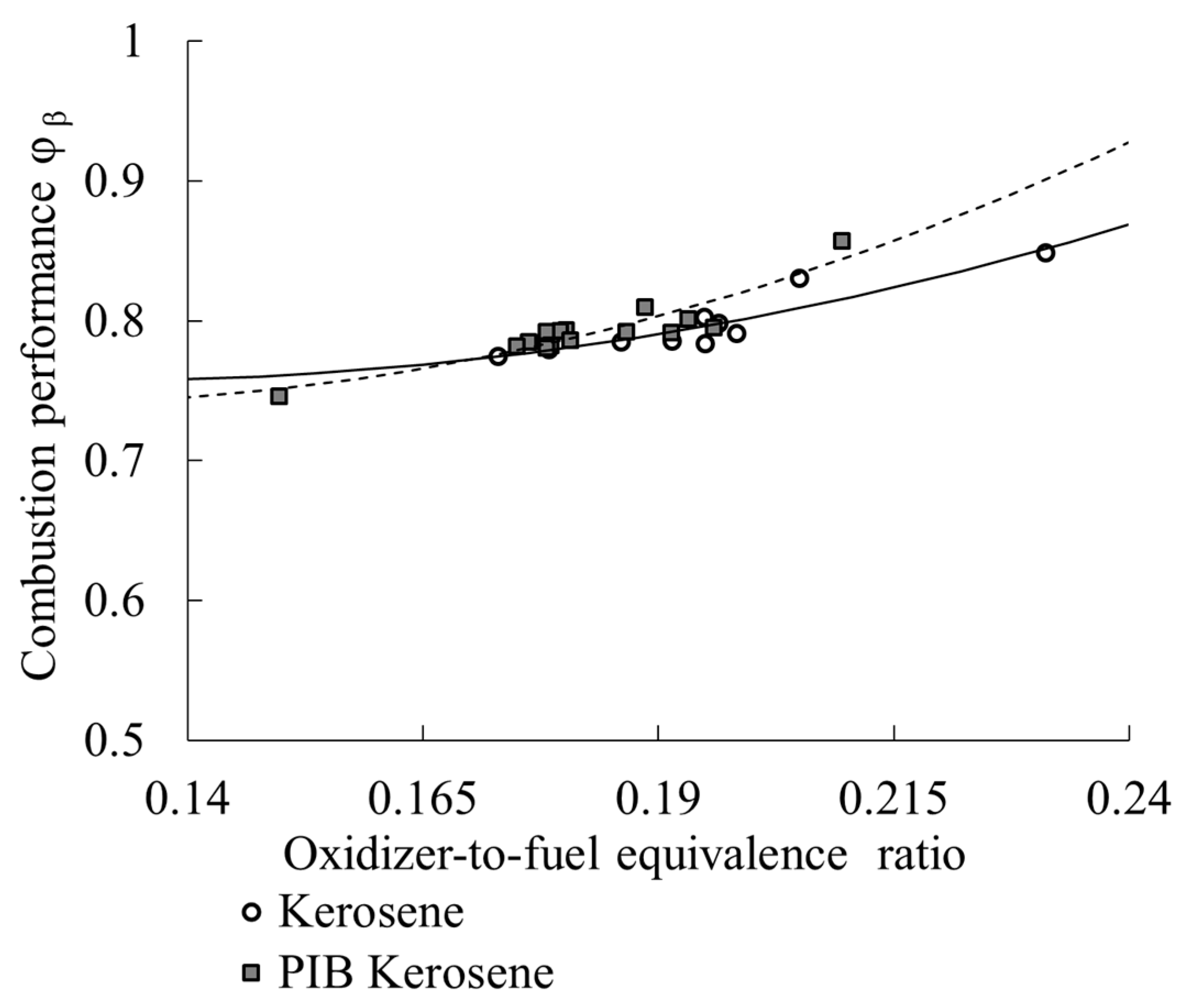 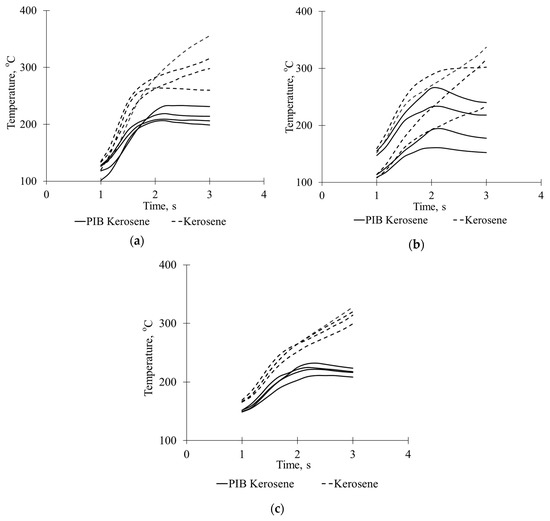 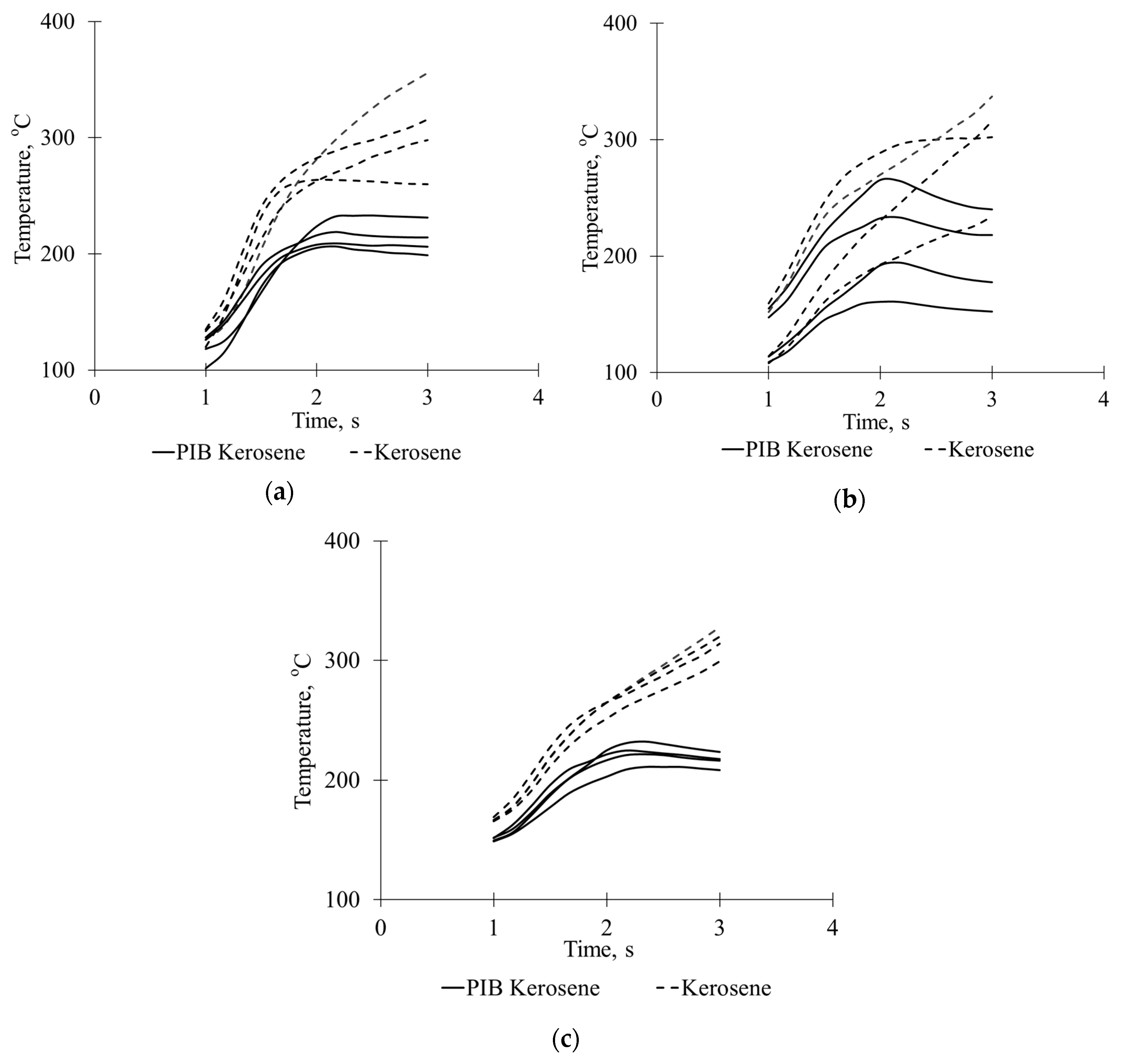 Table 2. Experimental results.
Table 2. Experimental results.
© 2019 by the authors. Licensee MDPI, Basel, Switzerland. This article is an open access article distributed under the terms and conditions of the Creative Commons Attribution (CC BY) license (http://creativecommons.org/licenses/by/4.0/).
We use cookies on our website to ensure you get the best experience. Read more about our cookies here.
Accept
We have just recently launched a new version of our website. Help us to further improve by taking part in this short 5 minute survey here. here.
Never show this again