In the work at hand, a shape memory alloy (SMA)-based system is presented. The system, conceived for releasing environmental sensors from ground or small unmanned aerial vehicles, UAV (often named UAS, unmanned aerial system), is made of a door, integrated into the bottom of the fuselage, a device distributor, operated by a couple of antagonistic SMA springs, and a kinematic chain, to synchronize the deployment operation with the system movement. On the basis of the specifications (weight, available space, energy supply, sensors size, etc.), the system design was addressed. After having identified the main system characteristics, a representative mock-up was manufactured, featuring the bottom part of the reference fuselage. Functionality tests were performed to prove the system capability to release the sensors; a detailed characterization was finally carried out, mainly finalized at correlating the kinematic chain displacement with the SMA spring temperature and the supplied electrical power. A comparison between theoretical predictions and experimental outcomes showed good agreement. View Full-Text
Keywords: shape memory alloy springs; UAV; sensor release shape memory alloy springs; UAV; sensor release
►▼ Show Figures 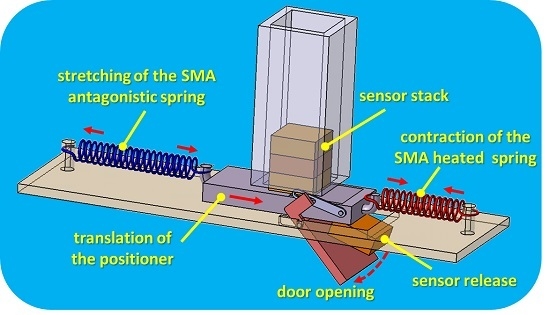