Gust Alleviation of a Large Aircraft with a Passive Twist Wingtip

Cognitive radar (CRr) is a recent radar paradigm that can potentially help drive aerospace innovation forward. Two specific platforms of cognitive radar used for target identification are discussed. One uses sequential hypothesis testing (SHT) in the receiver processing and is referred to as SHT-CRr and the other one uses maximum a posteriori (MAP) and is referred to as MAP-CRr. Our main goal in this article is to make a practical comparison between SHT-CRr and MAP-CRr platforms in terms of transmission energy efficiency. Since the performance metric for the SHT-CRr is the average number of illuminations (ANI) and the performance metric for MAP-CRr is the percentage of correct decisions (\(P_{cd}\)), a direct comparison between the platforms is difficult to perform. In this work, we introduce a useful procedure that involves a metric called total transmit energy (TTE) given a fixed \(P_{cd}\) as a metric to measure the transmit energy efficiency of both platforms. Lower TTE means that the platform is more efficient in achieving a desired \(P_{cd}\). To facilitate a robust comparison, a transmit-adaptive waveform that consistently outperforms the pulsed waveform in terms of both \(P_{cd}\) and ANI is needed. We show that a certain adaptive waveform called the probability weighted energy signal-to-noise ratio-based (PWE-SNR) waveform outperforms the pulsed wideband waveform (i.e., flat frequency response) in terms of ANI and \(P_{cd}\) for all ranges of transmit waveform energy. We also note that the \(P_{cd}\) performance of SHT-CRr can be drastically different from the probability threshold (i.e., the probability value that is used to stop radar illumination for the purposes of classification), which is critically important for CRr system designers to realize. Indeed, this fact turns out to be key in accomplishing our goal to compare SHT-CRr and MAP-CRr in terms of transmit energy efficiency. View Full-Text
Keywords: cognitive radar; target identification; probability of correct decision; average number of illuminations cognitive radar; target identification; probability of correct decision; average number of illuminations
►▼ Show Figures 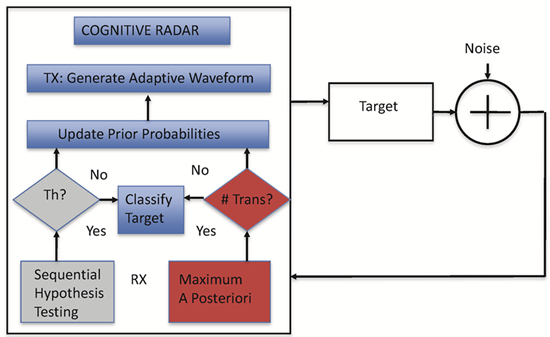