Land Use Change and Its Impacts on Land Surface Temperature in Galle City, Sri Lanka
Previous Article in Journal

Disconnect within Agriculture and Ecosystem Climate Effects, Adaptations and Policy

Joint Modeling of Severe Dust Storm Events in Arid and Hyper Arid Regions Based on Copula Theory: A Case Study in the Yazd Province, Iran

Located in the middle of the Loot desert and the Central desert of Iran, Yazd province extends from 29 degrees 52 min to 33 degrees and 27 min north latitude and 52 degrees 55 min to 56 degrees and 37 min east longitude and covers an approximate area of 131,575 square kilometers with the population of 990,818 people (Figure 1). Due to low precipitation, high temperature, and geographical location of the province, about half of its area is covered by desert lands, which are always exposed to wind erosion and dust storms, and it is considered one of the critical hotspots of wind erosion in Iran [40]. Dust storms occasionally cause darkening air in the area due to their high intensity. In this region, severe dust storms cause irreparable damage each year, especially in the agricultural sector. Indeed, the farmers suffer from dust events more than others. Additionally, road accidents due to decreasing vertical visibility; air pollution; and the destruction of the buildings, roads, and channels are other effects of the dust storm that occur in this area every year [41]. In addition to sand dunes, there are numerous deserts or salty plains in the province, including the Siah Kooh desert in the north, the Daranjir Desert in the east, Abarkuh Desert in the southwest, and Saghand Desert in the northeast. Meteorological data and statistics indicate that the frequency of dust phenomena, including dust storms, is high in the study area [39]. Hence, recognizing the phenomenon of dust and the return period of severe storms in this region is important for combating its harmful effects. To this end, in order to estimate the return periods of dust storms, the stormy days were extracted based on the definition of the Meteorological Organization during the statistical period from 1982 to 2017 [42]. Forty dust storm events were identified during this period. Maximum wind speed variables at 10 m above ground level; geopotential height; and vertical velocity at three levels of 500, 850, and 1000 hPa were extracted, respectively, from synoptic station data and NCEP (National Centers for Environmental Prediction) data for analysis.

2.1.1. Estimation of the Parameters of the Copula Functions

In order to estimate the parameters of the copula functions, nonparametric and parametric methods may be used. One nonparametric estimation approach is to use the relationship between the generator function of each copula and the Kendall correlation coefficient (Equation (2)) [45]. In the parametric method, the copula parameter is estimated by maximizing a logarithmic likelihood function (Equation (3)), where is copula density function, F is marginal distribution function, and x1k, x2k, …, xpk (k = 1, …, n) are random variables. where is Kendall correlation coefficient and L is a likelihood function that can be maximized.

In order to select the most suitable copula function to fit the dust storm variables, the joint empirical probability values (JEPV) of the pair of variables were calculated by the empirical copula (Equation (4)) and then were compared with the values obtained from the theoretical copulas (Archimedes and elliptical families). Ordinary least squares method (OLS) was used to compare empirical copulas with each of theoretical copula functions. The OLS method, based on the square of the difference between the empirical and theoretical values, can be used to choose the best function form and parameter values (Equation (5)). Two information criteria—(AIC) and (BIC)—were also used (Equations (6) and (7)) [46,47]. In Equations (4)–(7), u and v are the empirical probability values of the maximum wind speed and the geopotential height/vertical velocity, respectively; Pei is the empirical copula value; Pi is the theoretical copula value; k is the number of model parameters; n is the number of observations; and L is the maximum log- likelihood function.

It is necessary to use the copula functions for correlated predictor variables. For this purpose, the correlation between the pairs of maximum wind speed–geopotential height and maximum wind speed–vertical velocity at the three levels of 500, 850, and 1000 hPa was determined by the Kendall coefficient on the day of the dust storm and one day before the dust storm. The Kendall coefficient showed that on dust storm days, maximum wind speed as the main factor has a negative and significant relation with the geopotential height at 500 hPa and has a positive and significant relation with the vertical velocity at 1000 hPa at 5% significant level (p value < 0.05). There is no significant correlation between variables on the day before the dust storm. Table 2 shows the Kendall correlation coefficients within pair of dust storm predictor variables.
In order to determine the marginal functions of the pair of variables, more than 20 univariate distribution functions were fitted to the variables, and the most appropriate functions based on Kolmogorov–Smirnov, Anderson Darling, and chi square tests were selected. Based on the results, the Wakeby distribution function was identified as the most suitable fit for maximum wind speed data and generalized extreme value function (GEV) as the most suitable fit to the geopotential height of 500 hPa and the vertical velocity at 1000 hPa (Table 3).

In this study, the negative correlation between the pair of maximum wind speed–geopotential height resulted in candidate copulas for bivariate modeling of the dust storm that included Frank, Gaussian, Rotated Clayton, Rotated Gumbel, Student t, and Joe. Similarly, based on the positive correlation between the pair of variables maximum wind speed–vertical velocity, the copula types considered were the Frank, Gumbel, Clayton, Gaussian, and Student t (Table 1). The parameters of the copula functions were estimated by both parametric and nonparametric methods. The Student t copula parameters, of which there are two parameters, are estimated only by the parametric method. The nonparametric method, which is based on the relationship between the Kendall coefficient (t) and the generator function of each copula, applies only to functions with one parameter. In Table 4 and Table 5, the values of the copula parameters are presented based on both parametric and nonparametric methods for the pair of dust storm variable. After estimating the parameters, all selected copula functions were fitted to a pair of dust storm variables and the best fit was obtained by comparing the values of the empirical copula function against each of the above copulas as well as the OLS, AIC, and BIC criteria for the bivariate modeling of dust storms. Based on the selection criteria, Student t and Gaussian copulas were selected for bivariate modeling because of having the lowest values of AIC, BIC, and OLS (Table 4 and Table 5). Figure 2 shows the q-q plot of the Gaussian copula and Student t copula for the pair of dust storm variables. The high correlation between the empirical and theoretical copulas in each pair of variables expresses the appropriateness of the Student t and Gaussian functions for the bivariate modeling of dust storm. Figure 3 shows the probability density values of the selected copula functions (Student t and Gaussian) for each of variables. The joint probability values (Figure 3) for the dust storm variables, maximum wind speed, and geopotential height have a symmetric correlation in upper and lower tails (Figure 3a), while the maximum wind speed and the vertical velocity are not correlated in the upper and lower tails (Figure 3b).

Dust storms are occurring frequently as a natural disaster, partly due to global warming and desertification. Due to the repetition of this phenomenon in recent years, information about its return period is a key reference for risk assessment, as well as the forecast and warning of the medium and long-term risks [48]. The estimation of the return period of natural disasters, such as dust storm, will determine the course of the occurrence of this phenomenon in the future and allow for the assessment of its severity purposefully and quantitatively. In fact, calculating the return period can predict the occurrence time of a phenomenon on different time scales for the future.
In this study, the return period of 40 dust storm events during the statistical period was estimated using copula theory. Because the generator factors of dust storm have different probability distribution function, there is a nonlinear relationship between them. Therefore, copula theory was used to solve this problem. Bivariate modeling was performed based on the effective factors of dust storm events. These parameters were selected at two spatial levels (near-surface and upper-atmosphere levels). At near-surface level, the maximum wind speed was applied to joint analysis of severe dust storm events, while vertical velocity and geopotential height were considered as upper atmospheric level parameters.
There are few research papers that can compared with our finding in this study. However, the results of correlation analysis indicate that there is a significant negative relationship between maximum wind speed and geopotential height, and a positive and significant relationship between the maximum wind speed and vertical velocity. Based on the results of our best fit, the Student-t and Gaussian copula functions were used for bivariate modeling of storm storms. These findings were not similar to the results of [7,29], and [30], due to the different dust storm variables. Those selected Clayton and Frank copulas for bivariate modeling of dust storm.
However, our finding indicated that the bivariate return period of dust storm is closer to reality than univariate return period. These results are in agreement with [29], who showed bivariate return period of dust storm was smaller than the univariate return period.
Estimation of the occurrence time of dust storms in the future is very important to prevent the probability of hazards and for risk management. In this study, considering the random nature of dust storm, bivariate modeling was conducted to evaluate this phenomenon by copula functions.
The results of the dust storm return period showed that the values obtained from the pair of maximum wind speed–geopotential height can describe the dust storm conditions better than the pair of maximum wind speed–vertical velocity, because the occurrence time of severe dust storm and maximum wind speed, recorded at the study period, is almost similar. Generally, the finding of this study indicated that the joint modeling of dust storm events using the pair variable of maximum wind speed–vertical velocity can help provide the practical strategies to reduce the potential hazards as a consequence of severe dust storm. Finally, we propose using other copula functions such as Gaussian mixture copula to joint modeling of dust storm events. Due to nonlinear relationship between the effective parameter of dust storm event, the Gaussian mixture copula can model highly nonlinearity in the data [49]. 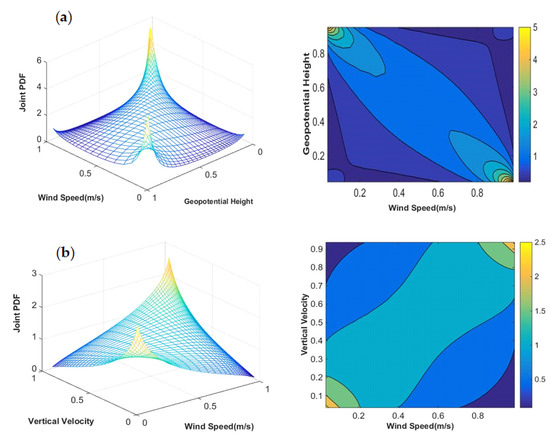