The urban heat island (UHI) phenomenon is an important research topic in the scholarly community. There are only few research studies related to the UHI in the Seoul metropolitan area (SMA). Therefore, this study examined the impact of urbanization on the formation of UHI in the SMA as a geospatial study by using Landsat data from 1996, 2006, and 2017. For this purpose, we analyzed the relative variation of land surface temperature (LST) with changes of land use/land cover (LULC) rather than absolute values of LST using gradient, intensity, and directional analyses. It was observed that the impervious surface (IS) has expanded, and the UHI effect was more penetrating in the study area, with considerable loss of other LULC including green surfaces along with the rapid urbanization of the study area. In this study, we divided the IS into persistent IS (PIS) and newly added IS (NAIS). The spatial distribution of the IS, forest surface (FS), PIS, and NAIS was observed based on gradient zones (GZs). The results show that GZ1 recorded a difference of 6.0 °C when compared with the GZ109 in 2017. The results also show that the city center was warmer than the surrounding areas during the period of study. Results reveal that the mean LST has a strong significant positive relationship with a fraction of IS and PIS in 2006 and 2017. On other hand, the mean LST has a strong negative relationship with a fraction of FS and NAIS in the same time points. Relatively low temperatures were recorded in FS and NAIS in both time points. Further, it was proved that the local climate of the SMA and its surroundings had been affected by the UHI effect. Therefore, urban planners of the SMA should seriously consider the issue and plan to mitigate the effect by improving the green surfaces of the city. More greening-oriented concepts are recommended in both horizontal and vertical directions of the SMA, that can be used to control the negative impact associated with UHI. The overall outputs of the study could be used as a proxy indicator for the sustainability of the SMA and its surroundings. View Full-Text
Keywords: urban heat island; urban heat island intensity; gradient analysis; Seoul metropolitan area; Republic of Korea urban heat island; urban heat island intensity; gradient analysis; Seoul metropolitan area; Republic of Korea
►▼ Show Figures 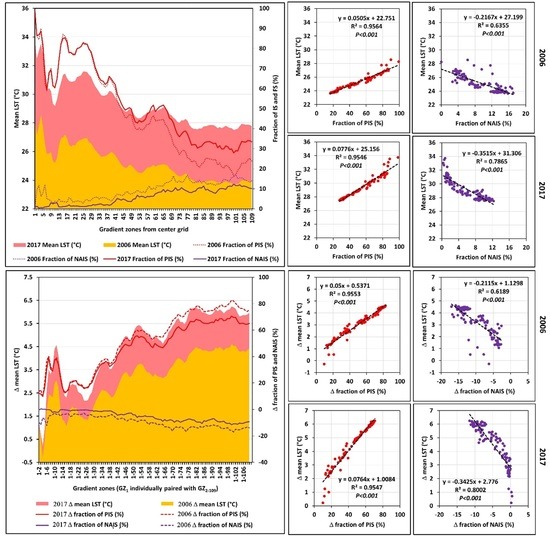