The future climate is projected to change rapidly with potentially severe consequences for global food security. This study aims to improve the understanding of future changes in the suitability of crop growth conditions. It proposes a definition of crop realization, of the climate departure from recent historical variability, or crop–climate departure. Four statistically downscaled and bias-corrected Global Climate Models (GCMs): CCCMA, CNRM5, NOAA-GFDL, and MIROC5 performed simulations for the period 1960–2100 under the Representative Concentration Pathway RCP8.5 scenario to compute 20 year moving averages at 5-year increments. These were used to drive a crop suitability model, Ecocrop, for eight different crops across the three Food and Agriculture Organizations (FAO) AgroEcological Zones (AEZs) of West Africa (Guinea, Sahel, and Savanna). Simulations using historical climate data found that all crops except maize had a suitability index value (SIV) ≥0.50 outside the Sahel region, equivalent to conditions being suitable or strongly suitable. Simulations of future climate reveal that warming is projected to constrain crop growth suitability for cassava and pineapple in the Guinea zone. A potential for the northward expansion of maize is projected by the end of the century, suggesting a future opportunity for its growth in the southern Sahel zone. Crop growth conditions for mango and pearl millet remain suitable across all three AEZs. In general, crops in the Savanna AEZ are the most sensitive to the projected changes in climate. The changes in the crop–climate relationship suggests a future constraint in crop suitability, which could be detrimental to future food security in West Africa. Further studies to explore associated short- and long-term adaptation options are recommended. View Full-Text
Keywords: climate-departure; crop–climate departure; crop suitability; Ecocrop; food security; West Africa climate-departure; crop–climate departure; crop suitability; Ecocrop; food security; West Africa
►▼ Show Figures 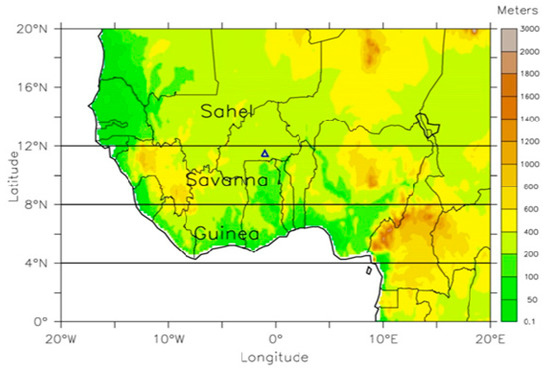