Impact of Climate Change on Twenty-First Century Crop Yields in the U.S.

Crop yields are strongly dependent on the average climate, extreme temperatures, and carbon dioxide concentrations, all of which are projected to increase in the coming century. In this study, a statistical model was created to predict US yields to 2100 for three crops using low and high-emissions future scenarios (RCP 4.5 and 8.5). The model is based on linear regressions between historical crop yields and daily weather observations since 1970 for every county in the US. Yields were found to be most strongly dependent on heat waves, summer average temperatures, and killing degree days; these relationships were hence used to predict future yields. The model shows that warming temperatures will significantly decrease corn and soybean yields, but will not have as strong of an influence on rice. Before accounting for CO2 fertilization, crops in the high-emissions scenario are predicted to produce 77%, 85%, and 96% of their expected yield without climate change for corn, soybeans, and rice, respectively. When a simple CO2 fertilization factor is included, corn, a C4 plant, increases slightly, while the yields of the C3 plants (soybeans and rice) are actually predicted to increase compared to today’s yields. This study exhibits the wide range of possible impacts of climate change on crop yields in the coming century, and emphasizes the need for field research on the combined effects of CO2 fertilization and heat extremes. View Full-Text
Keywords: future crop yields; climate change impacts; CO2 fertilization; corn; rice; soybeans future crop yields; climate change impacts; CO2 fertilization; corn; rice; soybeans
►▼ Show Figures 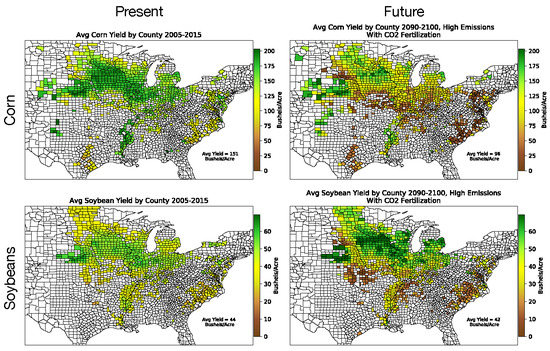