Acknowledgement to Reviewers of Climate in 2017

Micro-Scale Variability of Air Temperature within a Local Climate Zone in Berlin, Germany, during Summer

The urban climate, especially the near-surface air temperature (), is influenced to large amounts by urban surface properties on the local-scale. Landscape classification schemes, like the Local Climate Zone (LCZ) concept, classify neighbourhoods on this scale based on their surface properties, neglecting sub-scale heterogeneity in the urban structure and its potential effects on . To quantify sub-scale variability, a measurement campaign with eleven stationary sensors was conducted within one LCZ (class 2B, compact midrise with scattered trees) in Berlin, Germany, during 22 days in summer 2016. Correlation analyses were performed between observed spatial differences and micro-scale morphometric parameters around the measurement sites, such as sky view factor and building surface fraction. The results show mean night-time differences of up to 1 K between the different sites. On a clear, calm and dry day, the daytime difference reached 3 K. At night-time, the variability can be best explained by the building surface fraction within a radius of 50 m. Further, a nocturnal cooling influence of a neighbouring green space could be observed. The observed micro-scale variability was smaller than differences to other LCZ classes, highlighting the applicability of the LCZ concept. View Full-Text
Keywords: urban climate; local climate zone (LCZ); microclimate; variability; air temperature; Berlin urban climate; local climate zone (LCZ); microclimate; variability; air temperature; Berlin
►▼ Show Figures 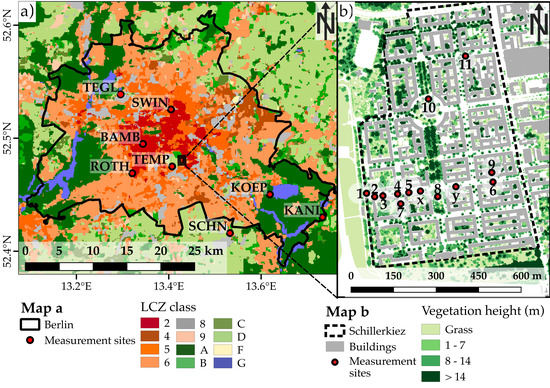