Towards the Integrated Study of Urban Climate, Air Pollution, and Public Health
Previous Article in Journal

A Statistical Analysis of the Relationship between Brown Haze and Surface Air Pollution Levels on Respiratory Hospital Admissions in Auckland, New Zealand

The Challenge of Urban Heat Exposure under Climate Change: An Analysis of Cities in the Sustainable Healthy Urban Environments (SHUE) Database

The so far largely unabated emissions of greenhouse gases (GHGs) are expected to increase global temperatures substantially over this century. We quantify the patterns of increases for 246 globally-representative cities in the Sustainable Healthy Urban Environments (SHUE) database. We used an ensemble of 18 global climate models (GCMs) run under a low (RCP2.6) and high (RCP8.5) emissions scenario to estimate the increase in monthly mean temperatures by 2050 and 2100 based on 30-year averages. Model simulations were from the Coupled Model Inter-comparison Project Phase 5 (CMIP5). Annual mean temperature increases were 0.93 degrees Celsius by 2050 and 1.10 degrees Celsius by 2100 under RCP2.6, and 1.27 and 4.15 degrees Celsius under RCP8.5, but with substantial city-to-city variation. By 2100, under RCP2.6 no city exceeds an increase in Tmean > 2 degrees Celsius (relative to a 2017 baseline), while all do under RCP8.5, some with increases in Tmean close to, or even greater than, 7 degrees Celsius. The increases were greatest in cities of mid to high latitude, in humid temperate and dry climate regions, and with large seasonal variation in temperature. Cities are likely to experience large increases in hottest month mean temperatures under high GHG emissions trajectories, which will often present substantial challenges to adaptation and health protection. View Full-Text
Keywords: climate change; urban heat; temperature; sustainability; urban health climate change; urban heat; temperature; sustainability; urban health
►▼ Show Figures 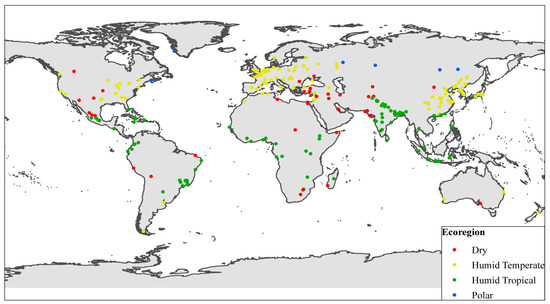