Passive microwave observations from various spaceborne sensors have been linked to the soil moisture of the Earth’s surface layer. A new generation of passive microwave sensors are dedicated to retrieving this variable and make observations in the single theoretically optimal L-band frequency (1–2 GHz). Previous generations of passive microwave sensors made observations in a range of higher frequencies, allowing for simultaneous estimation of additional variables required for solving the radiative transfer equation. One of these additional variables is land surface temperature, which plays a unique role in the radiative transfer equation and has an influence on the final quality of retrieved soil moisture anomalies. This study presents an optimization procedure for soil moisture retrievals through a quasi-global precipitation-based verification technique, the so-called Rvalue metric. Various land surface temperature scenarios were evaluated in which biases were added to an existing linear regression, specifically focusing on improving the skills to capture the temporal variability of soil moisture. We focus on the relative quality of the day-time (01:30 pm) observations from the Advanced Microwave Scanning Radiometer for Earth Observing System (AMSR-E), as these are theoretically most challenging due to the thermal equilibrium theory, and existing studies indicate that larger improvements are possible for these observations compared to their night-time (01:30 am) equivalent. Soil moisture data used in this study were retrieved through the Land Parameter Retrieval Model (LPRM), and in line with theory, both satellite paths show a unique and distinct degradation as a function of vegetation density. Both the ascending (01:30 pm) and descending (01:30 am) paths of the publicly available and widely used AMSR-E LPRM soil moisture products were used for benchmarking purposes. Several scenarios were employed in which the land surface temperature input for the radiative transfer was varied by imposing a bias on an existing regression. These scenarios were evaluated through the Rvalue technique, resulting in optimal bias values on top of this regression. In a next step, these optimal bias values were incorporated in order to re-calibrate the existing linear regression, resulting in a quasi-global uniform LST relation for day-time observations. In a final step, day-time soil moisture retrievals using the re-calibrated land surface temperature relation were again validated through the Rvalue technique. Results indicate an average increasing Rvalue of 16.5%, which indicates a better performance obtained through the re-calibration. This number was confirmed through an independent Triple Collocation verification over the same domain, demonstrating an average root mean square error reduction of 15.3%. Furthermore, a comparison against an extensive in situ database (679 stations) also indicates a generally higher quality for the re-calibrated dataset. Besides the improved day-time dataset, this study furthermore provides insights on the relative quality of soil moisture retrieved from AMSR-E’s day- and night-time observations. View Full-Text
Keywords: soil moisture; anomalies; land surface temperature; AMSR-E soil moisture; anomalies; land surface temperature; AMSR-E
►▼ Show Figures 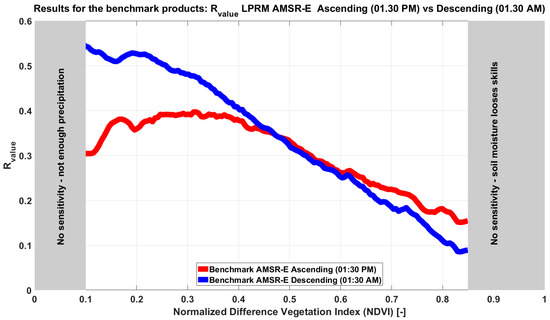