The Vulnerability of Rice Value Chains in Sub-Saharan Africa: A Review

Climate models use the parameter cloud fraction (CF) to determine the radiative fluxes through the atmosphere and at the surface. A small increase of 4% in the area of low level stratus clouds would be sufficient to offset the 2–3 K predicted rise in global mean temperature due to a doubling of the atmospheric CO concentration [1]. Arrays of ground based sensors located in diverse climate regimes have been used for more than 20 years by the Atmospheric Radiation Monitoring (ARM) Program to study the impact of clouds on the radiation budget (https://www.arm.gov/about/history) [2]. Climatologies of CF are considered for the choice of suitable sites for solar power plants [3]. Further, supercooled liquid water clouds are a serious hazard for aviation [4]. For all these reasons, long-term monitoring of CF of liquid water clouds is required. An intercomparison of different measurement techniques for thin liquid water clouds and radiative fluxes was given by [5]. They emphasized that large differences in retrievals of liquid water amount and droplet size still must be resolved.
Ground-based microwave radiometers have the advantage that they continuously monitor the integrated liquid water (ILW) along a line of sight throughout the cloud under all weather conditions during day- and nighttime [6,7]. The measurement noise of integrated liquid water can be as small as 0.77 m (or 0.77 g/m) as determined by [7] for the TROWARA radiometer at Bern, Switzerland. Contrary to [7], the present study utilizes the infrared brightness temperature of the m channel of TROWARA in addition to the microwave channels for the data interpretation. This enhanced measurement information permits us to separate for thick supercooled liquid water clouds and thick warm liquid water clouds. In addition, the small measurement error of TROWARA supports the reliable detection of thin liquid water clouds with ILW between 0.0023 and 0.03 mm.
In the following, we give a brief overview of past studies on the climatology and trends of CF of liquid water clouds. A 10-year cloud fraction climatology was derived from TROWARA data from 2004 to 2014 [6]. The CF values varied from 40% during summer to 60% during winter [7]. The authors of [6] found that the regional analysis of the Weather Research and Forecasting (WRF) model underestimates the regional cloud fraction at Bern (17% for WRF and 40% for TROWARA in summer 2012 at Bern). The High Resolution Infrared Radiometer Sounder (HIRS) onboard the NOAA satellites observed a quite constant cloud cover over an interval of 22 years with a cloud fraction of 75% [8]. However, cloud fraction of high clouds in the upper troposphere showed a significant trend of +0.2%/yr. Cloud fraction from the Terra and Aqua Moderate Resolution Imaging Spectroradiometers (MODIS) showed a nice agreement with ground-based cloud fraction observations at several Swiss stations from 2000 to 2012 [9]. The mean cloud fraction of MODIS was between 59% and 65% at the Swiss sites. The bias of MODIS with respect to the ground-based observations of CF was between −2.5% and +5%.
Data from the International Satellite Cloud Climatology Project (ISCCP) showed negative trends in CF (−0.3%/yr) during dry season and positive trends (0.1%/yr) during wet season in Amazonia over a time interval of two decades [10]. Based on ISCCP data from 60S to 60N, it was found that CF of upper level clouds over land decreased by 1.5% from 1971 to 1996 [11]. In [12], the authors compared cloud parameters from 12 different satellite data sets. The global mean of CF ranged between 55% and 73%. The last IPCC report (Intergovernmental Panel on Climate Change) concluded that substantial ambiguity and therefore low confidence remains in the surface-based and satellite-based observations of global-scale cloud variability and trends [13]. The ambiguities can be caused by different spatio-temporal sampling, changes in the aspect angles and other reasons. In the following, we show that ground-based microwave radiometry is a stable and objective method for long-term monitoring of CF.

The study showed that the ground-based microwave radiometer TROWARA performed an objective, stable and automatic long-term monitoring of cloud fraction above Bern which is representative for the Swiss plateau. The authors of [6] already showed that the atmospheric water parameters observed by TROWARA can be easily compared to similar parameters simulated by the WRF model. Thus, the CF values and CF trends of liquid water clouds obtained by TROWARA are of a high value for testing of cloud parameterisations in weather and climate models. In the present study, a significant trend was not found for the class of all liquid water clouds. We found that thick, warm liquid water clouds had a significant positive trend in the November and December data from 2004 to 2015. CF of supercooled liquid water clouds significantly decreased in the December series. CF of thin liquid water has a significant negative trend in the yearly means, and this trend is mainly due to the March data. The increase of warm, thick clouds could be related to an increase of air temperature at 1.5 km altitude above Bern from 2004 to 2015 and a coincident increase of integrated water vapour above Bern. The physical reason is an open question, for example, a change in the transport of subtropical, humid and warm air to Bern could be a possibility.

Federico Cossu and Christian Mätzler worked on the programs for the refined analysis of IWV and ILW data, Francisco Navas Guzm took care on the TROWARA operation, Klemens Hocke wrote the paper and performed the trend analysis. 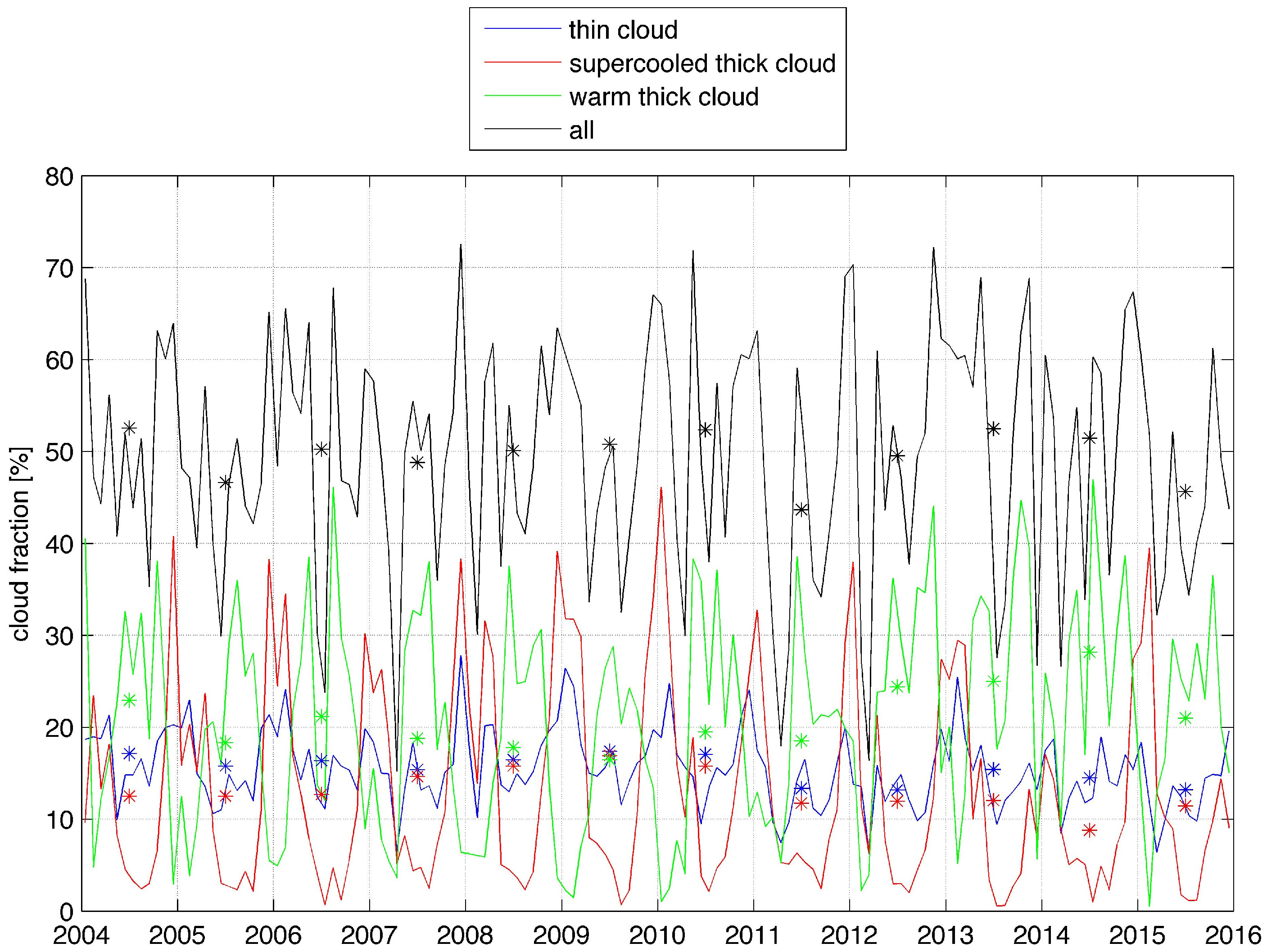 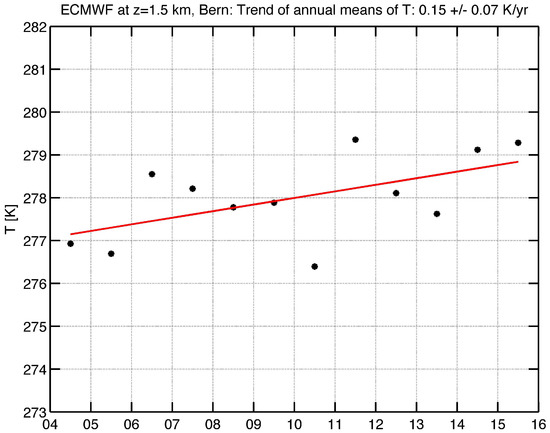 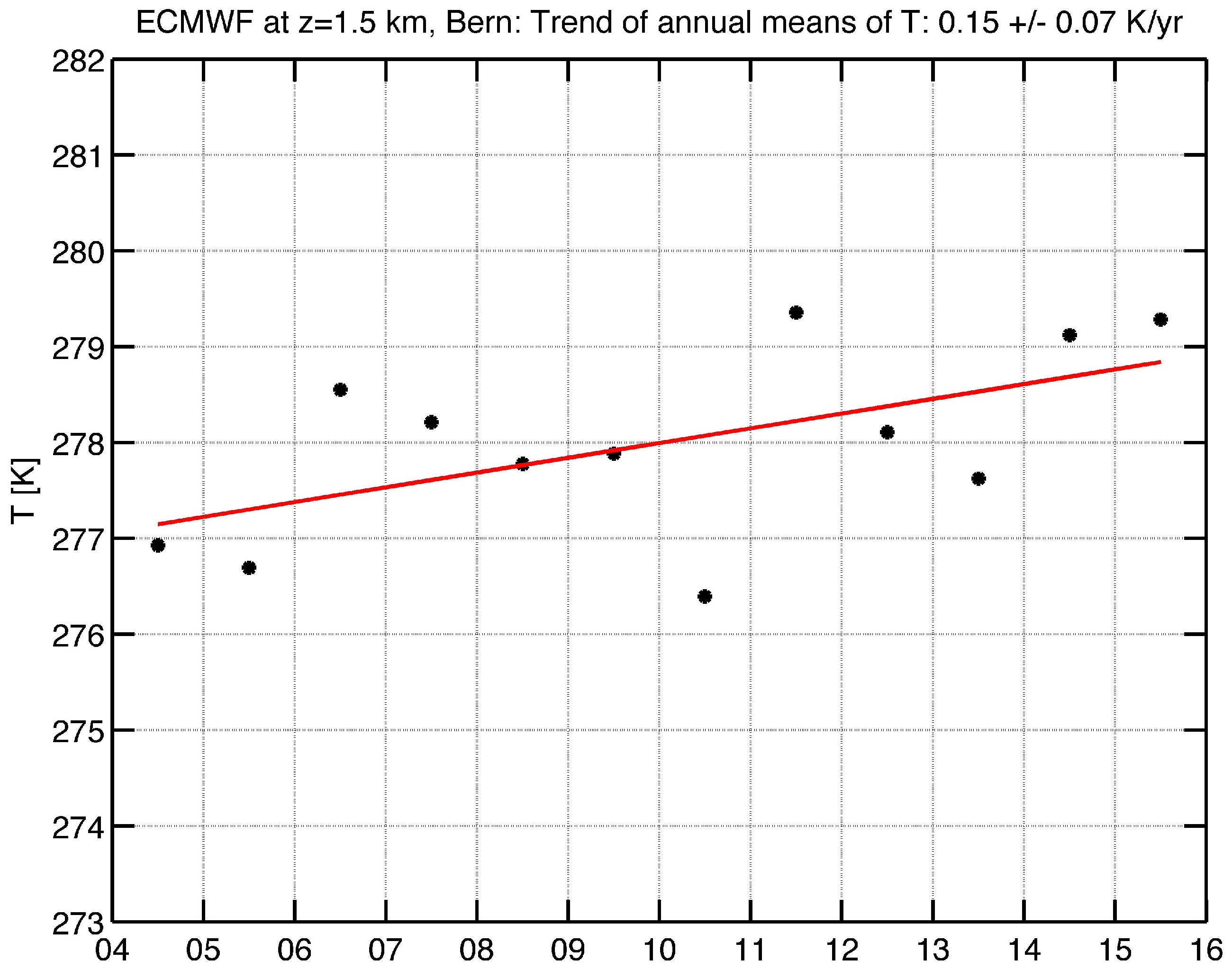 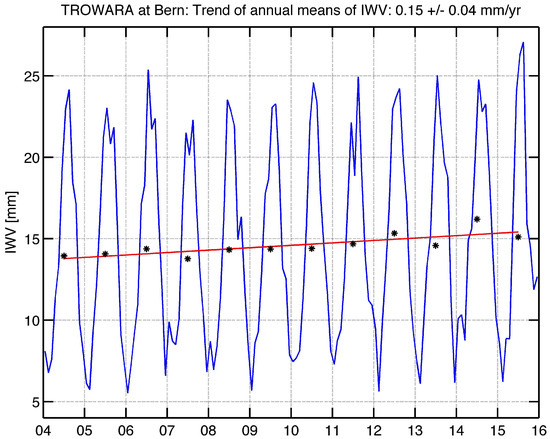 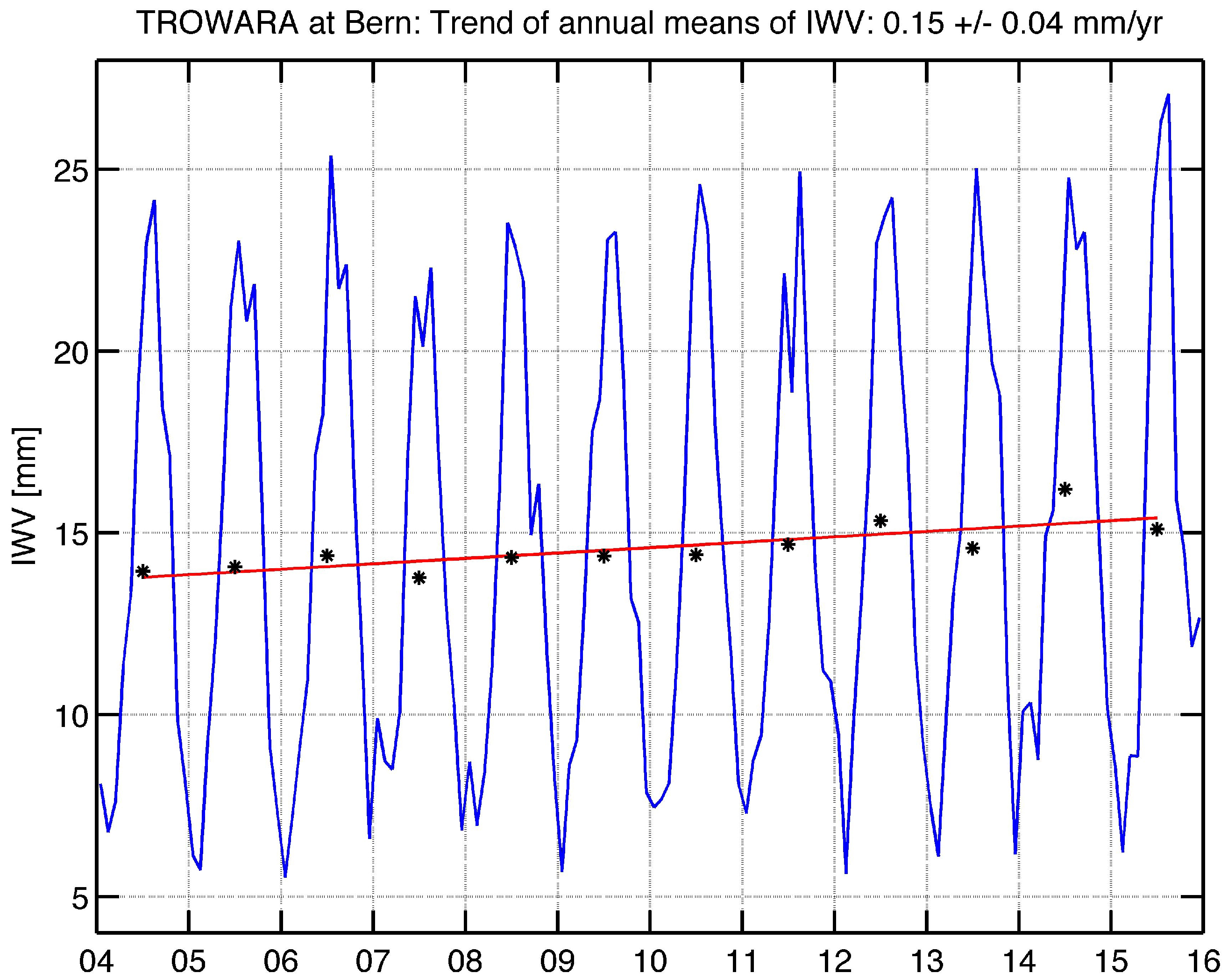 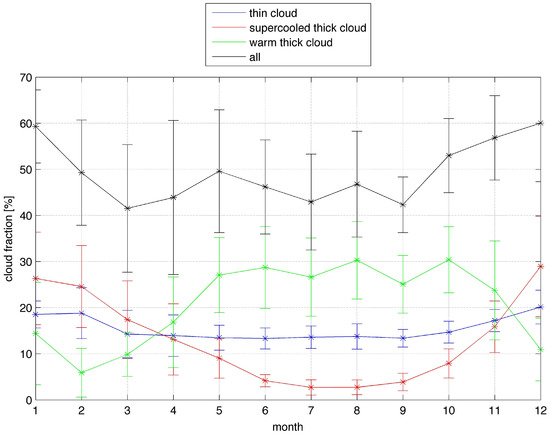 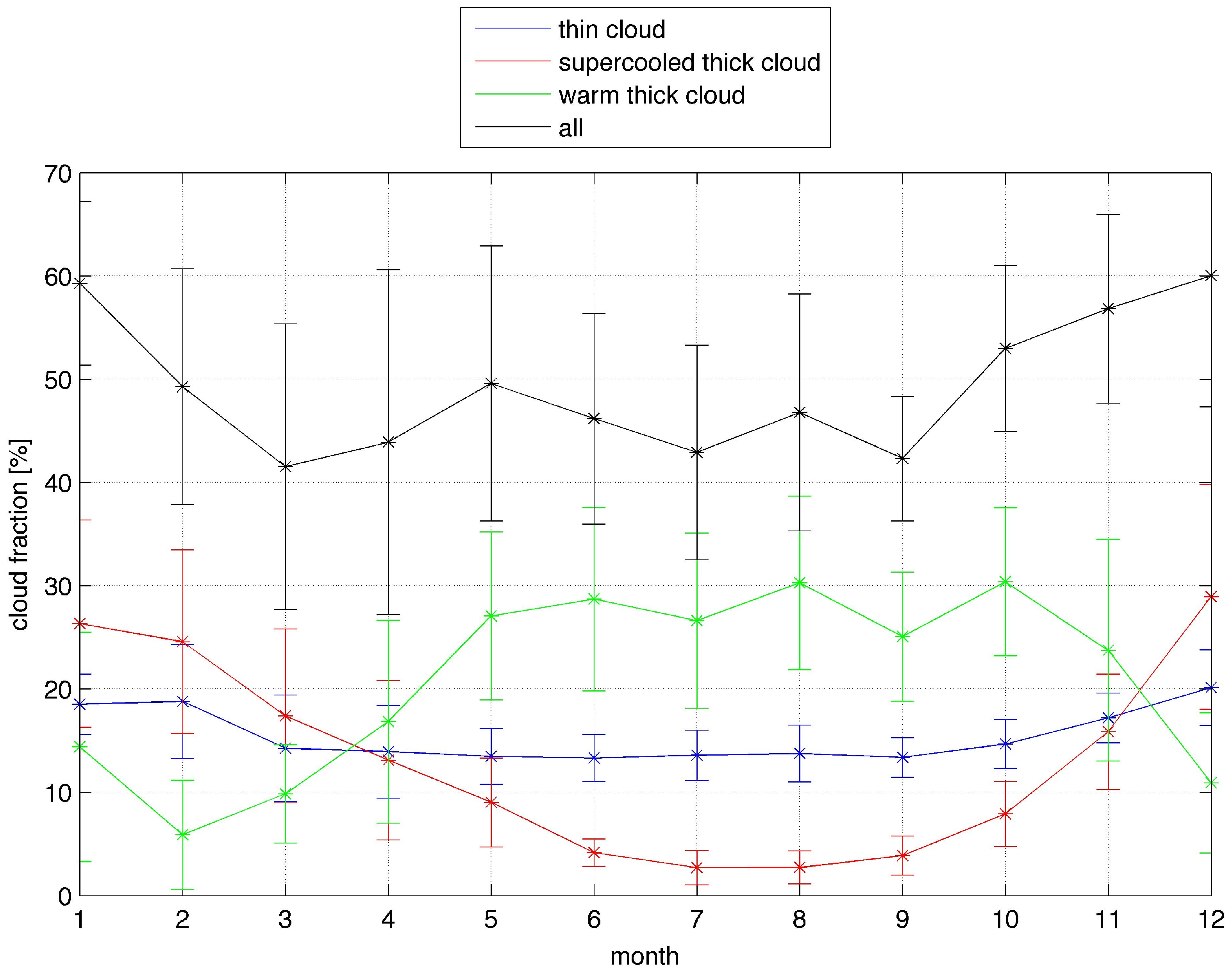 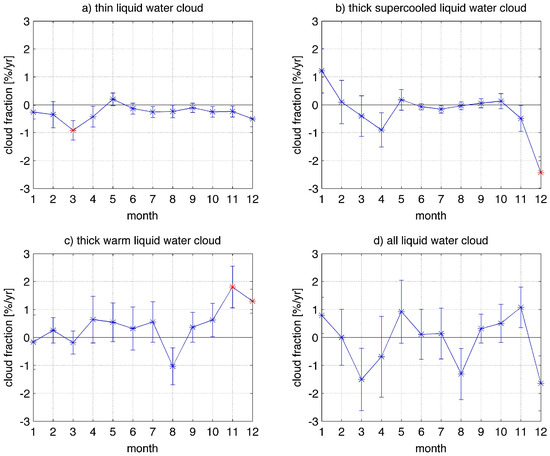 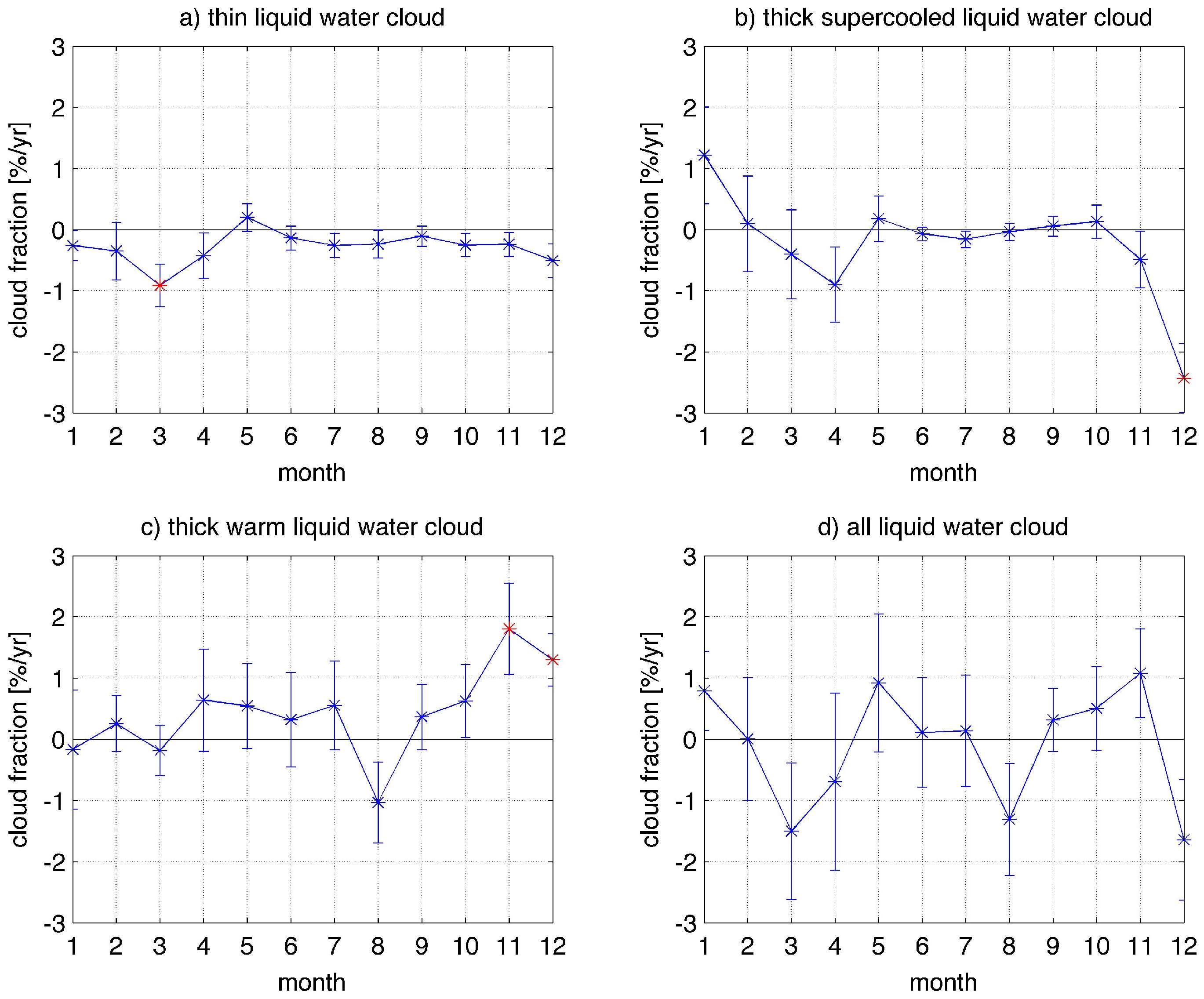 Table 1. Trends and their uncertainties for the monthly cloud fraction (CF) series from 2004 to 2015 and the four classes of liquid water clouds.