Decomposing the Bonferroni Inequality Index by Subgroups: Shapley Value and Balance of Inequality

Polarization and Rising Wage Inequality: Comparing the U.S. and Germany

Since the late 1970s, wage inequality has increased strongly both in the U.S. and Germany but the trends have been different. Wage inequality increased along the entire wage distribution during the 1980s in the U.S. and since the mid 1990s in Germany. There is evidence for wage polarization in the U.S. in the 1990s, and the increase in wage inequality in Germany was restricted to the top of the distribution before the 1990s. Using an approach developed by MaCurdy and Mroz (1995) to separate age, time, and cohort effects, we find a large role played by cohort effects in Germany, while we find only small cohort effects in the U.S. Employment trends in both countries are consistent with polarization since the 1990s. The evidence is consistent with a technology-driven polarization of the labor market, but this cannot explain the country specific differences. View Full-Text
Keywords: wage inequality; polarization; international comparison; cohort study; quantile regression wage inequality; polarization; international comparison; cohort study; quantile regression
►▼ Show Figures 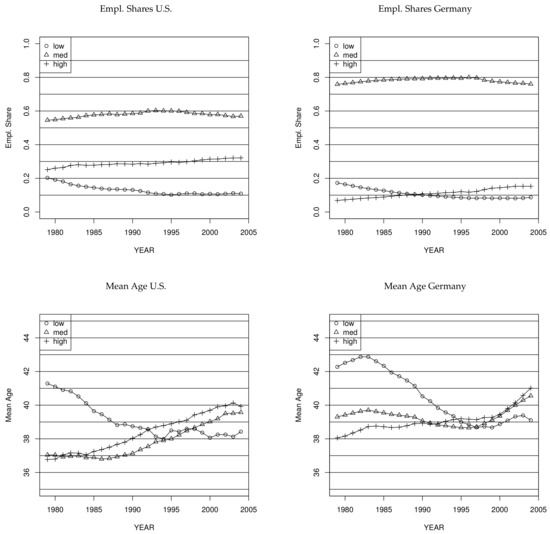