Dependence between Stock Returns of Italian Banks and the Sovereign Risk

During the recent financial crisis, a strong nexus between the financial sector and the sovereign credit risk has emerged worldwide. This potentially dangerous linkage is particularly pronounced in Europe, where banks—compared to the US or UK—are more important for providing liquidity to the economy and hold a much higher share of local government debt. The home bias is extreme for countries in the periphery, where in 2011 the holdings of sovereign bonds amounted to more than 15% of GDP (Merler and Pisan-Ferry 2011). While the vicious spiral in Ireland started with problems in the financial sector and the bailouts triggered the sovereign default risk, the country’s high debt-to-GDP ratio seems to be the starting point of the problems for Italian banks (Acharya et al. 2012).
The distinct and peculiar Italian circumstances require an accurate analysis of the linkage between the sovereign risk and the banking sector. First, in the past, Italian banks were much more focused on classical business and were less exposed to risky financial products. Therefore, before 2008 they had lower Credit default swap (shortly, CDS) spreads than banks from other European countries (Acharya et al. 2012). Second, the amount of wealth invested by Italian banks in government bonds of their own country (the so-called home bias) is historically higher than in any other troubled country (Merler and Pisan-Ferry 2011). Moreover, Italian banks used part of the cheap liquidity offered by the European Central Bank (ECB) via the two long-term refinancing operations (LTROs) to further increase their exposure in government bonds to more than 40% until May 2012 (Bank of Italy 2012). Therefore, their fate is particularly linked to the creditworthiness of the state. In fact, rising credit spreads cause direct losses in the treasury of the banks Angeloni and Wolff 2012; De Bruyckere et al. 2013, and they have an impact (although less evidently) on the net interest income (Albertazzi et al. 2014). Furthermore, an increase in the government yield induces higher interest rates on loans and a consequent decline in the lending volume of banks. In addition and more generally, higher sovereign credit spreads might be a signal that potential future bailouts become less affordable.
Since the beginning of the European government crisis in the years from 2011 to 2013, the main issue has been how to mitigate the systemic risk and how to ensure that the future probability of such a crisis reoccurring is reduced. In particular, the relationship between sovereigns and the banking industry is still at the center of academic attention, and various papers have investigated different aspects of this issue (e.g., Baglioni and Cherubini (2013); Delis and Mylonidis (2011); Kalbaska and Gatkowski (2012); Kohonen (2014); Reboredo and Ugolinia (2015a, 2015b); Xu et al. (2017)). The current paper addresses the following three research questions: (1) Is there a statistically significant dependence between the sovereign default risk and the stock returns of Italian banks, especially in the period 2011–2013? (2) Do large and small capitalized banks differ with respect to this relationship? (3) Is an increasing sovereign risk transferred through contagion to the equity returns of Italian banks? Compared to the literature, as a methodological contribution our investigation is mainly based on a two-step approach. First, we remove possible heteroscedasticity in the estimation of the time-varying dependence by using a parametric filtering procedure. Second, the research questions are answered by referring to the framework of (rank-invariant) association measures and tail dependence (Patton 2012).
The remainder of the paper is organized as follows: Section 2 provides a discussion on the meaning of the idiom financial contagion and an overview of the tools for investigating the interdependence between the government yield spread and stock returns of the banking sector in Italy during the years 2003–2015. Section 3 provides a detailed description of our empirical analysis. Section 4 concludes and provides a discussion on the financial and policy implications of the empirical findings.

2. What Financial Contagion Is, and How to Detect It

In Figure 5, we use a network representation to compare the dependence of pseudo-observations between changes in the yield spread and the returns of the single constituent Italian banks.6 The width of the lines shows the extent of the dependence, and the gray (respectively, black) color indicates a positive (respectively, negative) correlation.
It can be easily seen that during the first period there is basically no relationship between changes in the yield spread and the single banks. During the second period, a high negative correlation (shown by thick black lines) between changes in the yield spread and the single banks can be observed. Furthermore, compared to the first period, the correlation among the banks seems to increase considerably. In order to investigate the relationship between the dependence and the size of the banks, in Figure 6 we indicate the corresponding market capitalization (in billions). By ranking the Italian banks according to their market capitalization, it can be seen that especially during the crisis period, large capitalized banks are highly and negatively correlated to changes in the yield spread (see the Right Panel of Figure 5). This might also explain the high correlation among the large capitalized banks at the center of the network, while small capitalized banks in the outer regions seem to be less affected.
Despite the observed increased correlation in the second period, we are not able to detect a significant evidence of contagion from spread to banks in both periods (Figure 7, Upper Panels). Reverse causality has also been tested, since impaired interbank markets raised funding costs of all banks, and increased the expectations that governments have to bailout their indigenous banks. The contagion test procedure rejects this conjecture (Figure 7, Bottom Panels). Therefore, potential bi-directional contagious effects seem to be unlikely according to our methodology. 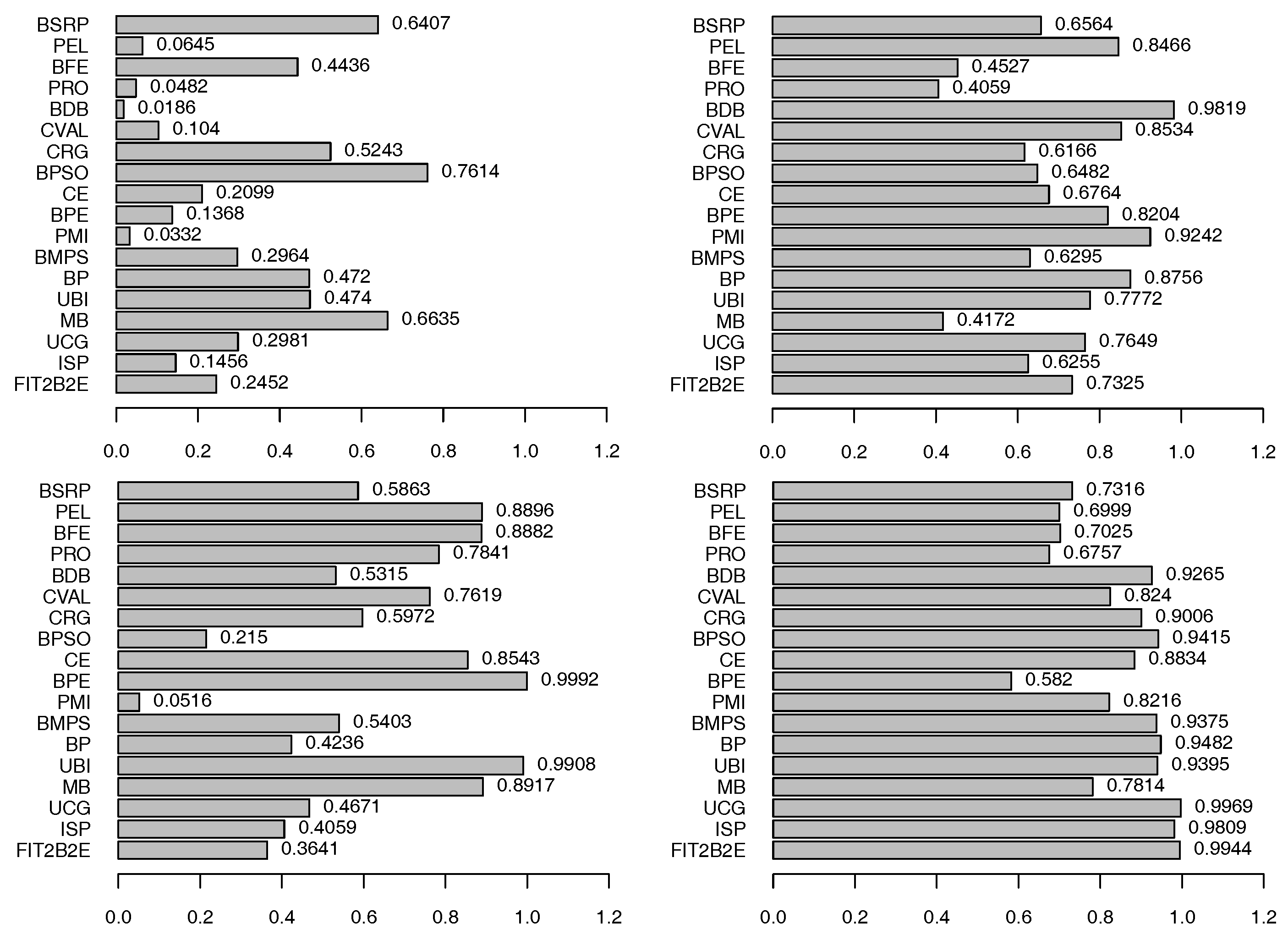 The two recent financial crises (the U.S. subprime mortgage crisis and the European Sovereign Debt Crisis) revealed significant deficiencies in both the analytical framework and the policymaker’s ability to mitigate emerging system-wide vulnerabilities. Macro-financial linkages have not been fully appreciated, and the transmission of risk across the financial systems has been severely underestimated. In the present paper, we propose a non-linear approach in order to measure the dependence between the sovereign credit spread and the stock returns of Italian banks. We find significant negative dependence starting from September 2008, but no contagion effects from the government yield spread to the banking system. As an interesting result, compared to small capitalized banks, during the second period large capitalized banks are highly and negatively correlated to changes in the yield spread. From the policymaker’s perspective, the proposed tools are useful in at least two ways: First, our method—which reduces the impact of arbitrary model choices—allows supervisors to monitor the banking system based on empirical evidence. Second, the insights of this exercise might be used to update necessary size-dependent capital buffers in response to an increased systematic risk in the market.

The authors are grateful to the referees for their valuable comments. A special thank to Ruggero Bertelli for his helpful suggestions on this paper. The second author acknowledges the support of Free University of Bozen-Bolzano via the projects “Handling High-Dimensional Systems in Economics” and “Financial Crisis Chronicles: Systemic Perspective and Econometric Issues (FINCH)”. The first and third author have been supported by Free University of Bozen-Bolzano via the project AIDA.

All authors contributed equally to the paper. 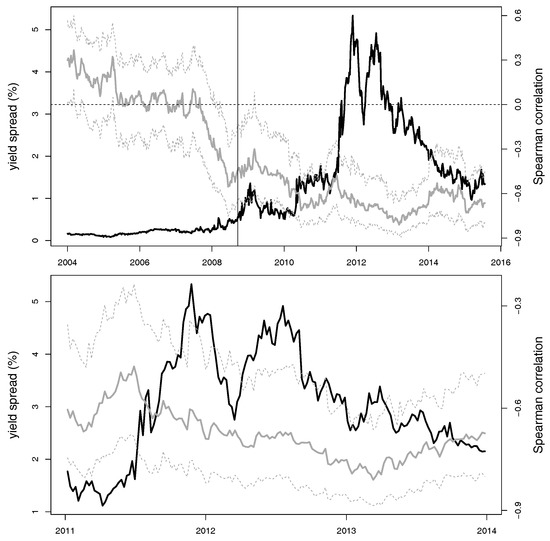 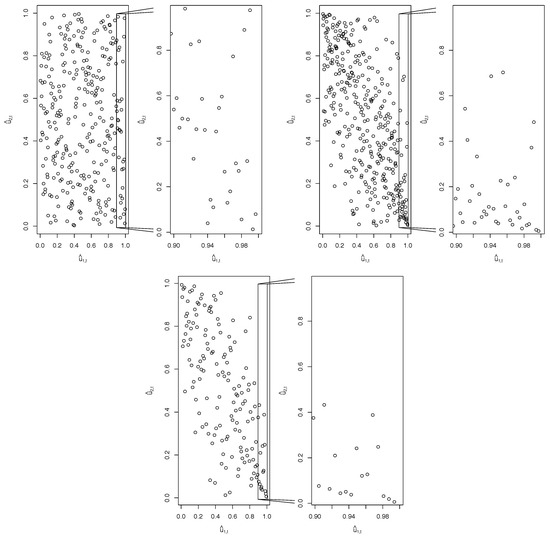