How to Develop IoT Cloud e-Health Systems Based on FIWARE: A Lesson Learnt

For the experiment, each of the single component activities to be predicted were performed five times in a non-uniform order. This allowed us to adequately test the approach’s capability to infer the correct activity, regardless of the order the activities were performed in. Both the TIS from the ceiling and from the side of the room were used for data capture. The thermal frames retrieved from both sensors during the performance of the activities were initially stored locally. This allowed for the opportunity to create a ground truth for each of the frames prior to processing and performance evaluation.
This ground truth was created by processing each frame one at a time, along with the pairing frame from the other TIS. The feature vectors for each frame in a pair were calculated, combined and stored. Each feature vector was then manually labelled with the action being performed, the object the person was near, if any, and the activity that was being performed, if any. This provided a ground truth state for each of the frames captured during the experiment. From each sensor, 586 frames were captured, making a total of 1172 thermal frames. There were, therefore, 586 feature vectors with a size of 28. Table 3 presents how many frames were labelled with each of the actions, objects and activities.
Once the ground truth was established, the accuracy of the system’s action, object and activity recognition could be tested. For each frame, from both TISs, the features were extracted and combined to be passed through the trained random forest model. This produced a prediction for the action being performed.
The proximity to objects within the room was also calculated to estimate whether the person was within distance of the known position of an object that could be used. The value for the object was determined as either, near fridge, near coffee cupboard, or near table. The activity was inferred from both the predicted action and object values, where it could have been one of four possible activities: opening/closing fridge, using fridge, using coffee cupboard or sitting at table.
When the predictions for each of the action, object and activity values were found, they were each compared with the pre-established ground truth for that given frame to determine whether the predictions were correct. Once each frame had been analysed, total recognition accuracy for each of the previously mentioned labels was calculated.

In this Section we present the accuracy of results achieved from training various machine learning models. The prediction rates for the action performed, the nearest object and the inferred activities from the conducted experiment are also broken down and evaluated.

As stated previously, for each pair of frames from the two thermal sensors processed, a prediction was made for the action, the object the person was near, and the single component activity being performed. Where S1 and S2 are the frames from the ceiling and side sensor, respectively, F is the feature vector, A is the predicted action, O is the nearest object and ADL is the inferred activity. The inference is displayed in Equations (1) and (2).
S1 + S2 = F = A
A + O = ADL
For the prediction of the performed action, a machine learning algorithm was required. Of the three models tested, the random forest model, in terms of training data accuracy, achieved the best results. In Table 4, the accuracies for the action training data achieved by each model are presented. These values are based on 10-fold cross-validation.
The models were then used in the experiment to analyse each frame and predict the action, detect the object proximity and infer the activity. The results for the three models are shown in Table 5.
The proximity accuracy does not change from model to model as it is not influenced by the approach of the chosen machine learning algorithm. The threshold to determine what is and what is not near is the only factor that plays a part in the proximity prediction. The activity prediction accuracy, therefore, varies from model to model only because the action accuracy does. It can be seen that the Quadratic SVM produces the lowest accuracy. Even though the activity accuracy achieved by the decision trees model is virtually identical to what is accomplished by the random forest, it is the improvement in the action prediction accuracy that made the random forest the best choice.

During the experiment there were features extracted from the shape of the person’s BLOB which were used to predict the action the person was performing for that given frame. The results of these predictions for each of the seven action classes are presented in Table 6. The Rside action appears to be the worst performing action and has a poor recognition rate. This is inverted with regards to the Lside action as it was predicted correctly every time it was performed. A 100% prediction rate was almost achieved with the bend action as well as the arms down action. This differentiation between bend and arms down was made possible with the side sensor. This extra sensor data alleviated the burden on the ceiling sensor to detect differences between the two actions, resulting in the two actions rarely being confused with one another.
The low performance of Rside was reiterated again by the generated confusion matrix for the actions in Table 7. In this table, the row shows the true action and each column shows the action that was predicted. The rows show the actual number of instances for each action. The columns show the number of times each action was predicted, either correctly or incorrectly.
It can be hypothesised that the Rside performance was low due to the occlusion of the right arm from the side sensor. Throughout the experiment the right and left arms were only ever extended out to the side when the fridge or coffee cupboard was being opened. Due to the position of the side TIS, the right arm was more likely to be occluded by the person’s body, leaving the classification to only the ceiling TIS. This could be addressed by capturing further frames of the Rside action being performed to better train the ceiling sensor to classify this action on its own. The ceiling sensor may have also struggled with the Rside action at the fridge as the fridge was quite low to the ground, meaning the right arm was not required to extend to the side particularly far. The inference of the activity did not suffer too much from this as almost half of the misclassified Rside actions were classified as the Lside action, which resulted in the same activity being inferred anyway.

The person’s distance from each object’s proximity points was calculated to determine the object the person was closest to if they were within the specified threshold. The results for each object are shown in Table 8.
The confusion matrix for the proximity detections that were produced from the experiment is displayed in Table 9 and shows how the None label was the main reason for the lowered accuracy value. The person was frequently detected as being near the objects when, actually, they were not near any of them. This, however, did not affect the accuracy of the activity inference as the proximity detection for the three objects was almost 100% accurate any time the person was actually near one of them.

From both the performed action and the nearest object to the person, the activity, if any, was inferred. The results for the prediction of the performed activity within each frame are presented in Table 10.
As stated, it was the results from the action classification and proximity detection from which the activities were classified. The slightly lower proximity detection accuracy did not have any significantly detrimental effect on the activity accuracy. This was most likely because the misclassifications of the nearest object were caused by the person walking past an object, as opposed to using it, and being predicted as near another. The low detection rate for the Rside action also did not show any significant negative effects on the activity accuracy. The confusion matrix for the activity predictions is presented in Table 11.

This research was supported through a Northern Ireland Department for the Economy (DfE) PhD scholarship. 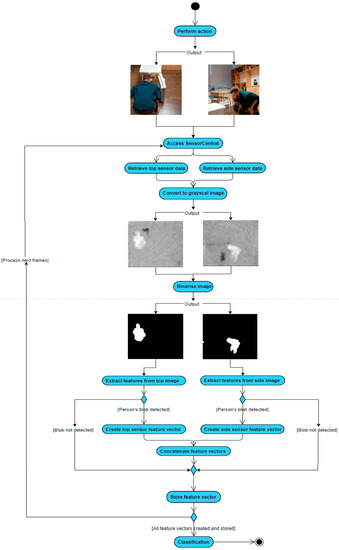 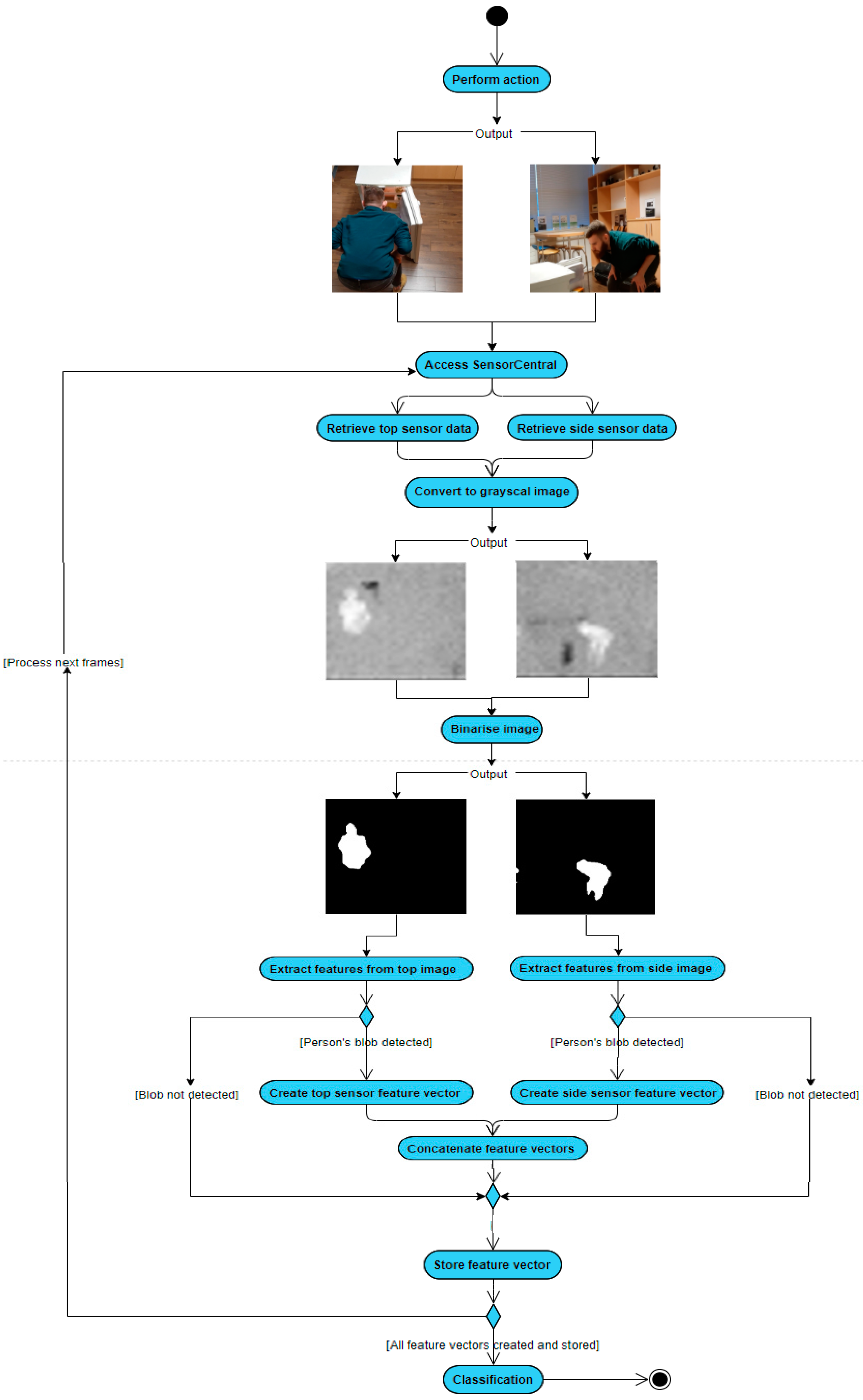 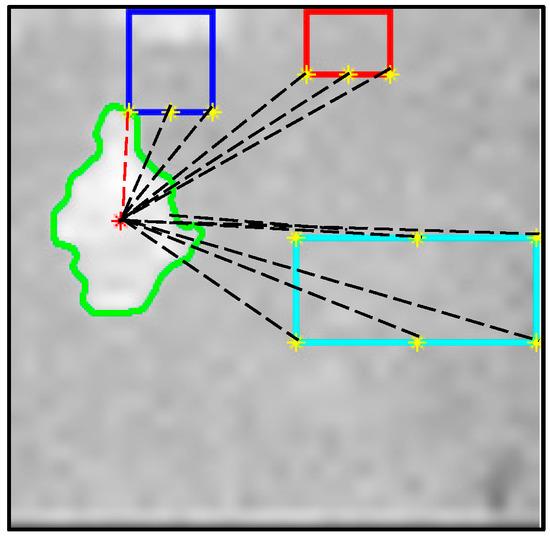 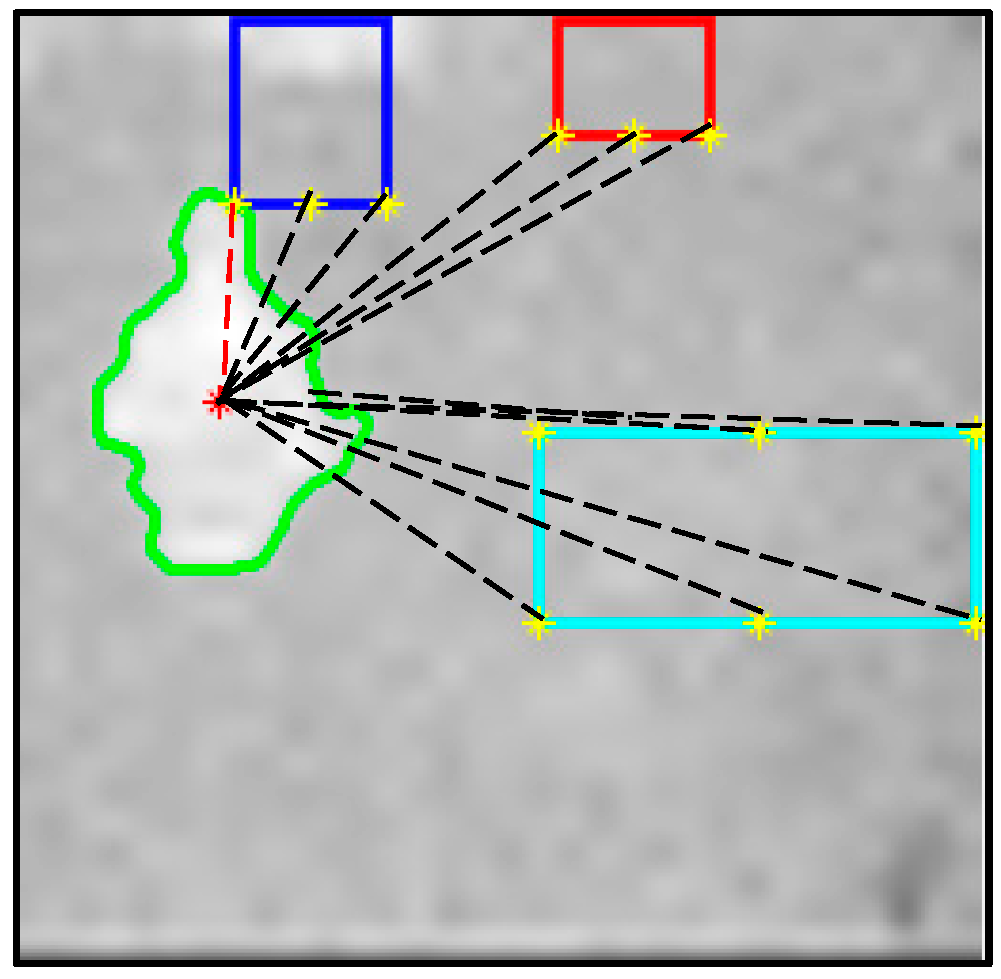 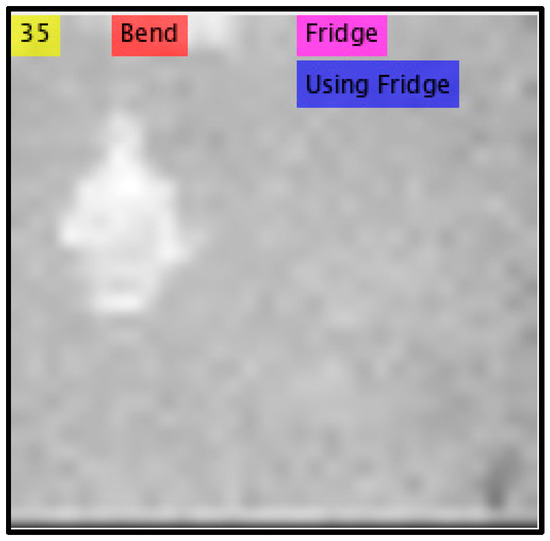