Long-Term Evolution (LTE) and its improvement, Long-Term Evolution-Advanced (LTE-A), are attractive choices for Machine-to-Machine (M2M) communication due to their ubiquitous coverage and high bandwidth. However, the focus of LTE design was high performance connection-based communications between human-operated devices (also known as human-to-human, or H2H traffic), which was initially established over the Physical Random Access Channel (PRACH). On the other hand, M2M traffic is mostly based on contention-based transmission of short messages and does not need connection establishment. As a result, M2M traffic transmitted over LTE PRACH has to use the inefficient four-way handshake and compete for resources with H2H traffic. When a large number of M2M devices attempts to access the PRACH, an outage condition may occur; furthermore, traffic prioritization is regulated only through age-based power ramping, which drives the network even faster towards the outage condition. In this article, we describe an overlay network that allows a massive number of M2M devices to coexist with H2H traffic and access the network without going through the full LTE handshake. The overlay network is patterned after IEEE 802.15.6 to support multiple priority classes of M2M traffic. We analyse the performance of the joint M2M and H2H system and investigate the trade-offs needed to keep satisfactory performance and reliability for M2M traffic in the presence of H2H traffic of known intensity. Our results confirm the validity of this approach for applications in crowd sensing, monitoring and others utilized in smart city development. View Full-Text
Keywords: LTE; RACH; PRACH; IEEE 802.15.4; IEEE 802.15.6; non-saturation operating regime; backoff error; smart city LTE; RACH; PRACH; IEEE 802.15.4; IEEE 802.15.6; non-saturation operating regime; backoff error; smart city
►▼ Show Figures 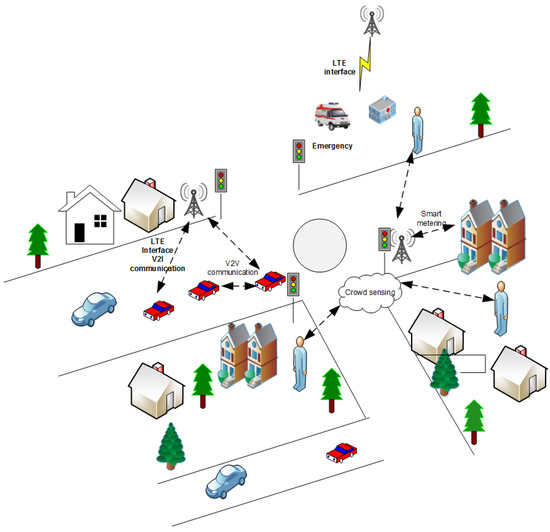