Virtual Replication of IoT Hubs in the Cloud: A Flexible Approach to Smart Object Management

In future years, the Internet of Things is expected to interconnect billions of highly heterogeneous devices, denoted as “smart objects”, enabling the development of innovative distributed applications. Smart objects are constrained sensor/actuator-equipped devices, in terms of computational power and available memory. In order to cope with the diverse physical connectivity technologies of smart objects, the Internet Protocol is foreseen as the common “language” for full interoperability and as a unifying factor for integration with the Internet. Large-scale platforms for interconnected devices are required to effectively manage resources provided by smart objects. In this work, we present a novel architecture for the management of large numbers of resources in a scalable, seamless, and secure way. The proposed architecture is based on a network element, denoted as IoT Hub, placed at the border of the constrained network, which implements the following functions: service discovery; border router; HTTP/Constrained Application Protocol (CoAP) and CoAP/CoAP proxy; cache; and resource directory. In order to protect smart objects (which cannot, because of their constrained nature, serve a large number of concurrent requests) and the IoT Hub (which serves as a gateway to the constrained network), we introduce the concept of virtual IoT Hub replica: a Cloud-based “entity” replicating all the functions of a physical IoT Hub, which external clients will query to access resources. IoT Hub replicas are constantly synchronized with the physical IoT Hub through a low-overhead protocol based on Message Queue Telemetry Transport (MQTT). An experimental evaluation, proving the feasibility and advantages of the proposed architecture, is presented. View Full-Text
Keywords: Internet of Things; edge computing; cloud computing Internet of Things; edge computing; cloud computing
►▼ Show Figures 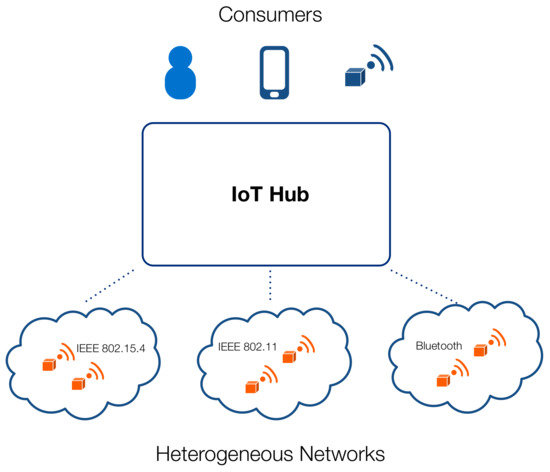