RUST: A Robust, User-Friendly Script Tool for Rapid Measurement of Rust Disease on Cereal Leaves
Next Article in Special Issue

Fertilizer-use efficiency is one of the most critical concerns in rice cultivation to reduce N losses, increase yields, and improve crop management. The effects of a new polymeric-coated controlled-release fertilizer (CRF) were compared to those of other slow-release and traditional fertilizers in a microscale experiment, which was carried out in cuvettes under partly controlled ambient conditions, and a large-scale field experiment. To evaluate the fertilizer’s efficiency, nitrogen and water-use efficiency were calculated using the measurement of different photosynthetic and crop yield parameters. Improved responses regarding some of the analyzed physiological and growth parameters were observed for those plants fertilized with the new CRF. In the microscale experiment, significantly increased yields (ca. 35%) were produced in the plants treated with CRF as compared to traditional fertilizer. These results were in accordance with ca. 24% significant increased levels of N in leaves of CRF-treated plants, besides increased P, Fe, Mn, and cytokinin contents. At the field scale, similar yields were obtained with the slow-release or traditional fertilizers and CRF at a 20% reduced N dose. The new controlled-release fertilizer is a urea-based fertilizer coated with lignosulfonates, which is cheaply produced from the waste of pulp and wood industries, containing humic acids as biostimulants. In conclusion, CRF is recommended to facilitate rice crop management and to reduce contamination, as it can be formulated with lower N doses and because it is ecological manufacturing. View Full-Text
Keywords: controlled-release fertilizer; humic acid; lignosulfonate; natural polymers; Oryza sativa controlled-release fertilizer; humic acid; lignosulfonate; natural polymers; Oryza sativa
►▼ Show Figures 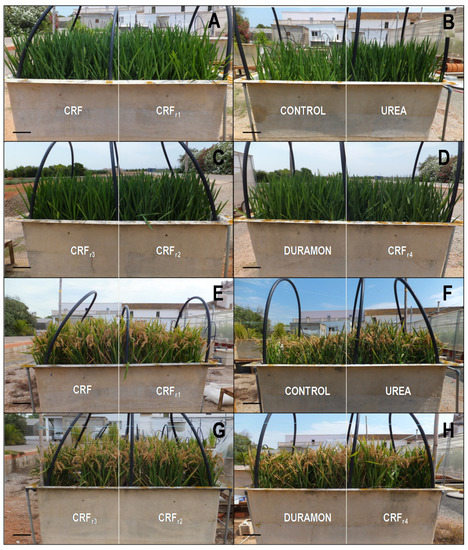