Flavonoids and Isoflavonoids Biosynthesis in the Model Legume Lotus japonicus; Connections to Nitrogen Metabolism and Photorespiration

Phenylpropanoid metabolism represents an important metabolic pathway from which originates a wide number of secondary metabolites derived from phenylalanine or tyrosine, such as flavonoids and isoflavonoids, crucial molecules in plants implicated in a large number of biological processes. Therefore, various types of interconnection exist between different aspects of nitrogen metabolism and the biosynthesis of these compounds. For legumes, flavonoids and isoflavonoids are postulated to play pivotal roles in adaptation to their biological environments, both as defensive compounds (phytoalexins) and as chemical signals in symbiotic nitrogen fixation with rhizobia. In this paper, we summarize the recent progress made in the characterization of flavonoid and isoflavonoid biosynthetic pathways in the model legume Lotus japonicus (Regel) Larsen under different abiotic stress situations, such as drought, the impairment of photorespiration and UV-B irradiation. Emphasis is placed on results obtained using photorespiratory mutants deficient in glutamine synthetase. The results provide different types of evidence showing that an enhancement of isoflavonoid compared to standard flavonol metabolism frequently occurs in Lotus under abiotic stress conditions. The advance produced in the analysis of isoflavonoid regulatory proteins by the use of co-expression networks, particularly MYB transcription factors, is also described. The results obtained in Lotus japonicus plants can be also extrapolated to other cultivated legume species, such as soybean, of extraordinary agronomic importance with a high impact in feeding, oil production and human health.
Keywords: flavonoids; isoflavonoids; phenolics; legumes flavonoids; isoflavonoids; phenolics; legumes

5. The Importance of Isoflavonoid Biosynthesis in Soybean: Use of the Knowledge Obtained in the Model Legume Lotus japonicus for the Genetic Improvement of Soybean

Particularly important is the transfer of knowledge obtained with the model species L. japonicus to a cultivated legume of great economic importance such as soybean. Both legumes have the same type of determinate nodules and genomes with a high degree of synteny [38]. Soybean orthologous genes corresponding to the promising LjMYB genes found in L. japonicus would be identified and further studied. The positive regulator of soybean isoflavones biosynthesis GmMYB29 was found to form a cluster with the L. japonicus isoflavonoid regulator LjMYB14 [143]. Mutant collections are being screened in order to develop new commercial soybean varieties [144]. Some positive [143,145,146,147,148,149] or negative [150,151] regulators of isoflavonoid biosynthesis in soybean have already been found; however, there are still many aspects and actors of the regulation of this pathway that have to be discovered. We expect that the advancement produced with the model legume L. japonicus will help to make progress in the understanding of isoflavonoid biosynthesis regulation in soybean. This is particularly important considering the beneficial effects of soybean isoflavonoids (isoflavones) on human health, including the prevention of different types of cancer and of cardiovascular diseases [143]. While several efforts are being made in order to obtain soybean varieties with high isoflavonoid content, in some cases a high content of isoflavonoids is not desirable, such as in the case of the soy beans used for infant nutrition formulas, where the estrogenic effect of isoflavonoids may have adverse health effects on the infant development [152]. For these reasons, it is important to obtain new soybean varieties with either increased or decreased content of isoflavonoids, and, in order to do that, it is fundamental to identify all the factors that regulate the biosynthetic pathway of these compounds. In the case of mutants affected in negative regulators, high isoflavonoid content should be observed, while in the case of positive regulators, low isoflavonoid content is expected, and both types of mutants should be of interest. The fact that soybean represents more than 50% of the production of oilseed legumes worldwide [153] together with its importance for human nutrition and health [154,155] make the study of isoflavonoid biosynthesis in soybean of extreme interest. A further interest in the study of MYB mutants in soybean comes from the fact that the knockout of some of these factors can result in increased tolerance to abiotic stresses such as cold [156] or drought [157]. The current authors are actually working on the characterization of specific mutants of the LjMYB13 and LjMYB15 genes in order to figure out their possible role in the regulation of isoflavonoid biosynthesis and/or response to stress [79]. The LjMYB15 gene was interconnected to isoflavonoid pathway genes as described above (Figure 3) and, in a phylogenetic analysis, the LjMYB13 gene was shown that was in the same clade than LjMYB15 and other well-known genes that are part of the abiotic stress response in plants [103,143], as well as with genes involved in the regulation of isoflavonoid biosynthesis such as LjMYB14 and GmMYB29 [103,143]. A function in isoflavonoid regulation was proposed for LjMYB15 but not demonstrated [103]. In the case of the Arabidopsis homologs of LjMYB13 and LjMYB15, their involvement in the response to drought was demonstrated [158,159].
It has been also recently shown that a R2R3-type MYB transcription factor gene from soybean, GmMYB12, is involved in flavonoid accumulation and abiotic stress tolerance in transgenic Arabidopsis [160]. Interestingly, the authors propose that the higher tolerance to abiotic stress was produced by regulating osmotic balance (increased proline accumulation), together with other factors such as protecting membrane integrity and maintaining ROS homeostasis. Our previous works have also shown that all these factors may be also related with (iso)flavonoid biosynthesis under abiotic stress in a model legume such as L. japonicus ([61], and references therein). The research with model legume species improves our knowledge of cultivated legumes, but this is also true vice versa. For example, in a recent report, LjG6DT, the enzyme that catalyzes the prenylation of isoflavonoids in L. japonicus [161], was discovered thanks to the knowledge previously obtained about isoflavonoid prenylation in soybean. Studies with both cultivated and model species are not mutually exclusive but rather they complement each other, like in the case of L. japonicus and soybean.

This paper summarizes recent advances made in flavonoid and isoflavonoid research in the model legume L. japonicus. The study of the response of L. japonicus to abiotic stress conditions led to different novel findings, such as the accumulation of new flavonols that were described for the first time in L. japonicus leaves [62] and of a peculiar pattern of isoflavonoid accumulation in the response of this plant to UV-B irradiation [42]. Despite the fact that flavonoid and isoflavonoid metabolism is a very active field of research; several aspects of these pathways are far from having been completely described. Technical advances in metabolomics are enabling the discovery of a growing number of flavonoids and isoflavonoids structures. However, chemical modification of the flavonoid/isoflavonoid scaffolds, such as glycosylation and acylation, add another layer of complexity to their chemical diversity; and the reason beyond such complexity is still not completely understood. Legumes also use flavonoids or isoflavonoids in order to attract their chosen symbiont in a species-specific way. Despite the important role played by L. japonicus in elucidating the molecular genetics of legume–rhizobia symbiosis, it is still unknown which class of phenolic compounds are used by this species in order to attract its chosen symbiont [15]. Studies of the symbiotic capacity of specific L. japonicus mutants impaired in specific branches of the biosynthesis of phenolic compounds, paired with metabolite profiling will be needed in order to fill this gap. The regulation of isoflavonoid metabolism is also far from being completely understood. A few negative and positive regulators have been identified in soybean, while no clear isoflavonoid regulators have been identified in L. japonicus to date. The co-expression analysis presented in this paper identified potential candidates for isoflavonoid regulation in L. japonicus. Future works should be aimed to the characterization of specific mutants in these genes in order to understand whether they are involved in isoflavonoid regulation, and also if they may play a role in the response to different kinds of abiotic stress. A deeper understanding of isoflavonoid regulation may also permit tackling the genetic improvement of soybean and to breed varieties with either increased or decreased isoflavonoid content, two opposite traits that can be desirable depending on the products that will be manufactured using these soya beans. Since most of the regulators identified in these species are from the MYB transcription factor family, which is composed of a very high number of genes, traditional approaches, such as searching for isoflavonoid-related QTL, may be very time consuming. Bioinformatics approaches, such as the construction and analysis of gene co-expression networks in order to find new candidate regulators, combined with validation of these genes by characterizing loss-of–function mutants, have already showed promising results. Finally, as explained in this review, in order to broaden the knowledge of flavonoid and isoflavonoid metabolism and regulation, studies that take into consideration both model species such as L. japonicus, of easier genetic manipulation, and cultivated species of great economic importance, such as soybean, will be of paramount impact for legume flavonoid/isoflavonoid research.

The following are available online at https://www.mdpi.com/2223-7747/9/6/774/s1, Table S1: Overview of the names and chemical structures of relevant compounds referred to this review. Table S2: List of genes related to flavonoid and isoflavonoid pathways in Lotus japonicus.

The authors thank administrative and technical support given by B. Cantalapiedra and M.J. Cubas, respectively. 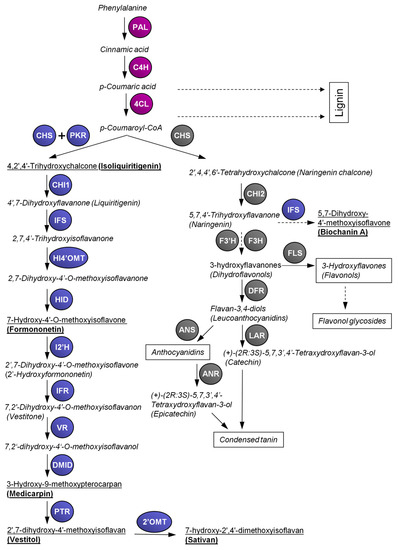 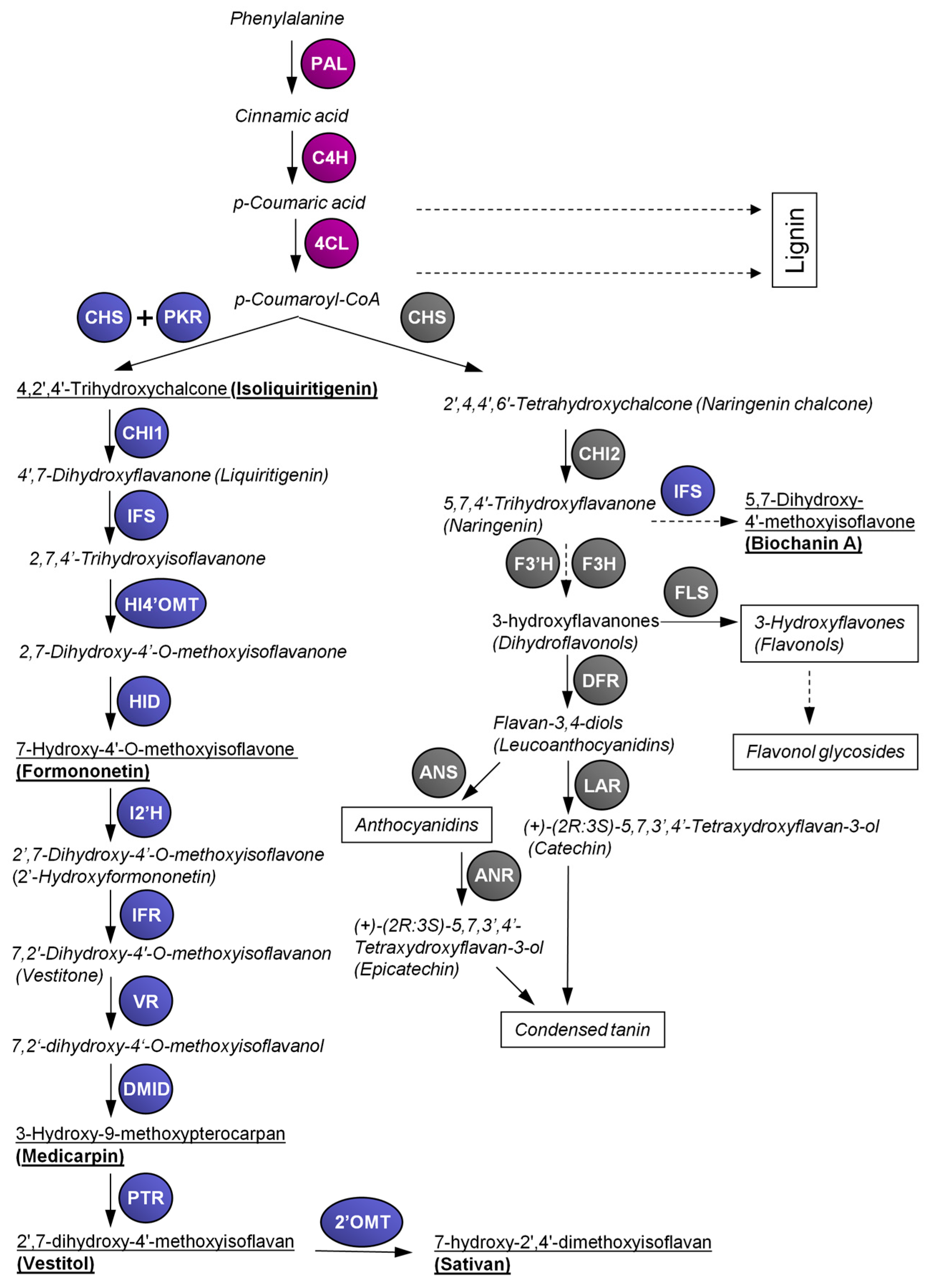 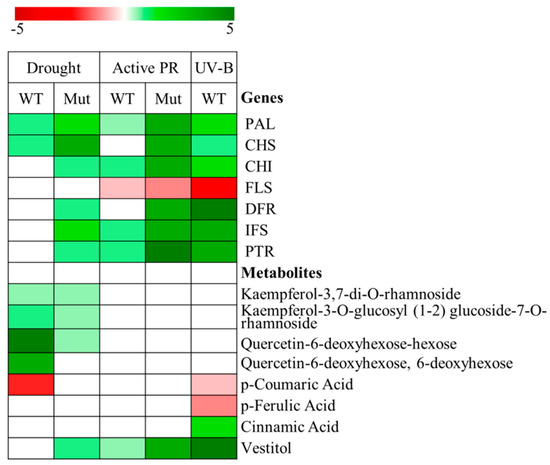 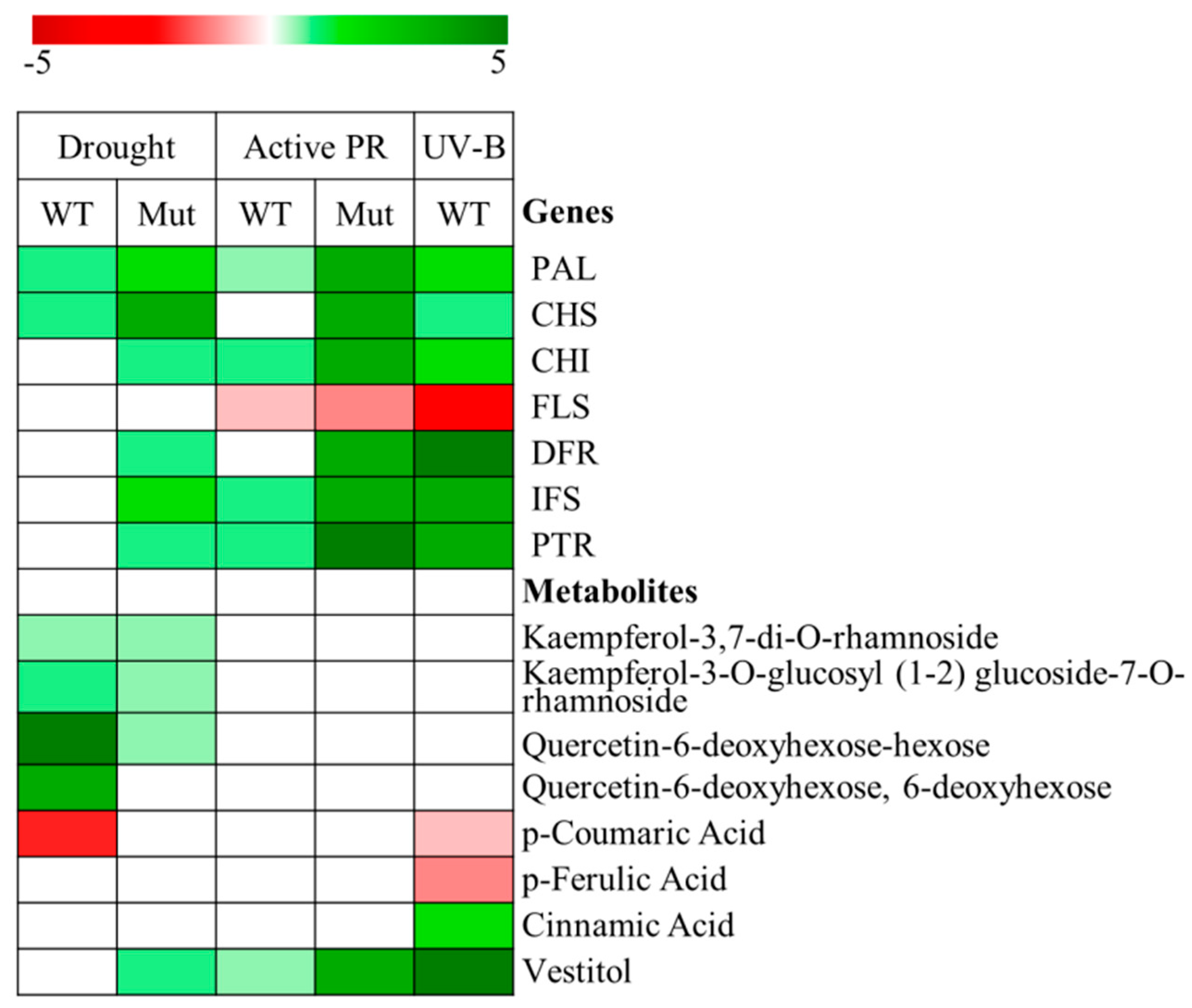 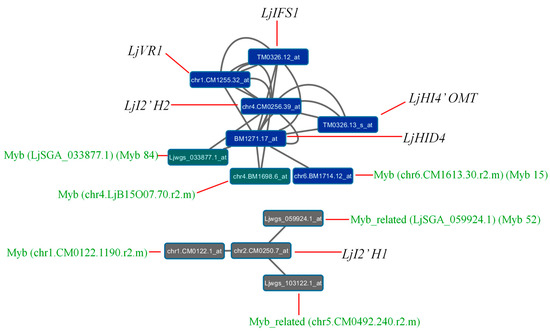 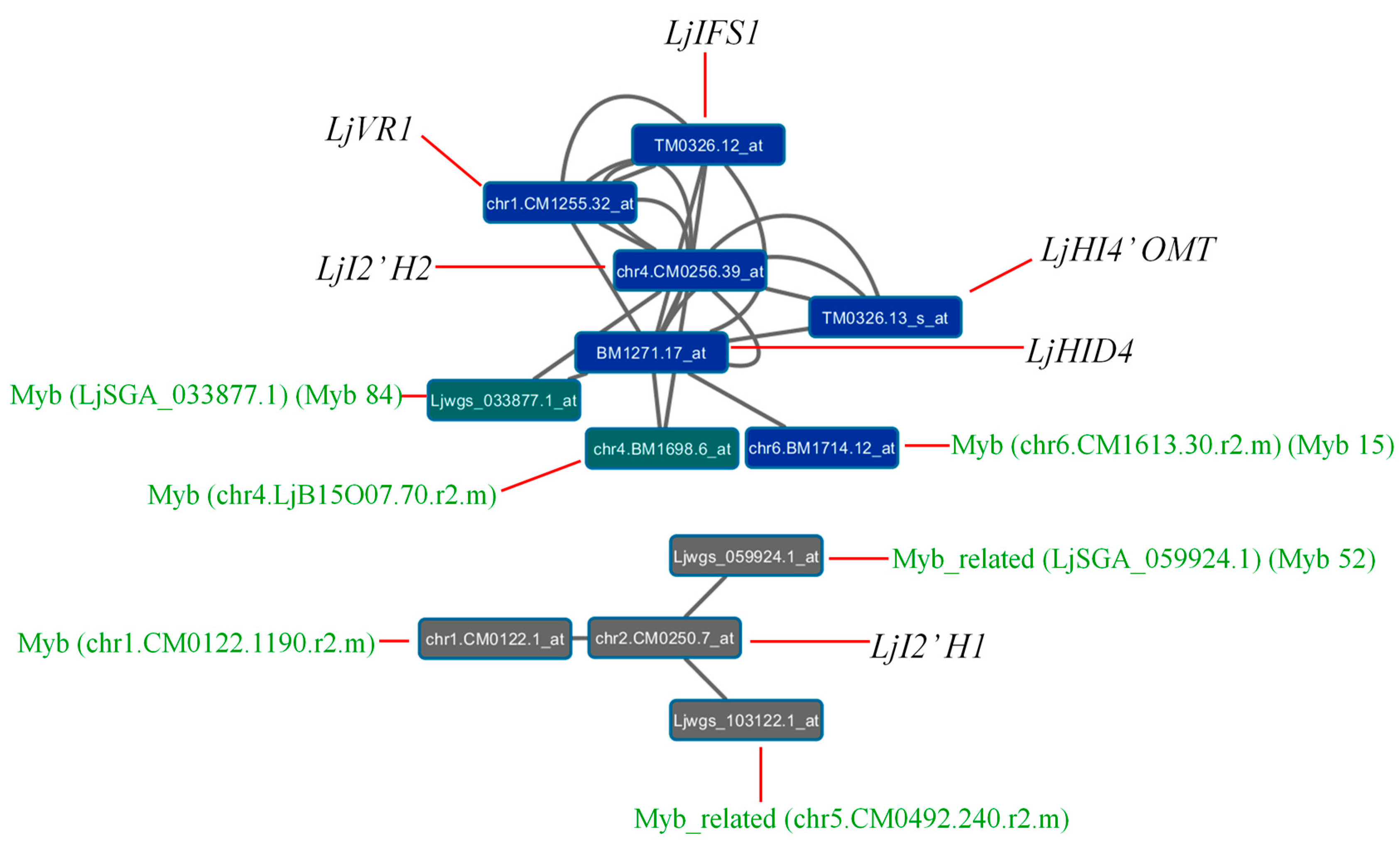