Flavonoids and Isoflavonoids Biosynthesis in the Model Legume Lotus japonicus; Connections to Nitrogen Metabolism and Photorespiration
Previous Article in Journal

Nitrate and ammonium are the main forms of inorganic nitrogen available to plants. The present study aimed to investigate the metabolic changes caused by ammonium and nitrate nutrition in maritime pine (Pinus pinaster Ait.). Seedlings were grown with five solutions containing different proportions of nitrate and ammonium. Their nitrogen status was characterized through analyses of their biomass, different biochemical and molecular markers as well as a metabolite profile using 1H-NMR. Ammonium-fed seedlings exhibited higher biomass than nitrate-fed-seedlings. Nitrate mainly accumulated in the stem and ammonium in the roots. Needles of ammonium-fed seedlings had higher nitrogen and amino acid contents but lower levels of enzyme activities related to nitrogen metabolism. Higher amounts of soluble sugars and L-arginine were found in the roots of ammonium-fed seedlings. In contrast, L-asparagine accumulated in the roots of nitrate-fed seedlings. The differences in the allocation of nitrate and ammonium may function as metabolic buffers to prevent interference with the metabolism of photosynthetic organs. The metabolite profiles observed in the roots suggest problems with carbon and nitrogen assimilation in nitrate-supplied seedlings. Taken together, this new knowledge contributes not only to a better understanding of nitrogen metabolism but also to improving aspects of applied mineral nutrition for conifers. View Full-Text
Keywords: Pinus pinaster; nutrition; nitrate; ammonium; nitrogen use efficiency (NUE) Pinus pinaster; nutrition; nitrate; ammonium; nitrogen use efficiency (NUE)
►▼ Show Figures 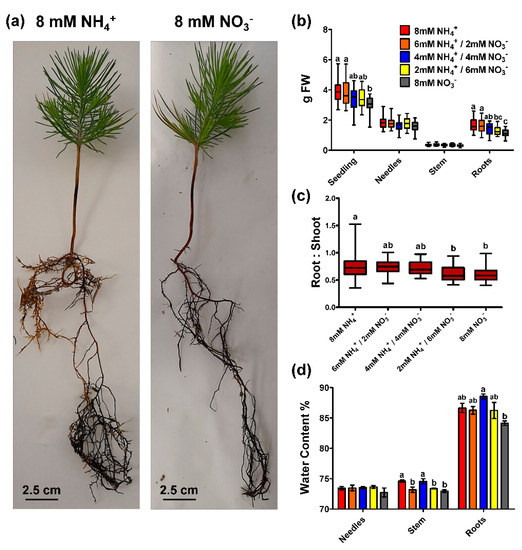