Evaluation of Allelopathic Activity of Chinese Medicinal Plants and Identification of Shikimic Acid as an Allelochemical from Illicium verum Hook. f.
Previous Article in Journal

Site-specific weed management and selective application of herbicides as eco-friendly techniques are still challenging tasks to perform, especially for densely cultivated crops, such as rice. This study is aimed at developing a stereo vision system for distinguishing between rice plants and weeds and further discriminating two types of weeds in a rice field by using artificial neural networks (ANNs) and two metaheuristic algorithms. For this purpose, stereo videos were recorded across the rice field and different channels were extracted and decomposed into the constituent frames. Next, upon pre-processing and segmentation of the frames, green plants were extracted out of the background. For accurate discrimination of the rice and weeds, a total of 302 color, shape, and texture features were identified. Two metaheuristic algorithms, namely particle swarm optimization (PSO) and the bee algorithm (BA), were used to optimize the neural network for selecting the most effective features and classifying different types of weeds, respectively. Comparing the proposed classification method with the K-nearest neighbors (KNN) classifier, it was found that the proposed ANN-BA classifier reached accuracies of 88.74% and 87.96% for right and left channels, respectively, over the test set. Taking into account either the arithmetic or the geometric means as the basis, the accuracies were increased up to 92.02% and 90.7%, respectively, over the test set. On the other hand, the KNN suffered from more cases of misclassification, as compared to the proposed ANN-BA classifier, generating an overall accuracy of 76.62% and 85.59% for the classification of the right and left channel data, respectively, and 85.84% and 84.07% for the arithmetic and geometric mean values, respectively. View Full-Text
Keywords: sustainable agriculture; site-specific management; eco-friendly technique; weed; rice field; metaheuristic algorithm sustainable agriculture; site-specific management; eco-friendly technique; weed; rice field; metaheuristic algorithm
►▼ Show Figures 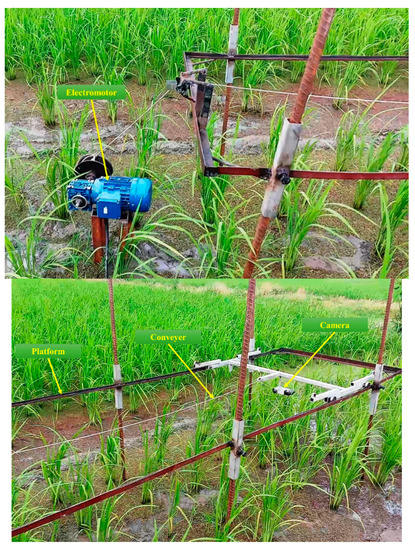