The First Case of Glyphosate Resistance in Johnsongrass (Sorghum halepense (L.) Pers.) in Europe
Next Article in Special Issue

The implication of enzymatic and non-enzymatic antioxidative systems in response to Ni was evaluated in the halophyte Mesembryanthemum crystallinum in comparison with the metal tolerant glycophyte species Brassica juncea. Seedlings of both species were hydroponically subjected during 21 days to 0, 25, 50, and 100 µM NiCl2. Growth parameters showed that the halophyte M. crystallinum was more tolerant to Ni than B. juncea. Malondialdehyde (MDA) content increased to a higher extent in B. juncea than in M. crystallinum. Antioxidant enzymesactivities were differently affected by Ni in both species. Nickel increased shoot superoxide dismutase (SOD) and ascorbate peroxidase (APX) activities in B. juncea, whereas these activities were reduced in M. crystallinum when exposed to metal stress. The root SOD, APX and guaiacol peroxidase (GPX) activities increased upon Ni treatments for both species. The content of non-enzymatic antioxidative molecules such as glutathione, non-protein thiols and proline increased in Ni-treated plants, except for GSH content in the shoot of B. juncea. Based on the oxidative balance, our findings confirm the higher tolerance of the halophyte M. crystallinum to Ni-induced oxidative stress comparatively to B. juncea. We suggest that M. crystallinum is able to overcome the produced ROS using the non-enzymatic system, while Ni-induced oxidative stress was more acute in B. juncea, leading this species to mainly use the enzymatic system to protect against reactive oxygen species. View Full-Text
Keywords: antioxidant systems; glycophyte; halophyte; nickel stress; phytoremediation antioxidant systems; glycophyte; halophyte; nickel stress; phytoremediation
►▼ Show Figures 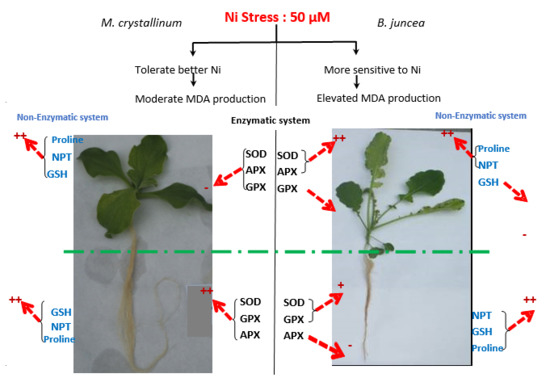