Potential of Grasses in Phytolith Production in Soils Contaminated with Cadmium

The microbial characteristics of four vegetated and one unplanted wood-chip bioreactors treating greenhouse effluent were investigated in a continuous experiment operated for over 2.5 years. The bioreactors were designed to reduce nitrate concentrations via naturally induced microbial denitrification. The vegetation type and reactor depth were both found to be significant factors in defining the mixed microbial activity. However, a consistent correlation between the abundance of the denitrifying communities and reactor depth could not be found across all reactors. The media samples from the unit planted with Typha angustifolia displayed higher microbial activities compared with the other reactors. This plant’s root-associated bacteria also demonstrated the greatest copies of the denitrifying genes nirK and nosZ. The most abundant denitrifier communities and those encoding the nosZ gene were found in the unplanted reactor, followed by the T. angustifolia unit. The T. angustifolia reactor demonstrated greater microbial activity and denitrification capacity at the depth of 20 cm, while the greatest denitrification capacity in the unplanted reactor was found at the depth of 60 cm. These findings indicated the importance of the T. angustifolia rhizosphere to support microbial community establishment and growth in the vicinity of the plant’s roots, although those populations may eventually develop in an unplanted environment. View Full-Text
Keywords: denitrification; wood-chip bioreactor; greenhouse; 16S rRNA amplicon sequencing denitrification; wood-chip bioreactor; greenhouse; 16S rRNA amplicon sequencing
►▼ Show Figures 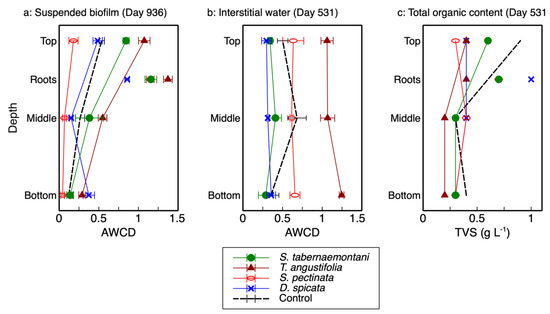