Interaction Effects of Nitrogen Source and Irrigation Regime on Tuber Quality, Yield, and Water Use Efficiency of Solanum tuberosum L.

Potential of Grasses in Phytolith Production in Soils Contaminated with Cadmium

Cadmium (Cd) is a very toxic heavy metal occurring in places with anthropogenic activities, making it one of the most important environmental pollutants. Phytoremediation plants are used for recovery of metal-contaminated soils by their ability to absorb and tolerate high concentrations of heavy metals. This paper aims to evaluate the potential of grasses in phytolith production in soils contaminated with Cd. The experiments, separated by soil types (Typic Quartzipsamment, Xanthic Hapludox and Rhodic Hapludox), were conducted in a completely randomized design with a distribution of treatments in a 3 × 4 factorial scheme with three replications. The factors were three grasses (Urochloa decumbens, Urochloa brizantha and Megathyrsus maximus) and four concentrations of Cd applied in soils (0, 2, 4 and 12 mg kg−1). Grass growth decreased and increased Cd concentration in shoots of grasses with the increased Cd rates in soils. The toxic effect of Cd resulted in production and Cd occlusion in phytoliths produced in shoots of the grasses. Grasses showed potential for phytolith production, independent of soil type, providing phytoextraction of Cd in phytoliths. Megathyrsus maximus was the grass with the highest tolerance to Cd, evidenced by higher production and Cd capture in phytoliths for the evaluated soils. Phytolith production by grasses in Cd-contaminated soils is related to genetic and physiological differences of the evaluated grasses and Cd availability in soils. View Full-Text
Keywords: heavy metal; Urochloa decumbens; Urochloa brizantha; Megathyrsus maximus; phytolith-occluded; Entisol; Oxisol heavy metal; Urochloa decumbens; Urochloa brizantha; Megathyrsus maximus; phytolith-occluded; Entisol; Oxisol
►▼ Show Figures 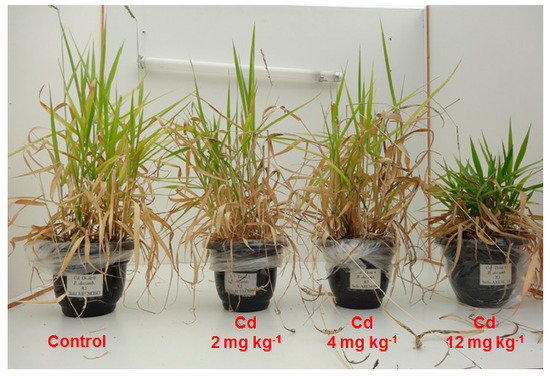