Human cardiotrophin 1 (CT1), a cytokine with excellent therapeutic potential, was previously expressed in tobacco chloroplasts. However, the growth conditions required to reach the highest expression levels resulted in an impairment of its bioactivity. In the present study, we have examined new strategies to modulate the expression of this recombinant protein in chloroplasts so as to enhance its production and bioactivity. In particular, we assessed the effect of both the fusion and co-expression of Trx m with CT1 on the production of a functional CT1 by using plastid transformation. Our data revealed that the Trx m fusion strategy was useful to increase the expression levels of CT1 inside the chloroplasts, although CT1 bioactivity was significantly impaired, and this was likely due to steric hindrance between both proteins. By contrast, the expression of functional CT1 was increased when co-expressed with Trx m, because we demonstrated that recombinant CT1 was functionally active during an in vitro signaling assay. While Trx m/CT1 co-expression did not increase the amount of CT1 in young leaves, our results revealed an increase in CT1 protein stability as the leaves aged in this genotype, which also improved the recombinant protein’s overall production. This strategy might be useful to produce other functional biopharmaceuticals in chloroplasts. View Full-Text
Keywords: cardiotrophin-1; thioredoxin; plastid transformation; bioactivity; tobacco cardiotrophin-1; thioredoxin; plastid transformation; bioactivity; tobacco
►▼ Show Figures 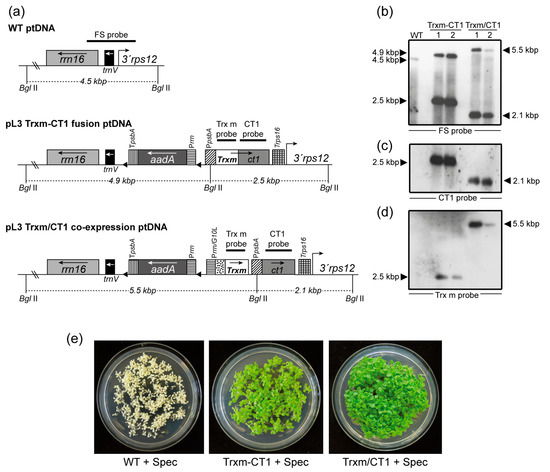