Symbionts as Filters of Plant Colonization of Islands: Tests of Expected Patterns and Environmental Consequences in the Galapagos
Previous Article in Special Issue

Maize (Zea mays L.) is an important component of global food security but its production is threatened by abiotic stresses in climate change scenarios, especially drought stress. Many multinational companies have introduced maize hybrids worldwide which have variable performance under diverse environmental conditions. The maize production is likely to be affected by a future water crisis. Potassium (K) is a well-known macronutrient which improves the performance of cereals under abiotic stresses. In this field experiment, we assessed the influence of soil applied K on the productivity of diverse maize hybrids grown under well-watered and drought stress conditions. The study consisted of three K levels viz., control (no KCl), KCl at 50 kg ha−1, and KCI at 75 kg ha−1 factorally combined with two irrigation levels (i.e., normal recommended irrigation, well-watered condition, and half of the recommended irrigation, drought stress condition) and eight maize hybrids. Irrigation was kept in main plots, potassium in subplot, and maize hybrids in sub-subplots. The results revealed that performance of the maize hybrids was significantly influenced by all three factors, and the interaction of irrigation with potassium and irrigation with hybrids was significant; results being non-significant for all other interactions. Potassium application improved yield traits and water productivity under both normal and water stress conditions but effect was more prominent under water stress conditions than normal conditions. Potassium application also alleviated drought susceptibility of all maize hybrids. In all cases, the performance of maize hybrids was maximum under potassium application at 75 kg ha−1. View Full-Text
Keywords: water deficit; biological yield; grain yield; drought susceptibility index water deficit; biological yield; grain yield; drought susceptibility index
►▼ Show Figures 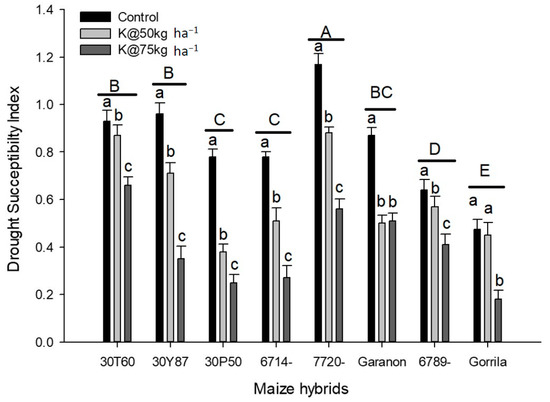