The genus Lespedeza (tribe: Desmodieae) consists of about 40 species that have high medicinal and economic value. However, in this genus, using morphological characters, the species identification is quite complicated, which can be solved by the analysis of the complete chloroplast genomes. As primary organelle genomes, the complete genome sequences of chloroplasts (cp) provide unique molecular information to study the divergence of species, RNA editing, and phylogeny. Therefore, to the best of our knowledge, for the first time, we sequenced the complete cp genomes of two representative Lespedeza species: Lespedeza davurica and Lespedeza cuneata. The cp genomes of both the species were found to be 149,010 bp in length, exhibiting the typical angiosperm chloroplast structure containing four regions. The Lespedeza cp genomes showed similar conserved gene contents, order, and orientations with a total GC content of 35.0%. A total of 128 genes, including 83 protein-coding genes, 37 tRNAs, and eight rRNAs, were identified from each genome. Unique molecular features of the two Lespedeza cp genome sequences were obtained by performing the analysis of repeats, sequence divergence, codon usage, and predicting the RNA editing sites in addition to phylogenetic analysis with other key genera in tribe Desmodieae. Using the two datasets, the phylogenetic relationship of Lespedeza species among Deasmodieae was discovered, suggesting that whole cp genomes provided useful information for phylogenetic studies of these species. View Full-Text
Keywords: Lespedeza; desmodieae; papilionoideae; fabaceae; chloroplast genome; phylogenetic relationships Lespedeza; desmodieae; papilionoideae; fabaceae; chloroplast genome; phylogenetic relationships
►▼ Show Figures 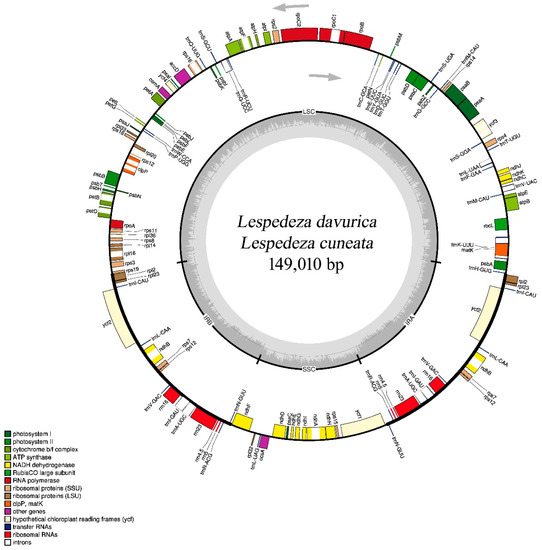