Antitumor Potential and Phytochemical Profile of Plants from Sardinia (Italy), a Hotspot for Biodiversity in the Mediterranean Basin
Next Article in Special Issue

Comparison of the Complete Eragrostis pilosa Chloroplast Genome with Its Relatives in Eragrostideae (Chloridoideae; Poaceae)

The Ca2+/cation antiporter (CaCA) superfamily plays an important role in the regulation of the essential element Ca2+ and cation concentrations. Characterization and expression analyses of CaCA superfamily genes were performed in the tomato (Solanum lycopersicum) as a representative of dicotyledonous plants and fruit crops. Sixteen CaCA candidate genes were found and identified as tomato CaCA, SlCaCA, by a domain search. In a phylogenetic analysis of the SlCaCA superfamily, the 16 genes were classified into SlCAX, SlNCL, SlCCX, and SlMHX families. Among them, Solyc12g011070, belonging to the SlCAX family, had four splice variants, three of which were predicted to be nonfunctional because of a lack of important motifs. EF-hand domains were only found in SlNCL, in addition to consensus Na_Ca_ex domains, and the region containing EF-hand domains was characteristically long in some members of SlNCL. Furthermore, four genes of the SlCCX family were found to be intronless. As for intracellular localization, one SlCCX member was predicted to be localized to the plasma membrane, while other SlCCXs, SlCAXs, and SlMHXs were predicted to be localized to the vacuolar membrane. The expression patterns of SlCaCAs in various organs, including during several developmental stages of fruit, were classified into four groups. Genes involved in each of the SlCAX, SlNCL, and SlCCX gene families were categorized into three or four groups according to expression patterns, suggesting role sharing within each family. The main member in each subfamily and the members with characteristic fruit expression patterns included genes whose expression was regulated by sugar or auxin and that were highly expressed in a line having metabolite-rich fruit. View Full-Text
Keywords: Solanum lycopersicum; Solanaceae; CaCA superfamily; Ca2+/Cation antiporter Solanum lycopersicum; Solanaceae; CaCA superfamily; Ca2+/Cation antiporter
►▼ Show Figures 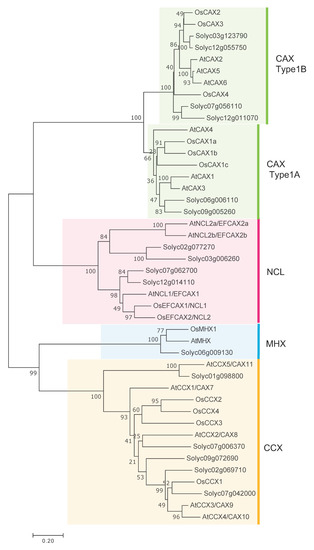