OsHKT1;1 in rice, belongs to the high-affinity K+ Transporter family, has been found to be involved in salt tolerance. OsHKT1;1 in japonica rice (Nipponbare) produces mRNA variants, but their functions remain elusive. In salt tolerant rice, Pokkali, eight OsHKT1;1 variants (V1-V8) were identified in addition to the full-length OsHKT1;1 (FL) cDNA. Absolute quantification by qPCR revealed that accumulation of OsHKT1;1-FL mRNA is minor in contrast to that of OsHKT1;1-V1, -V2, -V4, and -V7 mRNAs, all of which are predominant in shoots, while only V1 and V7 mRNAs are predominant in roots. Two electrode voltage clamp (TEVC) experiments using Xenopus laevis oocytes revealed that oocytes-expressing OsHKT1;1-FL from Pokkali exhibited inward-rectified currents in the presence of 96 mM Na+ as reported previously. Further TEVC analyses indicated that six of eight OsHKT1;1 variants elicited currents in a Na+ or a K+ bath solution. OsHKT1;1-V6 exhibited a similar inward rectification to the FL protein. Contrastingly, however, the rests mediated bidirectional currents in both Na+ and K+ bath solutions. These data suggest possibilities that novel mechanisms regulating the transport activity of OsHKT1;1 might exist, and that OsHKT1;1 variants might also carry out distinct physiological roles either independently or in combination with OsHKT1;1-FL. View Full-Text
Keywords: HKT; rice; salt tolerance; Na+ transport; K+ transport; mRNA variants HKT; rice; salt tolerance; Na+ transport; K+ transport; mRNA variants
►▼ Show Figures 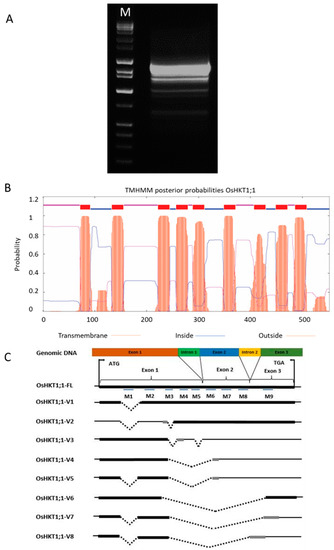